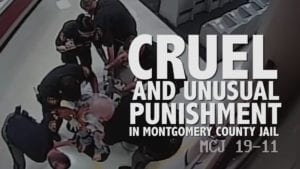 There has been a steady stream of bad news about the Montgomery County Sheriff’s Department under Sheriff Phil Plummer. I’ve covered some of it, but, there has been so much, so many different things, from his hiring of his sister to do appraisals, to the “firing” of two officers for racist texts– who weren’t really fired, but allowed to retire with disability, to the segregation of female prisoners by race, putting the black women in the old jail and the whites in the new one. All you have to do is search Phil Plummer on this blog.

In September of last year, the public learned that under Plummer, it’s not only OK to pepper spray an inmate in a 7 point restraint chair, but, that it will be covered up, and the person doing the spraying will get promoted, Sgt. Judith Sealey is now Captain Sealey. It came to light when the victim’s law firm released the footage and filed the lawsuit. Read this excellent article from the Washington Post, here’s an excerpt:

But the incident in Dayton appeared to violate widely accepted law enforcement practices.

“You cannot find any training manual that will tell you it is allowable to pepper-spray somebody who is restrained,” said Kamran Loghman, a U.S. Naval Academy professor who helped develop pepper spray for law enforcement use. “It is used to avoid confrontation or injury, so you don’t escalate to higher levels of confrontation. Pepper spray, therefore, should not be used if the subject is expressing verbal disagreement or anger.”

Source: She started the night drinking at home — and ended it being pepper-sprayed in a restraint chair – The Washington Post

Plummer, who ran unopposed last November, for a four-year term, is also the chair of the county Republican Party. The fact that the Sheriff has final say on election day under Ohio law, for issues that the Board of Elections deadlocks on, should make him ineligible to hold one or the other issue.

The issue of the pepper spraying Ms. Amber Swink, didn’t make it into the public eye until after the deadline to run against him had passed. Not that there hadn’t been plenty of other reasons to oust him. In the spring, in the strangest string of meetings in black churches, Plummer was standing there with the local Dem party leaders and union leaders, all singing the same tune against regionalization- even though it might have included consolidating some of the 20 odd police jurisdictions in the county under one department- presumably his. If his cooperation had been worked as a deal to guarantee he run unopposed, it worked. The two parties have a not-so-secret deal to not oppose sitting judges after they’ve won a seat that someone either aged out of or died holding.

Plummer whitewashed the first spraying of a restrained inmate as “an isolated incident.” His main concern was that the blue line of his department had been violated, and that the footage had been released without going through channels.

However, if you just randomly did a public records request for any footage of jailers using pepper spray on inmates, you’d get crickets. Internal sources gave me the incident report number, date, and name of the victim of the latest atrocity to come out of Phil Plummers house of horrors.

Charles Alexander Wade is no choir boy. He’s a 37 year old black man who has had his share of run ins with the law. No stranger to the Montgomery County jail, he’s asking if he’s going to be “chaired” as the deputies are removing him from the back of the State Highway Patrol cruiser, where he is lying face down across the backseat, with his hands cuffed behind his back.

The deputies even brought a hand held video camera out to record the entire booking process, in addition to the jails security video system. You will see them passing the camera around while they proceed to mis-manage their internment of Wade at 4:40 am on October 17, 2016. This was a month after the footage of Swink being pepper sprayed in restraints had been made public. If anything, you’d think everyone would be extra careful before using pepper spray on a restrained inmate, but that would only apply to competent, intelligent employees, which seem to be in the minority in Plummer’s keystone kops klink.

The footage speaks for itself. We’ve spent almost 4 days extracting the proprietary video format, matching time codes, and trying to clearly show what happened to Mr. Wade. We’ve also made available the entire video with continuous time code as a separate file. The audio came from the hand held camera, only the search room has sound on the provided video.

Why Wade bangs his head against the wall is something I wanted to ask him. My attempts at tracking him down from the addresses that I was able to access were unsuccessful. I even went and staked out the Vandalia Municipal Court on a date he was supposed to show up. I am not a private detective or a paid journalist, but, I wanted to hear his side of the story before I published this. Charles, if you are seeing this and would like to get your side out, my contact info is on this site.

I’ve been exposed to CS gas in the military. However, I don’t think it comes close to what point blank pepper spray to the face would do in terms of pain. To spray Wade once while restrained and surrounded by no less than 7 deputies is criminal/sadistic enough. The second spraying when Wade moves his hand to his face was just an excuse to be an even bigger @$$hole. That honor, belongs to Sgt. John W. Eversole/872.

There is no doubt Wade knew his rights and knew what was possible in the jail.

The only question now is who is going to  stop this kind of sadistic criminal abuse of prisoners under Sheriff Phil Plummer?

The FBI? The Justice Department? Our County Prosecutor?

For the first time, I’m asking for donations to this site to support this work, and to make sure I have money for a legal defense in case the Sheriff comes after me. I’ve been publishing this blog since 2005, there are over 2,500 posts. I’ve self-funded it all. I’ve gone after dirty congressman, pay to play politics, the local political parties, the school board, the neighborhood drug house, but this is the fist time I’ve gone after a guy who signs the license for my CCW. You can donate here https://esrati.com/donate

Here is the raw footage of Wade moving from the sallyport into the chair. If your news organization chooses to use this video, I ask that it be credited to this site- with a link to this post: www.esrati.com/deadly And here are the incident reports as a readable PDF: Charles-A-Wade-Report-esrati.com

If you enjoyed reading true breaking news, instead of broken news from the major media in Dayton, make sure you subscribe to this site for an email every time I post. If you wish to support this blog and independent journalism in Dayton, consider donating. All of the effort that goes into writing posts and creating videos comes directly out of my pocket, so any amount helps! Please also subscribe to the Youtube channel for notifications of every video we launch – including the livestreams.
Subscribe
15 Comments
Inline Feedbacks
View all comments

Charles Wade being pepper sprayed is justified! That little prick should have had his ass beat! He was a problem from the beginning, banging his head on the wall, (I like how you edited that part out!) and threatening them with his lawyer. He
was CLEARLY “baiting” them! He was TRYING to make a case by resisting and claiming “cruel and unusual punishment,” it’s a good thing they taped the whole thing, in the old days, (30s, 40s, 50s, 60s) they would have clubbed him instead of pepper spraying him whether he was black OR WHITE! This is just ANOTHER typical person who committed a crime and doesn’t like the consequences!

@Jeff- welcome to Esrati.com. Unfortunately, you are wrong, pepper spray isn’t indicated here. He was in restraints. The number of officers present was more than enough to keep them safe. The use of pepper spray is purely a misuse of power and authority.
Believe it or not- jails are places where people who are mentally ill, drunk, disabled, low IQ, etc- show up. Their actions under stress are unpredictable and irrational. That doesn’t ever make torture a viable option for the jailers.

[…] really proud of two posts in particular: esrati.com/deadly which proved that pepper spraying people in restraints wasn’t a one-time thing in the jail, […]

Forums on Media and Democracy that aren’t forums | Esrati

[…] For the instances like when I uncovered that Dr. Adil Baguirov didn’t live in the Dayton Public Schools district and shouldn’t have been allowed to serve- or run the contracts the way he did for the sale of the Patterson Co-Op site or the bus deal. See http://www.esrati.com/manofmystery to start. Or, the torture in the jail http://www.esrati.com/deadly […]

[…] living in the school district or my fight for his removal. Just like they ignored my story of the second on-camera pepper spraying of a restrained inmate in the Montgomery County Jail (until they could get their hands on the footage I’d already released- two weeks […]

[…] When I last ran for Dayton City Commission in Nov of 2019 my first issue was to have a safe jail (and this was pre-covid-19). Many people told me that it was a county issue, and I didn’t know what I was talking about. Unfortunately, a majority of the people in the jail are usually City of Dayton residents, and I don’t believe a visit to the jail should be a possible death sentence- or a macing while restrained. […]

Why is Phil Plummer in the State House instead of the Big House? | Esrati

[…] the appointed incumbent. If you need a reminder of how bad things are and were, go read this post: Cruel and unusual punishment in the Montgomery County Jail, watch the video again […]

A letter from the Montgomery County jailers | Esrati

[…] being arrested for corruption). After the two known pepper sprayings of inmates in restraints (see http://www.esrati.com/deadly) a few deaths and multiple cases of abuse (I’ve got a prisoner getting his leg broken by […]

The DDN took about two weeks to cover this- as did the Washington Post- neither gave credit.
https://www.washingtonpost.com/news/post-nation/wp/2017/02/15/video-shows-ohio-officers-pepper-spraying-a-person-in-a-restraint-chair-again/

Out of failure, the roadmap to the future | Esrati

[…] fact that AFSCME supposedly backed the criminal Phil Plummer for election- when Plummer should be in prison for his torture of prisoners in his jail is criminal. The fact that the party couldn’t capitalize on this- and elect Leronda Jackson […]