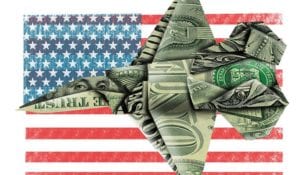 Trump says the F35 costs too much. Congressman Turner has never met a weapons program, especially one run out of his district, that he’s not in love with. The F35 is a mythical air superiority, one size fits all services, fighter, that was obsolete before it ever flew. A unicorn is a mythical creature that allegedly looks like a horse, but has a single large horn protruding from its forehead.

On 13 June, 1944, the Germans sent the first V-1 across the channel to bomb London. This was a week after the Allies had landed on Normandy. V stood for Vengeance. 1 was because it was first. The first crude cruise missile, long before microcomputers, GPS, and laser guidance systems were developed.

The modern cruise missile can deliver a larger payload, across longer distances, faster and can be retargeted in flight. It was the beginning of the end of the need for slow, large, manned bombers.

The Air Force, run by pilots, high on testosterone and brainwashed by watching the movie “Top Gun” too many times, still believe that battles in the sky are won by men in cockpits. They’ve pushed for newer, faster, stealthier, more lethal, planes even though the Germans were smart enough to take their pilots out of danger to deliver bombs back in 1944. The Japanese, who hadn’t yet become the geniuses to give us the Walkman and the transistor radio, gave up on the idea of trying to bring their pilots home and invented the Kamikaze, a one way ticket to Valhalla, as a desperation move to do what the Germans were doing without a guy in the sky.

The F35 is our Kamikaze, no matter what the technology, no matter what the price. There is no sane reason to put a human in a plane to go battle with other aircraft. The future, is in drones/unmanned aerial vehicles/remotely controlled aircraft. Yes, that thing you bought the kids for Christmas for $49.95 is the entry level air superiority fighter. Just add a few million more, and you have a craft that can go faster, farther, deliver more payload, and pull as many G’s in a turn as you want- because without a pilot in the plane, you don’t have to worry about the fundamental limitations of humans- they weren’t meant to go on a roller coaster without rails traveling at mach 2. Typically a fighter pilot is trained to manage up to 9g’s in very short bursts. Much longer, and the risks become deadly.

For those of you who don’t comprehend mach 2, it’s 1534.54 miles per hour, twice the speed of sound. The fastest roller coaster in the world right now tops out at 150mph, and may max out at 4-5 G’s for very short periods of time.

Remotely controlled vehicles don’t care how many G’s they pull or how fast they go. They can even be disposable, just like Kamikaze pilots. This is, and has been the future of warfare, and the defense industrial complex doesn’t care. They want to sell us the most expensive buggy whip ever in the day of the electric, self-driving car.

The F35 pilot is equipped with a helmet that costs over a half-million dollars each. It’s a marvel of technology- by turning his head to the floor- he can see through the bottom of the plane and what’s below, swivel his head back- and he can see all the way behind him, look at something- and mark a target- all while flying at hypersonic speeds, but why? All this information can feed a pilot on the ground- far away- or not feed a human being at all. We know what the enemy looks like, just program the computer to kill it.

Unfortunately, while President Trump knows the public has been getting shafted with cost overruns and on the most expensive weapon ever, he thinks that shaving 20% off the cost changes things and makes it better. It doesn’t. It just makes it a cheaper coffin for our pilots who will be facing hordes of unmanned craft that cost next to nothing comparatively and can pull 20 G’s and not pass out.

Last summer, I sat down with Moshe Arens, former ambassador to the United States from Israel, and their 3 time defense minister. He’s an aeronautical engineer by training, and was a staunch opponent of Israel buying the F35 (he lost that by one vote). His answer was a much less expensive plane built and flying with Israeli battle tested technology, that first flew in 1986. The Lavi was cheaper, single mission, and higher tech than what had been proposed by the US. However, Arens lost his battle by one vote, with Israeli politicians believing that by helping the American military industrial complex get what they want, Israel would solidify its interdependence with the US.

While Trump is asking to look to an upgraded F18, maybe, he should be looking to the Lavi, or to the Swedes who went the low cost route with the JAS 39 Gripen, of course, either of these aircraft wouldn’t come with nice fat campaign donations that fund chicken hawk politicians like Turner’s campaign. Lockeed Martin is his number one contributor, and the defense industry is his number one segment.

As always, follow the money. In 2018, the Montgomery County Democratic Party must run a better candidate against Turner, or realize that we’re just backing turning our pilots into kamikazes instead of winning battles so that Mike can have money to continue to be your congressman suck up to the defense industry.

You don’t have to believe in unicorns, or vote for Mike Turner, or believe that the F35 makes us safer. It just costs a lot, like President Trump keeps saying. If he wants to drain the swamp, killing the F35 would be a good start.