When Robert Scott stepped down as chair of the Montgomery County Republican Party last October, the party machinery didn’t quite work the way it was supposed to. Typically, there is an order of ascendency, and the vice chairmen would become chairman. , and next on the pecking order was Dave Landon who should have been made party chair- but since he was already on the County Patronage Payroll at the Board of Elections and couldn’t be party chair and get paid, so he abdicated as well.

Apr 23 see comment below- Co-chair was Kate Burch, who stepped down, leaving Landon, who couldn’t and then second vice-chairman, Nick Brusky, who should, technically be leading the party

There should have been an election, with a quorum of the Precinct Captains voting. A quorum is 50 percent plus one of the central committee. That meeting/election never took place. For a very short period, Landon was representing himself as acting party chair. See this PDF of the filing with the Ohio Elections Commission case about the “endorsement” by the party of a candidate, even though the party wasn’t actually functioning at the time: Landon at Ohio Elections Commission 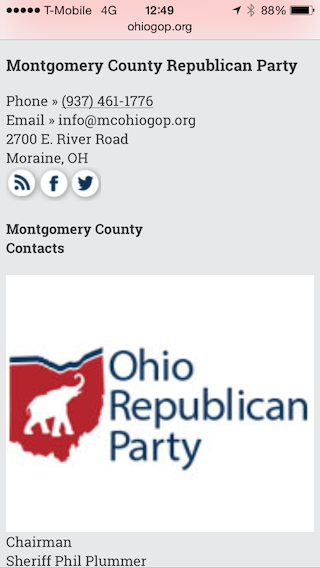 Somewhere along the line, Landon realized he could lose his high-dollar job, and then Montgomery County Sheriff, Phil Plummer anointed himself  chair. Never mind the election wasn’t held, thereby breaking state law, but it is highly unlikely that Plummer would be able to get the votes, since Scott took over the party by getting a majority of the precinct captains elected who supported his brand of Republicanism. It was a message that the good-ole boy days were over, and yet, that’s exactly who is back in power now.

While the equally dysfunctional Democratic party in town can laugh about all this, there is one major problem with having the sheriff as the head of one political party in Ohio- he’s the guy you call when you have an election day problem. Yep, the person who is to enforce order on election day, the one you call if someone is within 100 feet of the polls doing electioneering, the one who oversees the safe transportation of the ballots- is the sheriff in Ohio.

You need to read this Memo from Secretary of State Jon Husted  of October 22, 2013, outlining the Special Powers and Responsibilities of Sheriffs on Election Day via http://www.sos.state.oh.us/sos/upload/elections/memos/2013/2013-10-22.pdf

“Election officials are charged with preventing violence and disorder at the polls and may call upon the sheriff or other peace officers to aid them in enforcing the law, including the arrest of violators.
The sheriff has a statutory duty to respond immediately to such a request.”

“At least one policeman shall be assigned to duty in each precinct on each day of an election, when requested by the board or the secretary of state. Such police officer shall have access at all times to the polling place, and he shall promptly place under arrest any person found violating any provisions of Title XXXV [35] of the Revised Code.”

Mixing politics with his elected duties is not only a very large potential conflict of interest, it also opens a big can of worms if something ends up in court. Plummer should resign as party chair, or as sheriff immediately.

Right now, Plummer has one of his officers, a “Detective of Special Investigations” J.M. Clymer, out doing the Ohio Democratic Party’s dirty work. Although the Board of Elections has already accepted the required number of signatures on petitions submitted for Larry Ealy, the long-shot Dem candidate for governor in the upcoming primary, Plummer’s pogue is out trying to harass Ealy’s circulators with the threat of felony charges for submitting questionable petitions. Considering that current Dayton City Commissioners have turned in petitions with as many as 40% failing signatures, why these circulators are being harassed is questionable, and the credibility of Plummer’s office in the case is nil. You can’t be a political party chair and the criminal investigator for election law at the same time.

The Dayton Daily news has written about this investigation twice- even trying to infer that one of the circulators had a previous case for election fraud- stemming from a questionably legal eminent domain case in Moraine and his attempt to vote once he was made homeless. Here is what they published on Feb 18:

Petitions to run for governor submitted by Trotwood resident Larry Ealy were forwarded to Ohio Secretary of State Jon Husted for investigation of possible fraudulent signatures, said Steve Harsman, deputy director of the Montgomery County Board of Elections.

Husted spokesman Matt McClellan said the office had not yet received the complaint, but would ask the local board to do the formal investigation in conjunction with the Montgomery County Prosecutor’s office. Harsman said election falsification is a fifth-degree felony. The maximum penalty for a fifth-degree felony in Ohio is 12 months in prison.

via Fraud probe launched in candidate’s run for governor | www.mydaytondailynews.com.

My only question is who is going to investigate Plummer- our illegitimate Republican Party Chair/Sheriff who has illegally elected himself? Shouldn’t that be a fifth-degree felony as well?

If you enjoyed reading true breaking news, instead of broken news from the major media in Dayton, make sure you subscribe to this site for an email every time I post. If you wish to support this blog and independent journalism in Dayton, consider donating. All of the effort that goes into writing posts and creating videos comes directly out of my pocket, so any amount helps! Please also subscribe to the Youtube channel for notifications of every video we launch – including the livestreams.
Subscribe
5 Comments
Inline Feedbacks
View all comments

Just to state for the record, I Second Vice Chairman of the Executive Committee, which is fourth in the line of succession for Party Chairmanship. The first in line was the Co-Chair Kate Burch, then Dave Landon, then me.

Generally in County Republican Organizations in Ohio the person who has most of the power is the Chairman of the Executive Committee. The Central Committee Chairmanship is generally more of a ceremonial role.

Is this the same sheriff that dropped the investigation a few years ago into the 600 provisional voters who current director Harsman and former director Smith only gave 1 page of a two page ballot to and covered it up? Now he is investigating some petition related issues? This county is so corrupt. It would have been so hard for Sheriff Phil to get the archived digital optical scan report that shows how many page one and page two ballots were counted in each precinct in that 2006 botched election lol. He also knows about the voting equipment Harsman stole from Diebold when the county switched to electronic voting. He certainly does not support integrity in elections or current director Harsman would have faced criminal charges for screwing up those ballots and a whole lot more! Glad I am not part of the republican party anymore.

I appreciate David Esrati addressing this issue regarding propriety of Phil Plummer being both the county sheriff and Montgomery County Republican Party chairman. I particularly appreciate David raising the issue in April–a full six months prior to the general elections. The MCRP has plenty of time to fully investigate the propriety and legality of Sheriff Plummer holding both positions, and plenty of time to clearly explain the logic, legality, and appearance to citizens. If actions need to be taken, now is the time for action. If the investigation is not done and results are not adequately reported in the near future to the satisfaction of the citizenry, then the MCRP is offering the MC Democratic Party an “integrity” issue to run on in the autumn. I strongly recommend influential citizens of the county impose on the sheriff/chairman to take appropriate action and justify that action NOW. If such action is not taken, almost all of us can be amused as we watch MCDP do its duty in October.

[…] to the DDn to run a story soon on the questions raised in my last post about the sheriff being the head of the local Republican Party. Whether it cites the article as breaking the story or not is yet to be […]

Cruel and unusual punishment in the Montgomery County Jail – Esrati

[…] last November, for a six-year term, is also the chair of the county Republican Party. The fact that the Sheriff has final say on election day under Ohio law, for issues that the Board of Elections deadlocks on, should make him ineligible to hold one or the […]