“Give me liberty, or give me XXXXX”- I’m sorry, Patrick, discussions about death may offend the living, we can’t have that kind of discussion on our ad platform. Can you re-edit your ad for the revolution please.
~Facebook

What supposedly separates the United States from the evil Soviet’s and Communist Chinese is that political speech isn’t censored. It’s what makes this “the greatest country in the world”- except, now, we have a private corporation, run by one of the richest people in the world, telling David Esrati that talking about the cruel and unusual punishment in the Montgomery County Jail is unacceptable.

For less than 2 seconds, his campaign ad #TruthToPower showed footage from the video he released on 2 Feb 2017, showing Phil Plummer’s “Corrections Officers” pepper spraying Charles Alexander Wade while he was tied down in a restraint chair. Point blank use of pepper spray, not just once, but multiple sprays, while Wade was surrounded by 5 officers and unable to move. Wade’s lawyer hadn’t been able to get this video, yet Esrati worked weeks to edit together an honest, clear and fair presentation of the abuse. Within a day of release, NowThis had taken the raw footage and recut it for sensationalism and received over a million views– on Facebook. It now has 1.8M views, 6,193 Shares, and 1.2K comments. Yet, what NowThis can do- Esrati can’t show and use to promote his post to voters over 18.

Esrati believes that the jail should be a safe place, where inmates aren’t raped, pepper sprayed, denied medical treatment resulting in death etc. All those things and more have happened, and yet, the Dayton City Commission is still allowing our citizens to be sent there. The County has paid millions in settlements so far, with more on the way.

Washington — Facebook founder and CEO Mark Zuckerberg said Wednesday he didn’t know anything about his website’s rejection of an ad from a Michigan political candidate, suggesting the social-media platform may have made a “mistake.” 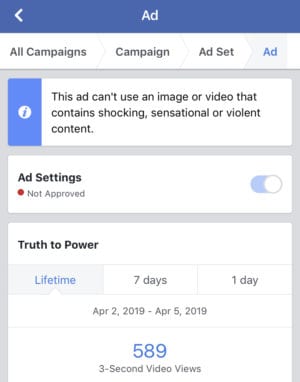 At a House hearing, U.S. Rep. Fred Upton, R-St. Joseph, asked Zuckerberg why former state Rep. Aric Nesbitt’s campaign announcement for the Michigan Senate would have been rejected for allegedly containing “shocking, disrespectful or sensational content, including ads that depict violence or threats of violence.”…

“Can you assure me that ads and content are not being denied based on particular views?” Walberg asked.

“Yes, politically,” Zuckerberg replied. “Although when I hear that, I hear normal, political speech. We certainly are not going to allow ads for terrorist content, for example. So we’d be banning those views.”…

Zuckerberg said he understands where that concern comes from “because Facebook and the tech industry are located in Silicon Valley, which is an extremely left-leaning place.”

“This is actually a concern that I have and that I try to root out in the company — is making sure that we do not have any bias in the work that we do, and I think it is a fair concern that people would at least wonder about,” Zuckerberg told Cruz.

The former presidential hopeful asked whether Zuckerberg knows the political orientation of the 20,000 people engaged in content or security review for Facebook.

“No, senator. We do not generally ask people about their political orientation when they’re joining the company,” Zuckerberg replied.

GOP South Dakota Sen. John Thune, who chairs the Senate Commerce Committee, asked Zuckerberg for assurance that when the company improves its tools to weed out “bad actors,” that it “errs on the side of protecting speech, especially political speech from all different corners.”

Zuckerberg said it is Facebook’s approach.

“If there is an eminent threat of harm, we’re going to take a conservative position on that and make sure that we flag that and understand that more broadly,” Zuckerberg responded.

“But, overall, I want to make sure that we provide people with the most voice possible. I want the widest possible expression, and I don’t want anyone at our company to make any decisions based on the — the political ideology of the content.”

Neither the New York Times or the Washington Post seemed very interested in covering this political censorship. Once again, I have to be the only conscious defender of free speech and the First Amendment. I’ve also reached out to the ACLU, who has never been willing to help me, but is fine with using my mask case to defend the KKK’s right to wear a mask.

Unfortunately, George Orwell predicted all of this. If you want something to wear, consider our shirts: “Make Orwell Fiction Again.”