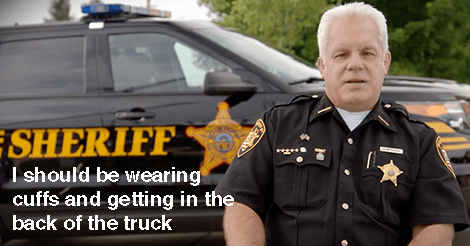 Female prisoners in the Montgomery County Jail are being segregated with the black females being most likely to be locked up in the old jail, with bars and limited privacy, while white women are in the new jail, with pods and a modicum of privacy.

This is only one of the problems in the Montgomery County Sheriff’s office, which is currently dealing with multiple issues- like having a white Major refer to a black correctional officer as “a thug” in a recorded meeting, the pepper spraying of a restrained prisoner, and the ongoing issues of nepotism that run rampant in the Republican branch of the Monarchy of Montgomery County.

Sadly, the Sheriff, Phil Plummer, who is also the Republican Party Chairman (which should be illegal, since in Ohio, the final word on election issues on the day of the election is the sheriff) is running unopposed this fall.

This isn’t the first brush with racism in the Sheriff’s fiefdom, two of his trusted people were fired last year because they had been exposed for exchanging racist text messages. Three others were “disciplined.”

But it would seem that screwing up is the fastest track to promotion under Sheriff Plummer.

We first found about Tom Flanders when he was a Sgt. shredding documents that were key to an investigation on the Sheriff’s sister being hired as an appraiser. Then, Captain Flanders was supposedly fired for the racist text messages, but he really wasn’t- because instead, both he and the other “fired” officer took full medical retirement. It pays to be a bad cop in the Sheriffs office.

Somehow, the good ole boy network in blue never lets one of their members down.

But it’s time for the Sheriff to trade in his badge for stripes for a stay in his own jail. How else do you explain how the Black female Sgt, Judith Sealey, with the itchy finger on the pepper spay, is now a captain? Maybe it’s because Plummer needs to show a little bit more diversity in his jail where there are over 100 employees with only a dozen or so of color? Or maybe, he was hoping to keep her quiet and that the tape of the criminal action would disappear. That may be the most expensive can of pepper spray in Montgomery County by the time the taxpayers finish paying for the lawsuit that’s coming. Had the “screaming inmate” had asthma- we’d be looking at murder charges. Flat out- you don’t pepper spray someone in restraints, but apparently, in Phil Plummers world, do it and you get promoted.

When a black corrections officer brings up the issue of the segregation of female prisoners- and gets a reprimand instead of a “thank you for pointing that travesty out, I’ll get right on it.” You know there are problems. The racial segregation of prisoners alone is an issue, but putting the blacks predominantly in the old section of the jail makes it clear that some prisoners are less equal than others. That section, has the old style bars and shouldn’t even be in use- apparently it has some kind of grandfather clause that allows them to use it. Yet, putting the white women, who make up the majority of the female inmates, in the new pods section should be clear evidence that this isn’t random.

What we need is a special prosecutor to come in to investigate the MCSO from top-to-bottom.

Instead, Plummer thinks that an internal investigation is appropriate. Right there should be a clear indication that he’s lost touch with reality and is unfit for office;

The Montgomery County Sheriff’s Office is investigating Maj. Scott Landis amid allegations of inappropriate language he allegedly used while talking about a black corrections officer.

Why would you even think of an internal investigation? And as to allegations, this one is on tape, it’s as easy as push play.

There is a small group of righteous correctional officers that have had enough. Some have gone to attorney Michael Wright for representation. There are bound to be more things coming to light as time goes on.

The housing records are very easy to pull up and look at, with the location, age, race of the prisoner all clearly marked. Even if the Sheriff tries to have the computer files wiped, I’ve got a stack of printouts of the assignments that can be verified without any access to the Sheriffs records.

It’s time to get a new sheriff in town. Our current one is either grossly incompetent, or a racist.

The SCLC will be holding a press conference on Wednesday about their grievances with Sheriff Plummer.

For a better understanding of the pepper spray case- read this excellent Washington Post article: https://www.washingtonpost.com/news/post-nation/wp/2016/09/14/i-thought-i-might-die-disturbing-video-shows-woman-in-restraint-chair-being-pepper-sprayed/?utm_term=.e35b20d4fa13

And once again- the Dayton Daily news gets their stories from Esrati.com
Front page of today’s paper- story on the “medical retirements” of Flanders and Sollenberger

Then of course there is this story today! http://www.daytondailynews.com/news/crime–law/sheriff-office-investigating-racial-segregation-claim-jail/6pTlZOiYXv9MnB4jmF6xiM/

You read it here first folks-
today the DDN follows up:

It would be very interesting to know if the Judges have reviewed the jail policies and approved of this practice!!!

Pursuant to Ohio Revised Code § 341.02, the Sheriff shall keep a jail register in the office of the jailer, and delivered to the successor in office of such jailer, which shall include the name of each prisoner, the date and cause of his commitment, and the date and manner of his discharge. The Sheriff or jail administrator shall prepare written operational policies and procedures and prisoner rules of conduct, and maintain the records prescribed by these policies and procedures in accordance with the minimum standards for jails in Ohio promulgated by the department of rehabilitation and correction. The Court of Common Pleas shall review the jail’s operational policies and procedures and prisoner rules of conduct. If the Court approves the policies, procedures, and rules of conduct, they shall be adopted.

And once again- the Dayton Daily news gets their stories from Esrati.com

You give yourself too much credit for being and idiot.

Cruel and unusual punishment in the Montgomery County Jail – Esrati

[…] racist texts– who weren’t really fired, but allowed to retire with disability, to the segregation of female prisoners by race, putting the black women in the old jail and the whites in the new one. All you have to do is […]

[…] They did list 7 other lawsuits/settlements in progress at the jail. And, they took credit for the story they stole and didn’t credit from my blog: […]