There’s a reason you haven’t seen a post here for a few weeks. I’ve been busy working on an appeal of my case against the Dayton Metro Library to the Ohio Supreme Court. I also took a Tesla Y trip to Phoenix and back, hosted a 41st High School reunion and had kidney stones removed, complete with a DIY ureteral stent removal.

Today, I filed the appeal. I’ve been told I have zero chance of the Ohio Supreme Court hearing it. That’s too bad, because, it’s not really about the library turning over the security camera tapes – which they never did properly, or in a timely matter. That’s just the mechanism to bring to the attention of the Supreme Court, the criminal enterprise running Montgomery County that I’ve called the “Monarchy of Montgomery County” for years.

We have a prosecutor who prosecutes what he wants and persecutes who he wants.

My case, with a ton more evidence- “no true bill” and all I have is a civil judgement for $70,000 and can’t find a lawyer willing to do a debtor’s exam. See Esrati v Selhorst: Montgomery County Common Pleas 2018CV03192

Now, I’ve been told by the prosecutor that I’m just whining when I ask for the video supplied out of the multi-million dollar library video surveillance system within 2 years of being illegal escorted out of the library. I had 2 years to file a federal civil rights case- and at the time of filing, I’d still not seen the video. By the time I settled, I still hadn’t seen the video. Didn’t give me much bargaining power. Read about the settlement here: $39,446 says you can take photos in a library or in public

The point is, Judge Gerald Parker is part of the problem. He got his judgeship for life, and will do whatever the Prosecutor tells him to do- including not award my legal fees- and definitely don’t give me the video either, because, that could up the settlement amount. Shame on the 2nd District Court of Appeals judges who are also as ignorant about the Sunshine laws- and what time code is. They too- get their seats for life- and will do anything to protect their not so secret pact of never being challenged. Epley, Hall, Tucker- you three, along with Parker, should all be removed from office and disbarred. Nothing in any of your decisions made any sense when ran through the filter of the Ohio Yellow Book and the Sunshine Laws. You are part of the corruption. The facts that were never allowed in court were that of course the system outputs time code- and has the ability to redact faces etc- however the redaction wasn’t pertinent to the case at all, nor does it take a year to redact. It’s built into the system- and I had evidence to prove it. The sideshow about legal procedure was criminally frivolous behavior by all involved.

But, it’s not just what the Monarchy has done to me.

It’s about all the things they never did a thing about.

Or our “International Man of Mystery” Dr. Adil Baguirov. I identified that he didn’t live in the Dayton Public School Board and was illegally serving on that board. No one would remove him. He’d committed voter fraud. So what? He’d involved himself in self serving contracts. No problem. He’d never disclosed all of his companies on his Ethics forms- missing the cool quarter million that he received by the way of the “Azerbaijani Laundromat” to one of his shell companies. I had to threaten a fake lawsuit to get him to resign. No one else would lift a finger. And then he gets to run for county recorder? How does this happen? When the power brokers can’t be bothered with enforcing the law.

You don’t have to get me started on the Joey Williams case- part of the “culture of corruption.” Williams took payola for a patio in exchange for promising contracts. somehow, only Black people are capable of corruption- no one from city hall or CityWide gets busted. Despite turning CI for the FBI long before the indictment (as a deal to spare his kid from seeing Dad get perp walked out of city hall, he got to delay it all until Jr. graduated from Stivers) he had already acknowledged his guilt long before he ran for re-election, with the agreement that if he won, he’d resign. The Feds should be indicted for not reporting the crime in a timely manner. They literally ran a crook for office. What’s worse, Williams, while wearing a wire (and possibly others) made tapes of Dayton’s Mayor Nan Whaley. Those tapes were played to the same Grand Jury that indicted Williams, Winburn, Luckie and Higgins. Nan was a suspect. We, the public have a right to know what she was talking about- and if it was city business, it’s a violation of Ohio’s Open Meetings act. She declined to run for re-election as Mayor- possibly because she’s a CI now- or because she’s already done her own deal. But, in the mean time- the only person fighting to get those tapes released is me- and she’s busy bilking donors out of millions in campaign donations for her governors race. All of this is well documented on this blog. See this link: “Culture of Corruption”

This wasn’t my first Sunshine laws case. I’d had another for the Dayton Public Schools task force. Didn’t matter that I had video evidence in droves, you can’t find a lawyer to take a case against the monarchy in the county. In this case, Judge Dick Skelton did the dirty work of voiding evidence by not admitting it. I shouldn’t need a law degree to maneuver these cases – according to the “Yellow Book” – but here in Montgomery County, no amount of facts matter as long as judges are protecting themselves. See this case: DPS: Special meetings are to avoid scrutiny Knowing the law doesn’t matter if the law won’t follow the law. 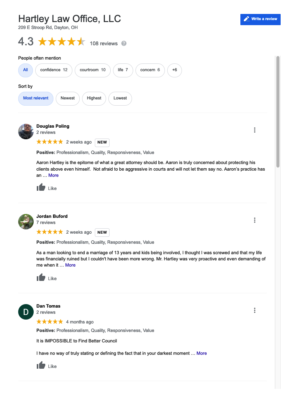 Don’t mention that my law license is currently suspended

Speaking of law- Kettering Attorney Aaron Hartley is now suspended from practicing law by the Supreme Court of Ohio. You’d think that with their orders to stop practicing, he’d have to take down his website and his google business listing? Hell no. Do you think they might find it interesting that he’s still getting 5star google reviews posted (that he has to approve to appear) after he’s been suspended? Probably not- it seems judges in Ohio are technological idiots. You know- multi-million dollar security camera systems don’t provide time code…

I posted the 3 page document of his suspension along with notice that the office is closed weeks ago. Google and Hartley did nothing. I’ve called the Ohio Supreme Court Ethics office- they refuse to return calls or do anything. This goes to show that when you’re an insider in the Monarchy- you are above the law in Montgomery County.

I left out some of my other examples of investigative journalism that should have had politicians in the pokey instead of in office- like the one where County Commissioner Debbie Lieberman looks the other way while her “assistant” John Theobald, steers no-bid contracts to her reelection campaign ad agency. He later goes to work for them- and gets appointed to the Montgomery County Veterans Service Commission as a going away gift. See When the wrong answer and no response spells corruption and coverup note- the MCVSC pays $10K a year for 2 meetings a month. Nice gig if you can get it.

If the Supreme Court does decide to do it’s job, the FBI and the DOJ should circle the county building, city hall, and the courts and start hauling these criminals up in the largest public racketeering investigation since Tammany hall.

Here’s what I filed. Let’s see if anyone pays attention.

What?!? You can’t find a lawyer to help you? You’re so well loved and respected in this community that I can’t believe people aren’t lined up to make sure Davids diapers aren’t changed. ?

Can we schedule a meeting ?