The announcement came on Thursday the 22nd- which is a day earlier than normal.

The Board wants to meet Thursday February 27, 2018 at 5pm to have an: “Executive Session to consider the employment, dismissal, discipline, or compensation of public employees and to investigate charges and complaints against a public employee.

The Board may choose to reconvene in public session for the purpose of conducting a public vote.”

That’s boilerplate text- and my guess is this will be where they make Dr. Elizabeth Lolli the Superintendent, with a multi-year contract, without public input, without asking the community how they feel about her, or where there is any opportunity for anyone else to apply.

And you know what? That’s just fine, because after I’m done with my lawsuit- and the judge finds that the Task Force met in violation of the Sunshine laws, Lolli, Burton, Abraha, Al-Hamdani, Walker and Harris, will all be unable to take action on closing any schools- because they discussed the issue in an illegal meeting.

Unfortunately, this board is just as much of a mess as the last board, despite their shorter meetings.

Unfortunately, there was only one board member actively engaging the community, Jocelyn Rhynard. The other board members, Walker, Al-Hamdani, Harris and Commissioner Mims, all stood off to the side, either talking to each other, or observing. Same can be said of Lolli, and DPS communications guru Marsha Bonhart.

As I walked from table to table, group to group, I recognized people at every table. And I kept thinking to myself, if David Lawrence was Superintendent, one, we wouldn’t be having a community in an uproar, because he actually understands and knows the issues and the community members- but, that he’d have his sleeves rolled up and be actively engaging and learning from the groups.

That’s why we need to have a board that comes clean on its plans for a superintendent in advance, and give the community an opportunity to weigh in.

Just remember, another man the last board passed over to hire Rhonda Corr – went to Springboro schools, which had been in turmoil, and brought order and pride back to a challenged district. That man, Dan Schroer, also managed to get Springboro to pass a levy on the first try ever.

I warned you about what would happen with Joey Williams. I’m warning you again, this board doesn’t understand open and honest communications, and as long as they feel the need to keep pulling secret meetings, emergency meetings, they will never earn the trust of the community.

And they won’t move this district forward. 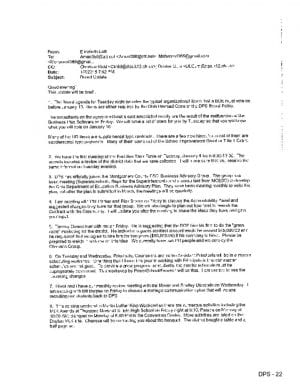 Before Al-Hamdani is in office, only he and Harris are in the loop

In the 171 pages of internal communications they released to me through a public records request- there was this gem from Elizabeth Lolli to Bill Harris’s private email and Al-Hamdani’s private email before Al-Hamdani had even taken office:

2. We have the first meeting of the Facilities Task Force on Tuesday, January 9 from 9:30-11 :00. The agenda includes a review of the district data that we have collected. I will make sure that you receive the same information Tuesday evening.

3. DPS has officially joined the Montgomery County ESC Business Advisory Group. The group has been meeting (Superintendents, Reps for the Superintendents and a consultant from MCESC) to develop the Ohio Department of Education Business Advisory Plan. They have been meeting monthly to write the plan, but after the plan is submitted in March, the meetings will be quarterly.

4. I am meeting with Phil Parker and Rick Stover on Friday to discuss the Accountability Panel and suggested changes they have for that group. We will also begin to plan out how best to rework the Contract with the Community. I will update you after the meeting to share the ideas they have and gain your input.

5. Tommy Owens met with me on Friday. He is suggesting that the BOE hire his firm to do the “grass roots” marketing for the district. He indicated a guess contract amount would be around $45,000.00 and he requested that we agree to hire him for two years ($90,000.00) if his company is hired. Please be prepared to weigh in with me on this idea. We currently have two PR people and we employ the Ohlmann Group.

7. Hiwot and I have our monthly review meeting with the Mayor and Shelley Dickstein on Wednesday. am meeting with Bill Burges on Friday to discuss a strategic communications plan that will include recruiting our students back to DPS.

What do you need to know about this: The Facilities Task Force is a district committee- being given privileged information. The district is now part of the Montgomery County ESC advisory group- the same ESC that I was denied the ability to serve on the board of. Lolli is making a beeline for Phil Parker of the Dayton Chamber of Commerce and Rick Stover– who is tied to everything business interest in Dayton- including CityWide Development. She’s talking to Tommy Owens – about marketing, when she wouldn’t talk to me, and also meeting with Bill Burges from Cleveland- who ran the campaign for “The Slate” of Harris, Al-Hamdani, Wick and the unfortunate loser Paul Bradley.

Used to be this had to go through purchasing- because it was mandated- now, we can just hire at will. BTW- someone find a company website for Tommy Owens please? I can’t find it.

But, then again, 3 of the board members were involved with hiring Rhonda Corr over David Lawrence and can’t admit they made a mistake. And four new board members don’t know what the Sunshine laws are.

Same screwed up situation, different actors. Sorry people, Tricks are for kids, not the way you move a district forward.

Dayton schools are broken beyound repair. The leadership is steeped in ineptitude and unworthy of trust.
Parents should move out of the district for the sake of your children. The schools will never function.

With all the self-righteousness you forgot to beg for subscribers to your YouTube channel so you can monetize it.

Looks like you have a troll. LOL Those who can’t troll.

Someone w/a little dick just can’t handle the truth. Isn’t that what trolls are? I wake up everyday grateful I can read about what is really happening in Dayton via your blog. Keep kicking arse!

No troll… just not ignorant to blindly believe what this person says. Nice try though.

[…] when push comes to shove, and a camera is pointing his way, all of a sudden he follows them. See DPS: Special meetings are to avoid scrutiny. To think that Commissioner Joey Williams did anything without the tacit approval or collaboration […]

“David Esrati [not endorsed]” and what it means. | Esrati

[…] that current Montgomery County Dem Party chair, Mohamed Al-Hamdani was illegally conducting meetings bef…– and then went on to conduct more. This is the fool that hired Libby Lolli as Superintendent- […]