This is non-pandemic news. As civil rights laws are being trampled in the name of saving the human race, some of you may ignore this. Some may think it’s not important when people are dying from something we can’t see. And, like it or not- civil rights are something most of us don’t think about until we stop having them. So, ignore at your own peril.

It was a year and a day after my father’s death that I decided to take a Saturday off to reflect back on his life, and what he stood for. I was going to take a walk downtown and take photos- a hobby that started when I was around 6 and Dad gave me a Kodak Brownie. At 12, his step-father, gave me a Topcon 35mm camera, I was in heaven. Two years later, I bought an Olympus OM-1 and started to build a darkroom. Photography is one of my guilty pleasures.

That was August 19, 2017, and I made the mistake of using my constitutionally protected rights to take photos in the new downtown Dayton Public Library. A $68M boondoggle that is more about meeting spaces and internet access for the poor than it is about books.

I was challenged, harassed, called a pedophile, removed and banned from the library by library guards hired from G4S Security, a global private security services provider. The library director, Timothy Kambitsch, refused to listen to my side and refused my simple initial request to make a public apology and retrain his guards.

What happened next was entirely the fault of Mr. Kambitsch, his board and the legal advice of prosecutors working for County Prosecutor Mat Heck- as they embarked on a 2 year plus attempt to not handover the security video of the event. Video that once they had reviewed, had proven I’d done nothing wrong. They’d admitted that much in a settlement discussion where they refused to do anything to resolve their mistake.

By the time the final push came to get the library to produce all the video, as initially requested by my lawyer, Dan Durocher, he had to stop representing me because of his job change. When you work for one of the big firms in Dayton, you can no longer represent the little guys- because every government office or their favored friends create “conflicts.” Didn’t matter- I pushed, representing myself in court, and caught Kambitsch and the county prosecutors lying in court. Result, I won, the library finally turned over all the video, albeit half-assed, and paid $1000 fine (the max allowable) for their delay. Judge Gerald Parker erred in not granting my attorney’s fees, forcing the burden of enforcement of the Sunshine Laws underground where the sun don’t shine. 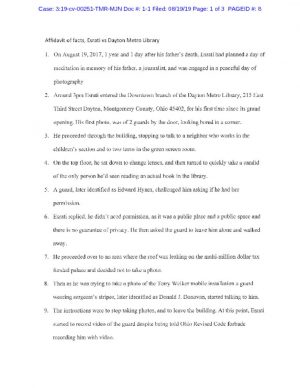 I’d also filed a civil rights action under section 1983 on my own in Federal Court. See attached filing.

Usually, attorneys take these cases on contingency, or based on their ability to collect a settlement, and taking a percentage. While my attorney said he would if he could, there weren’t any other takers.

What happens next is insurance companies step in. The library has an insurance policy and they hired Freund Freeze and Arnold to do their defense. G4S has an insurance company- and they hired a firm out of Columbus. I found it almost funny, that the library’s choice in lawyers was to go with the same firm that had settled with me long ago in another civil rights lawsuit about my right to wear a mask in a city commission meeting. Apparently, they lend reading material in the library, but they don’t read much. In that case, the settlement was $100,000 (most of it going to 4 different lawyers who represented me).

In the first settlement discussion I had with the library’s insurance company lawyer, the county prosecutor’s representative, my lawyer and the library director I asked for four things:

I thought that being a library, giving them a chance to encourage and enhance reading by children wouldn’t be an obstacle, and would give them a way to save face. 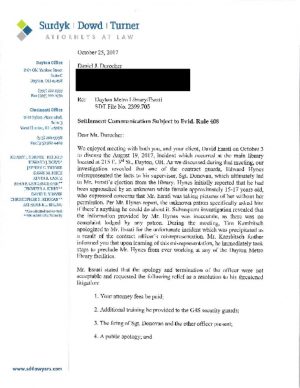 I was wrong on all counts. They refused all. Their board cut me off when I tried to tell them the error of their ways. The courts, under two judges, (Erik Blaine and then Gerald Parker) delayed the outcome long enough that the following things had transpired:

The library changed guard companies, and the County, along with Children’s Medical Center (with some “support” from Dayton Metro Library) launched the Dolly Parton Imagination Library on their own.

And, because of their many missteps, video that proves I did nothing wrong, legal precedent protecting photographers in public, and the high cost of litigating federal lawsuits, we reached a settlement. The insurance companies, that had already spent thousands of dollars paying lawyers just to get to the initial scheduling deadline, decided it was worth $35K plus my existing legal fees for this to go away, considering a jury could decide to punish the library for considerably more after 2 more years of litigation expense.

However, instead of funding the now up-and-running imagination library, the money went to support my 501(c)(4) charity- “Reconstructing Dayton” which exists to bring a semblance of rational thought to the way Montgomery County is organized politically. Our goal is to cut out redundancy, overhead, layers of unnecessary bureaucracy, tax burdens, and un-regulated tax based organizations like Metroparks, Social Services and the Dayton Metro Library.

With this funding, hopefully we can eliminate many of the banana republic micro governments in the county, institute county wide simplified lower taxes, make sure that there aren’t any unregulated tax based entities and most of all, make sure there is a publicly elected official to serve as a chief ethics officer to fight city hall or the Dayton Metro Library, when they refuse to follow the Sunshine laws- or the first amendment. 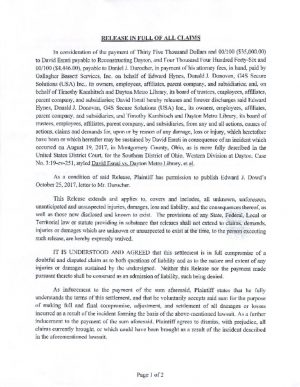 When library directors, or even the Animal Warden, do something stupid, there should be a way to remove them from their job. This case, should serve as a case study for why we need smarter people in charge in the county. Or at least someone who runs a library that knows how to read the constitution, and maybe review history so he wouldn’t be doomed to repeat it.

If his guards had picked anyone other than one of the few people to have filed a civil rights lawsuit in Dayton and won, he might have been able to sweep it under the carpet. But, unfortunately, stupidity is rewarded in Dayton Ohio. Reconstructing Dayton, thanks Mr. Kambitsch for starting the beginning of the campaign for his future demise.

Because all things in Dayton have only 1.2 degrees of separation, it should be pointed out (for the FBI, who needs a seeing eye dog to find dog poop) Mr. Kambitsch was on the School Closing Task force that violated the Open Meetings Act. His board-president, is the wife of another member of that “Task force” and this is just another example of the “Monarchy of Montgomery County” thinking they can steal from the public because of our lack of a fourth estate. If the FBI looks into demolition contracts and construction contracts used in the $170M library renewal program, they will find the same “pay to play” people who are connected to the “Culture of Corruption” that they talk about, but refuse to shut down.

And to the former guards, who’ve been having fun on a certain FB page calling me all kinds of names. Just remember, $35K says you are idiots.

I am fascinated by your David v Goliath story and am trying to follow the legal ins and outs you wrote about. I’m still confused. You posted documents and you have previously posted on this story. But maybe I am completely misreading your post, but I don’t see the final document that says the Library has settled with you for $39K. What am I missing?

Welcome Kim- in normal journalism, many times, the documents are cited, or quoted or interpreted and not presented. I understand that there are a large contingent of morons now, who believe in something called “Fake news.” So, because 1) you asked, and 2) many lawyers are wondering why I posted a settlement discussion letter, which normally can’t be published or brought up in court, I’m including the notarized settlement doc. See the updated post.

Thank you for the update. This is all very interesting.

[…] Update 2020. In the end, the library lost every step of the way in their fight to not turn over the surveillance video. Esrati filed a civil suit in Federal Court on his own, and ended up settling with G4S for a sizeable sum plus legal costs. Read about it here: https://esrati.com/39446-says-you-can-take-photos-in-a-library-or-in-public/17816 […]

[…] Dayton Metro Library throws me out of the new main library illegally for taking photos. They refuse to supply security camera video in a timely manner. Judge Gerald Parker punks me by not awarding legal costs. I file in Federal Court and settle for $40K $39,446 says you can take photos in a library or in public […]