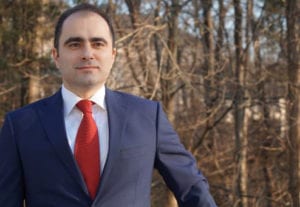 So you found out I got a questionable quarter million dollars? Vote for me! Dr. Adil Baguirov

We outlined the crazy dealings and shell companies of Dayton School Board member Dr. Adil Baguirov back on Aug 5, 2017. Our main complaint, which every official organization refused to investigate, was that Dr. B didn’t reside in the district, and should be removed from the School Board.

In that research, we uncovered a cornucopia of shell companies, many unreported, some of which he quickly shut down, to stop questions about possible improprieties and conflicts of interest.

Two things stood out: For a guy who has endless time to draw out public meetings, and all the answers on the dealings of the district, he has no debt, and seems to be rolling in cash.

And, that his pedigree was many pay grades above his current position.

We deduced he was his DPS seat as a stepping stone to higher office (he “won” his seat in an uncontested election) and is now starting that bid for the State Rep seat coming up next year.

Within three hours of publishing the piece at midnight, I got a warning via Facebook messenger from a friend:

You must have him investigated. He seems to be a total fraud. I cannot imagine no one checked where he lived…

This is juicy story. Be careful, they will come behind you with big guns.

We published the names of all his shell companies in that initial post. As with most investigative pieces, some parts come into focus later.

An Armenian journalist Emil Sanamyan, reached out to me two nights ago, with the missing link. There has been an international scheme uncovered by The Guardian and the the Danish newspaper Berlingske where large sums of money have been moved around to buy influence or lobby for Azerbaijan and Turkey. The investigation is calling it the Azerbaijani Laundromat:

Leaked data shows that the Azerbaijani leadership, accused of serial human rights abuses, systemic corruption and rigging elections, made more than 16,000 covert payments from 2012 to 2014.

Some of this money went to politicians and journalists, as part of an international lobbying operation to deflect criticism of Azerbaijan’s president, Ilham Aliyev, and to promote a positive image of his oil-rich country. There is no suggestion that all the recipients were aware of the original source of the money. It arrived via a disguised route….

The scheme has been nicknamed the Azerbaijani Laundromat. Confidential banking records were leaked to the Danish newspaper Berlingske and shared with the Organized Crime and Corruption Reporting Project (OCCRP), the Guardian, and other media partners. The data covers a 30-month period. It may show the tip of an iceberg.

In the list of all the companies that received this “dirty” money- we find a connection to our minor league politician, Dr. Adil Baguirov- who has a “consulting company” Turbillion– which received: $253,150 USD from HILUX SERVICES LP of Great Britain for 1311125026365614 PAYMENT TO THE CONTRACT N 121 DD.01.11. 2013, exactly four days after Dr. B was elected as the first Azerbaijani to an American office.

Most of the funding came through the British company Hilux Services LLP and its account in an Estonian bank from Baktelekom MMC, a limited liability corporation in Azerbaijan. A reporter for OCCRP discovered that the Azerbaijani company is owned by a businessman with ties to that country’s first family. The payments, prosecutors allege, were made in exchange for Volonte’s efforts to mute the European body’s criticism of Azerbaijan’s human rights record.

So, we’ve got a human rights apologist winning election to the Dayton School board? So what? And who cares if he got a quarter-million for being a mouthpiece for some foreign government? According to fellow school board member Sheila Taylor “he’s done more for this board than anyone.”

I can’t verify anything the Armenian journalist writes about Adil’s lineage, other than his wife is most definitely the daughter of  Turkish Ambassador to the United States from 1979-1989. Mr. Sanamyan has no problem stating publicly that there is more to Dr. Baguirovs lineage:

So, he might become the 1st Azeri, 1st cousin of a foreign ambassador & 1st offspring of Soviet KGB /NKVD officer to get into a state office pic.twitter.com/iQETnjZTiC

Of course the KGB and the NKVD don’t publish their membership lists, so I’m deferring to the journalist that speaks Russian.

The fact that Baguirov worked for lobbyists and Federally elected officials, and received foreign money is kinda one of those things that would usually get you into trouble in this country, but, all bets are off since President Trump took office.

Baguirov went to the Trump inauguration, and of course, there is a Trump/Turkish investigation going on,

The German bank that loaned $300m (£260m) to Donald Trump played a prominent role in a money laundering scandal run by Russian criminals with ties to the Kremlin, the Guardian can reveal.

If you want to read more than you ever wanted to know about how money flows to foreign terrorists and questionable deals that look more like payola, look at the New Yorker article “Donald Trump’s worst deal” and realize this was being structured while Dr. B was building his political lobbying chops in D.C. And that the same people fingered in the “Laundromat” which sent his consulting company money, were the people who were financing the Trump deal in Baku; all connected to “Ziya Mammadov, the Transportation Minister and one of the country’s wealthiest and most powerful oligarchs. According to the Transparency International Corruption Perceptions Index, Azerbaijan is among the most corrupt nations in the world.”

Surely, there will be an investigation of Dr. Adil Baguirov now…

Ah, hell no, this is Dayton, where we only prosecute drug dealers and sex offenders and cops shoot photo journalists by “accident.”

What we do know is that Dr. B is gearing up for his next election:

and the start of his run for OH-40- funded by CrowdPac.

And, one other thing, in light of his four different sites, is his Website development being handled by the Internet Research Agency?

Now will someone look into this?

He does resemble Putin…maybe a cousin?

Nothing new with WPAFB in town as there seems to be an inordinate amount of “successful” first generation “Americans” to get there “start” in influencing politics from this area.

Raj (India), Sherry (Egypt) have interesting histories…. as well a few others…..I bought a car a long time ago from a gentlemen who was married to daughter of a former Luftwaffe Pilot, brought to town by the US Military. ….

Of course Americans do not care as long as the beneficiary is not an African American.

You might want to start sleeping with a gun under your pillow.

Why (3) different websites vs having the .org and .net sites re-direct to one or the other ? Oddly, it looks like the .com address was taken ! For the blog site, strange to have a separate site too.

Do not vote for Adil Baguirov for County Recorder – Esrati

[…] There are a lot of things that should have, could have been looked into by our prosecutors office, the Ohio Ethics Commission, the Ohio Attorney General, the Ohio Secretary of State- but, all of them, ignored it, because, frankly, we have the best government money can buy, and he has plenty of access to cash. Read about how a quarter million arrived in his bank account, right after he “won” in his unopposed race for School board- where he came in dead last: Dayton’s International Man of Mystery, Adil Baguirov, has ties to Russian “Laundromat” […]

[…] International Man of Mystery: Adil Baguirov which introduces the problem. Then, you can read how he illegally got $250,000 from overseas- days after getting “elected” (he was unopposed) and how I finally got him to resign with less than 7 weeks left in his term: […]