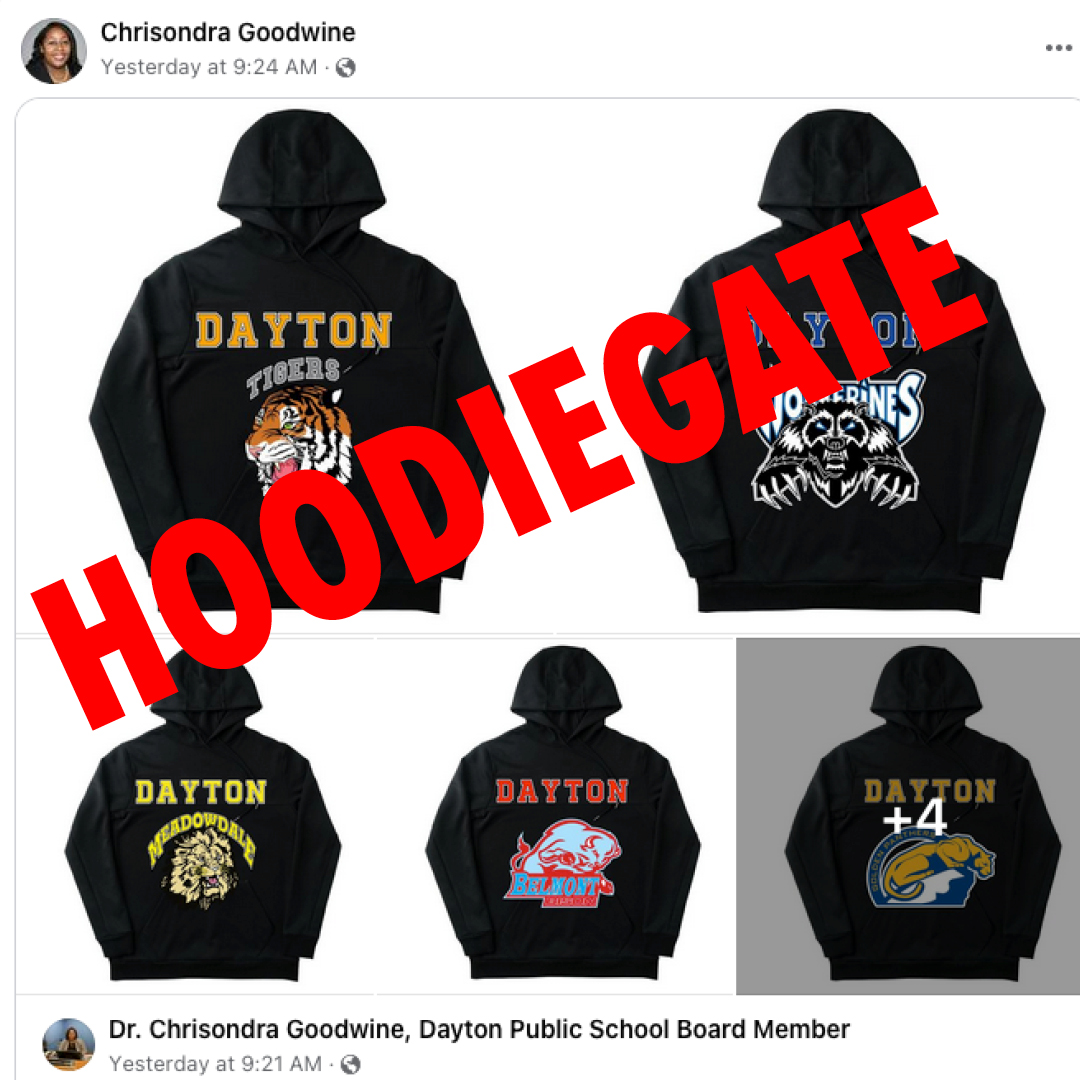 It’s time to fire Dr. Libbie Lolli, the School Treasurer Hiwot Abraha, new Business Manager Dr. David Lawrence, and charge Dayton Public School board members, Will Smith, Dr. Chrisondra Goodwine, Karen Wick-Gagnet, and Dion Sampson with crimes in office. The crime: looking the other way when a $68,000 expense was not only authorized without board approval, but apparently without an RFP, bids and an evaluation.

What did they buy? Hoodies, for every single high school student, with their school name on them. Yep, the taxpayers are now dressing high school students (who cares about grades K-8- the little ones can freeze) with branded hoodies.

Did I mention, the DPS code of conduct prohibits hoodies to be worn in schools? Oh, that’s right.

You can watch as board members Joe Lacey and Jocelyn Rhynard question and ultimately vote no. Board member Gabriella Pickett was out.

The board members ACKNOWLEDGE this process began in October. They ACKNOWLEDGE it wasn’t on board docs earlier. They won’t say who actually requested these, although it may have come out of the Athletics committee (Smith, Wick and Goodwine) but that’s unclear. At some point, someone had to get size and quantity of all high school students- and place an order. That would fall under the new “Business manager” Dr. Lawrence who sits deaf and mute on this discussion.

There is no discussion about precedent. Does this mean every year, every 9th grader will get a hoodie from now until eternity? Nor, does this cover the change in the dress code so they can actually wear them to school.

At most districts, if this was a directive of the board, the Superintendent would put the process out to bid, try to engage the community and possibly sell sponsorship of the hoodies to business- perhaps with a company logo on the hoodie- or ads on scoreboards or even in the building- or ask philanthropists to donate to pay for this.

Since none of that happened, the cost of this should be taken out of the paychecks of the administrators, as well as criminal charges being pressed. I’ve filed a Public Records Request with the Schools (this used to be easy- send to the in-house counsel, now the district spends north of $1M a year on contracted legal representation).

When I get the documentation, I’ll post- and will refer this to County Prosecutor Mat Heck, and to the Attorney General, although just by watching this video- it is clear a crime has been committed and done so knowingly.

Open honest government starts when the public keeps an eye on public meetings and calls BULLSHIT when the law is broken. This is a case that’s perfect for a Sunshine law lawsuite- but the plaintiff has to fund it all- and hope that local judges will actually pay the legal costs (apparently- it’s discretionary, since “Judge” Gerald Parker said I won in the library case- but refused to reimburse my legal fees as suggested by Ohio Law. Parker should be challenged next time he’s up).

The kids of Dayton probably would like the hoodies- however, they might also like band instruments, or even the right to take home their chromebooks… which they can actually use for learning. But, we don’t trust them with those- only hoodies- that they can’t wear to school.

Totally agree David. All politics is local. This is fraud !

But I thought DPS was struggling financially because of some parents using Ed Choice vouchers to send kids to private schools? Guess not if they have at least $68K lying around for frivolous stuff like this.

Follow the money. One of these people has a relative with a screen printing side hustle.

Note- the same person has been posting with a different name each time- that’s against the site policy. All names have been changed to match their first post. You can be anyone you want on this site- you just only get to have one name.

I suspect David would have been all for the hoodies, if it were his company selected for the design. David has made it clear that if you offer him some money, his “activism” will cease to exist. He made that clear when Sandy Mendelson offered him money to stop his activism of a land purchase deal. Guess what David did? Spoiler alert – he took the cash and ran.

The Dayton week old news got the story yesterday- 28 Dec 22. 4pm.
https://www.daytondailynews.com/local/hoodies-for-students-spending-policy-issue-lead-to-dayton-schools-tension/WMYM3LLK7ZAHFNCIPJSCKKKU44/
No credit given for who broke the story.
And to Mr. John Johnson- here’s the story on me with Mr. Mendelson. https://esrati.com/remembering-sandy-mendelson/18562
And who are you? $8.7M of your tax dollars went out the window…. were you one of the “investors” with Mendelson?

No, I wasn’t an investor and I didn’t receive profit from the deal, unlike you. Why would I be holding you accountable for being a coward and walking away from your activism for a sweet, sweet paycheck to shut your mouth? You profited from the land sale along with others you mentioned. You are no different then the people you complain about. The people you don’t complain about are still paying you. If DPS were paying you for the Hoodies – guess which post would have never been posted? This one. If Mendelson’s was still paying you – guess which post you would have never made? The link you provided.

Sorry David, you won’t win this one and I won’t let it go. All you care about is money in your pocket and nothing else. It makes me wonder who else you have profited from? Maybe as an ‘advocate’ for a certain person in the VA? What have you taken from him?

@John Johnson. Let’s be clear- the work I did for Mendelson won awards and made him money. There were no public funds involved, it was a private business transaction. That he made money from the taxpayers- wasn’t anything I could stop- just delay- at great cost to me.
As to your cheap shot about my role as POA, Fiduciary, and as caregiver to a 100% disabled veteran- “It makes me wonder who else you have profited from? Maybe as an ‘advocate’ for a certain person in the VA? What have you taken from him?”
I’m audited by the VA, by Social Security, and I’m in constant contact with his medical providers. If you have a problem- talk to them. When he read your comment- his response wasn’t fit for publication, but, needless to say, both he, and his incarcerated brother who I took over POA this summer for, thank me often for the work I do on their behalf.
His son and step son, who we have dinner with weekly, both will tell you that his life with me in it- is immeasurably better. And, his former co-workers, employers and his friends who’ve met me, and know his story- all think I’ve done an amazing job.
Now- what the F have you done for anyone?