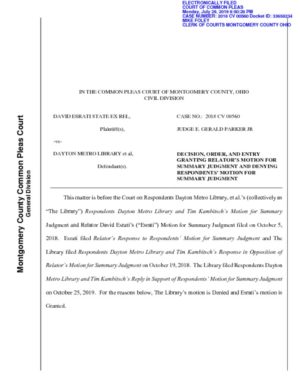 After almost 4 months of delays caused by the library supplying faulty video to Judge Gerald Parker, and pressure from me to find them in contempt, the judge was finally supplied watchable video and ruled against the libraries argument that the internal security video wasn’t public record.

The Court has reviewed the surveillance video at issue and finds that the surveillance footage does not meet the criteria necessary to be excluded from public records disclosure as a security record.
Because the definition under R.C. 149.433(A)(3)(a) exempts “[a]ny record that contains information directly used for protecting or maintaining the security of a public office against attack, interference, or sabotage” (emphasis added), there must be evidence of the specific uses the government agency makes of the record for security purposes in order for a record to be classified as a “security record.”…

This case balances two important societal needs: the need to protect the public’s right to privately use the public library and the public’s need for access to information held by governmental
bodies. While Esrati is the Relator here, he is representing a larger interest than his own. Likewise, The Library is representing the privacy interests of its patrons.

The judge then orders the library to supply copies of the multiple videos with the faces blurred of patrons to protect their faces. There was no way to tell what people were reading, or what materials they were checking out. The library will spend considerable money in redacting the video, more than the $1000 award that Parker assigned to me.  For some strange reason, Parker did not fully come down on the side of David in this case against Goliath, by not awarding attorneys fees. Considering the plaintiff in this case bore the costs of the defense against him via his taxes, it’s hardly going to lead to other people defending their rights if this travesty is allowed to stand.

This was just the first step in the case- getting the video released, so that I could file a Federal case for violations of my civil rights, where all of my attorney fees will be covered.

I’m going to make another attempt to settle this case with the Library, but I have a feeling the directors arrogance will get in the way of common sense.

Considering I already have the library admitting that they were in the wrong in ejecting me, how they can want to continue this case is unreal.

“The unfortunate removal of Mr. Esrati from the library was precipitated by the improper actions of the security guard that was under contract with the library. By Falsifying the circumstance which ultimately resulted in Mr. Esrati’s ejection, the guard was not acting pursuant to library policy.”

As to Judge Parker, when you rule for the plaintiff- and yet stick them with their legal bills, you have no respect for the Sunshine Laws which depend on citizens taking risks to make sure those in power follow the law. Your decision on the legal fees will be appealed.

This is just one more example of my willingness to fight for the public and their rights every time.

Foucault pointed out that the exercise of power is used by the government including sovereign power and disciplinary power. The library system in Dayton regularly exercises disciplinary power and surveillance to control, gain dominion, as well as monitor its patrons, including but not limited to peoples of color.

hahahahaha….good for you, Esrati! keep up the fight.