When the board brought in the rookie superintendent, Ronda Corr, she promptly hired in two high level administrators of her own, both with superintendents licenses and credibility far exceeding her own.

I’ve been incredibly impressed at all times with Dr. Elizabeth Lolli, and have even suggested her as a replacement for Corr. 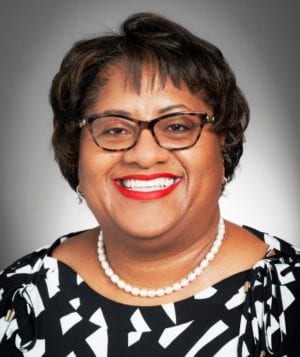 The other, Dr. Markay Winston, the “Chief Academic Officer” hasn’t been very vocal at board meetings. My first exposure to her was in the interviews of the botched marketing RFP process, where she didn’t ask my team anything.  Her one public presentation that I remember was her introduction of the virtual academy introduction, and it sure could have used some help from a marketing professional. She also managed to get embroiled in the Dunbar thrown game mess– and presented the new plan for athletics.

Winston was a follower of the educational reformer, Michael Fullan, who strongly believes in the power of principals. Maybe, that’s why her Confidential resignation letter today, was addressed to “Dear DPS Principals” – her resignation takes effect July 12, 2017, which is two days after the July 10 cutoff date for teacher resignations. Winston was generally well liked and respected by staff, with some mentioning that she was the only one who visited their buildings.

Where things seem to have headed south was when she was the top official on site when the Dunbar football fiasco happened. The old org chart would have had David Lawrence to blame, but since Rhonda Corr had already banished Lawrence to a corner by the mail room, there had to be someone on the short end of the stick- and since Corr protected athletic director LaMark Baker with a 2 year contract before all the facts were on the table, Winston ends up with a 2 year liability to carry. The principals asked Winston to go to bat for their AD/coaches- well aware that positions would be hard to fill, and Winston was unable to get Corr to budge on her edict that there would be no dual positions.

Some principals thought highly enough of Winston to take her out to lunch, urging her to stay about a month and a half ago, and they were assured she would if support in central office turned in her favor, but her general feelings were that power was consolidating around the more senior Lolli, and her role was being diminished. Throw in the failure of the Ohlmann Group to help with her virtual academy project, word travels fast in higher ed, and headhunters started reaching out to her. A few people also believe race to be an issue. In the fall RIF, an inordinate number of African American staff was shown the door, followed by David Lawrence.

It’s not hard to find a better offer than Dayton Public, everyone who works there knows that. Many are leaving.

The timing is right as well. Right now, the district can still brag about their one A in annual yearly progress (AYP) which was achieved pre- Corr/Lolli/Winston. Predictions by some are that scores will drop this year. One of the programs they bought and used heavily for K-2 was actually for intervention, not instruction. The entire forcing of the computer based learning was more of a thrusting instead of an introduction. DPS will be far in the rear-view mirror for Winston if scores go down, and if they go up- she looks better.

There is no doubt that Winston cared deeply about student achievement, in her eloquent resignation letter she made the following statements:

“you know that change is hard and it does not come overnight or simply from wishful thinking. True change comes from a clear theory of action, coherence in vision and direction, and clarity and consistency in executing the most essential levers for improving student outcomes.”

This district is facing a possible teachers strike in the fall. It can’t get students to the buildings. Staffing has been improving, but many senior teachers with years of experience are leaving the district now. New teachers have had to come to the School Board and beg not to get moved around like chess pieces in the hands of a baby. The confusion about financial stability has been in flux from the RIF in the fall to the massive bus purchase in the spring. The coaching/athletic director situation for next year has DPS parents in flux, wondering who is going to coach their kids (no other district leaves their coaching hires for fall sports to the fall). The upcoming school board race has more candidates than a horse race (15 and counting for 4 seats). The board seems to be in fantasy land, with Corr sitting at meetings like a dazed bystander to a driveby shooting as board members go off on tangents about things not even on the agenda (Tuesday, Board member Sheila Taylor ranted about the suitability of Miami University to do contracted research, when the whole issue was already off the table. I actually interrupted her after 20 minutes of mindless blather- and she called for my removal. No one was willing to back her up, because under their breath, they were thanking me for putting the meeting back on track).

Morale and confidence of many long term educators still in the district is shaken and at an all time low. How much longer will this board refuse to see the writing on the wall? Rhonda Corr wasn’t the answer to this districts problems, and now even, one of her hand-picked executive leaders has made a statement by abandoning the sinking ship.

This is terribly unfortunate. As you stated, David, Dr. Winston was well liked and had a genuine zeal for placing students first. Every interaction that I had with Dr. Winston was a positive one, and she will be sorely missed. The three board members, however, will not be missed at all. I wish you (David) would reconsider your position on running for the board. Yes, it is a pedantic position, however the district is in need of strong leadership from the board.

DPS as the wheels fall off – Esrati

[…] we reported last Thursday. Dr. Markay Winston, the handpicked Chief Academic Officer’s resignatio… is on the agenda. How can a board have faith in a superintendent who can’t keep her own […]

Good riddance to Markay. While in Chicago she refused to answer questions under oath and in Cincinnati she did everything possible to see that children with disabilities DID NOT get an education. Keep her away from children

And they are leaving in droves. DPS loses 36 teachers on resignation day – Esrati

[…] adjustments had to be made- including $16,484.90 to Dr. Winston who quit and you read it first here. The money will come in handy, to pay her lawyer for the lawsuit that is probably coming against […]

[…] well before the final hour. Blaming Bradshaw is nothing but a hit and run. If you are wondering why Dr. Markay Winston, Corr’s handpicked senior leadership left– it was because she was tired of getting hit by Corr’s […]