A refresher on Dutch folk tales:

“The Emperor’s New Clothes” (Danish: Kejserens nye Klæder) is a short tale written by Danish author Hans Christian Andersen, about two weavers who promise an emperor a new suit of clothes that they say is invisible to those who are unfit for their positions, stupid, or incompetent. When the emperor parades before his subjects in his new clothes, no one dares to say that they do not see any suit of clothes on him for fear that they will be seen as “unfit for their positions, stupid, or incompetent”. Finally, a child cries out, “But he isn’t wearing anything at all!” The tale has been translated into over 100 languages.[1]

update: 18 Oct- key part missing from this synopsis- the Emperor also knew the suit was invisible- but, chose to believe the weavers too. (end update)

We know that Dayton Public Schools has problems managing their public image. Now, the people that Rhonda Corr hired to manage it, are actually actively destroying credibility and possibly breaking laws. 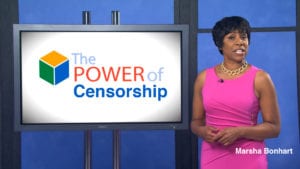 Unfortunately, the director of Dayton Public Schools media and public relations , Marsha Bonhart, either thinks she’s doing someone a favor (providing grounds for her dismissal) or is woefully ignorant of the audacity of the email she sent out to candidates before tomorrow’s Dayton Educational Council candidates forum from 6:00 – 8:00 p.m., at Ponitz Career Technology Center, 741 W. Washington Street. (The  event will be broadcast live on DPS TV Spectrum Channel 21. and hopefully livestreamed as well).

The email, suggests that free speech should be limited, political discourse restrained, and that no one should disparage her boss, Rhonda Corr, whose future tenure will be decided by the very people that Ms. Bonhart seeks to censor and reign in.

Dear candidates, as an addendum to Friday’s email:

Thank you and we look forward to you providing voters the information they need to make informed decisions.

Since Ms. Bonhart works for an organization that receives a lot of federal funds, we might look over to the Hatch Act of 1939 about what is allowed and appropriate for public employees to engage in during a political campaign. Note both the first and second bullets:

These federal and D.C. employees may not:

The fact that the meeting is being held in a public building, on public property, for a public purpose, specifically, to discuss issues and the candidates who have the ability to vote to hire or dismiss Ms. Bonhart, shows she’s sticking her nose where it doesn’t belong.

A true public relations professional in an organization that serves the public should know better than to get involved in this process, and know that her communications are all public record and not private.

Considering we’ve already had members of “The Slate” publicly state that they might try to skirt sunshine laws:

A member of the slate of candidates, which was endorsed by Dayton Mayor Nan Whaley, (Mohamed) Al-Hamdani said the four would not show disagreement in public, doing more preparation behind closed doors. He did not address how that would fit with open meetings law.

Source: Election will change face of Dayton’s school board

We may have even bigger problems in store when it comes to what is acceptable political behavior and what is not if Ms. Bonhart is the new ruler of political dicourse.

I believe that Ms. Bonhart should either retract these rules and publicly apologize for her attempt to influence political speech and interfere with an election via her official capacity, or be dismissed for cause. I don’t expect our current board, superintendent, elections officials, the county prosecutor, the state school board, the Ohio Ethics Commission or the Secretary of State to do their jobs and censure this kind of blatant abuse of power, but, that’s why we have a free and independent press, to make sure you know when you are getting played.

When a public employee thinks they can regulate candidates speech, we have a real problem.

This needs resolution before this event begins tomorrow night.

Candidates’ Night, Wednesday, October 18th,  is drawing closer. As you know, the program, sponsored by the Dayton Education Council, will be aired live on DPS-TV from 6 to 8 pm with a strong presence on social media. We expect a large live audience as well.

You will be introduced and given 2 minutes to give an opening statement. When addressed by the moderator, each candidate will have 2 minutes to answer 3 rounds of pre-selected questions in addition to questions from the audience, phone callers and social media.

Again, thank you for your interest in becoming a member of the Dayton Board of Education.

Of note- the Slate don’t even get email directly- it goes through their handler, Uriah Anderson of Burges & Burges from Cleveland.

This was posted on the DPS Facebook feed- no author attributed, but, it also reeks of a complete incoherence of policy.
https://www.facebook.com/daytonpublicschools/posts/1923781057637031

Recent and consistent protests by members of the National Football League, coaches and team owners have sparked controversy and divisiveness among Americans. Initially, the athletes were asserting their disapproval of what they consider unnecessary use of force by police against African Americans by “taking a knee” or sitting, instead of standing during the national anthem at the opening of football games. The players say last weekend’s actions are warranted because of President Trump’s exclamation that team owners should fire any player who does not stand at attention for the anthem or flag. The president’s use of vulgarity in reference to those players has since rippled through the world of professional sports and its messaging has trickled down to school districts. Because professional athletes have a major impact on their younger counterparts, the Dayton Public School District is issuing this statement to students, their families, staff and the public:

Public school employees have the right to free speech, but the first amendment does not protect employees’ free speech that impedes or interferes with the orderly educational process. That same right is not protected if it encourages students to be disobedient or misbehave.

It is suggested that Dayton Public School students/athletes confer with their families about this issue.

The Hatch Act is federal and doesn’t apply here. Why mention it?

Hi RB- Welcome.
Why mention the Hatch Act- because, DPS gets an awful lot of Federal funding.
Also, because it’s well known- and there are some corresponding local and state laws.
I’m guessing there is even a board policy against it- but, I didn’t have time to ceck that as well.
The point is- it was a bad move by someone who is supposed to help guide the district in improving their public image.

Found this quote from Theodore Roosevelt- from 1918 newspaper editorial he wrote:
“To announce that there must be no criticism of the president or that we are to stand by a president, right or wrong, is not only unpatriotic and servile, but is morally treasonable to the American public.”