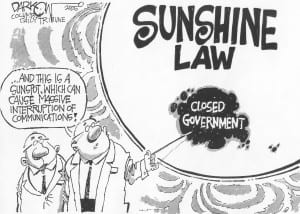 I had planned to write a post to define the Sunshine laws, how “work sessions” are supposed to work, and what a “business meeting” is.

I was also going to cover how most elected bodies manage going into executive session, what they are allowed to talk about behind closed doors, and what it means if there is a board that spends a LOT of time in executive session- but then, I said, maybe I should look back on the 2500+ posts on this blog… surely- I’ve covered it before? And, the answer is: of course I have- over and over. Even about DPS. Even with arguments in comments with Dr. Adil Baguirov, Joe Lacey, etc.

I could just send you to all the posts- and you know what, since I’m feeling stuffed and lazy this Thanksgiving, I’m going to do that. But, there are a few things I need to point out before I do that.

Most boards go into executive session at the END of their regular meeting. This is so guests who are invited to speak, don’t have to sit around and wait for them to finish in the back room. It’s also usually done this way, so people WON’T know how long they are in executive session.

Why is the length of executive session meaningful? Typically, the limited issues that are allowed to be discussed in executive session are ones in which a board/commission/etc. is reviewing the findings and options that are presented by those they supervise- for DPS that means the Superintendent and the Treasurer. They should be getting well prepared documents in advance, with cost benefit analysis, organizational charts, performance reports, contracts, bids, etc. By the time they arrive, they should have their questions ready, and should know the material inside out. Then it comes down to are there 4 votes to support the action? This really shouldn’t take long if the organizational leadership has provided cogent, succinct, relevant briefing material. So, when you have long sessions behind closed doors- it means you are questioning your leadership. Not a good sign.

Competent leadership guides the board in the direction they are taking the organization. Weak leadership relies on the board to guide them in doing their job.

Based on the amount of time the Dayton Board of Education is spending behind closed doors- our new superintendent must be floundering in their eyes. Have they recognized yet that they made a huge mistake in hiring Rhonda Corr? Is that why there have been long executive sessions- ones that she’s not in? That most likely means they are discussing her future here.

Executive sessions are usually not needed for things that need immediate action if an organization isn’t flying by the seat of their pants. Announcing a list of layoffs, then going into executive session, then voting on it- in a “work session” instead of a “business meeting” has so many flaws in it, there is the potential for 20 separate or one-class action lawsuit for managing it incorrectly. The former board Treasurer is already suing them for his illegal firing. Items like this, should be discussed in executive session- and decided on, then posted on the next business meetings agenda- with good notice, and then acted on. At least in theory – that’s how it’s supposed to go.

But, this post is already longer than it needs to be.

You could have just read this post: What is a legal meeting of the Dayton City Commission? Yes- it’s about the city commission, but it spells out the differences between public meetings and work sessions- which the board of ed calls different things- review sessions, strategic planning discussion, various committees etc. It’s why Dayton Daily news education reporter says that this board meets more, longer than any other school board in the region. Hmmm, maybe that’s why the district is failing?

Or this post: Dayton Board of Ed votes 4-3 to donate taxes to GE/UD
This one doesn’t really get into the nitty gritty of the sunshine laws, but is interesting because Joe Lacey denies screaming and gets involved in the comments. The reality is- the board didn’t really want citizen input- and gave away a big tax break to General Electric. The fact that the vote was 4-3 shows there was a little common sense on the board at the time with current board members Lacey, Taylor and Lee all voting yes. None of the no votes are still on the board. There are 87 comments on this post- a lot of insight for those who want to learn more.

And, saving the best and most relevant for last, including comments by Dr. Baguirov and Joe Lacey, is the one about how the meeting was handled when the Board was in the process of subverting former Superintendent Lori Ward as she was about to attend a forum with local groups. Time for some sunshine in DPS meetings The labeling of the local New Black Panther Party and the Nation of Islam as hate groups was just one more indication of the racist overtures of the current board president. Again, comments are illuminating with contributions from Baguirov and Lacey.

One last observation, strong black males, outspoken competent leadership, seem to have been high on the list for the recent cuts that were made with bad enrollment and financial data. Something else to think about.

If you go back to my speech at the October board meeting, I said the number one thing that is required for building the school brand back is trust. The “Sunshine Laws” are key to building trust through transparency. The board needs to make a few key changes immediately if they want to restore trust after this latest round of fiascos:

See you at the Tuesday December 6 2016 meeting, at 5pm where we will learn if John McManus becomes president, if the rest of the cuts using bad data are acted upon, if Rhonda Corr will keep her job.

The meeting the citizens are organizing to plan for this meeting is:

“Parents of DPS students are invited to join a conversation about proposed changes to the yearly budget and personnel in our classrooms.
Please join us to ask questions, provide feedback, and share our vision for the future of our children and community. School board members have been invited to attend to answer questions and provide greater understanding for their plan for Dayton Public Schools.”