When a certain son of Oakwood was indicted for rape in California, the photo the news published wasn’t his mugshot. It was a long time before we actually saw the mug shot.

When a friend was arrested at work, for beating the shit out of an intruder in his home, the day after, there was an old mug shot up immediately, and a new one not much later. He was released on bond, only to come to court the next day to find charges were dropped.

Yet, when you shoot and kill two black teens in the back, and finally get locked up, the mugshot isn’t up.

Can someone explain please? 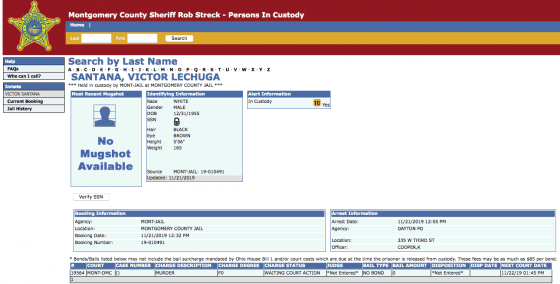 Santana is in the Montgomery County Jail following his arrest on a warrant. Santana faces four counts of murder, five counts of felonious assault and one count of attempt to commit murder.

Devin Henderson and Javier Harrison were shot in the back and died. Both were 17 and African American.

All this while the Republicans in the Ohio Statehouse are trying to pass “Stand your grounds” rules to further allow this kind of old West justice- by removing the standard duty to retreat before using lethal force.

Supposedly, it took our “Prosecutor” Mat Heck extra time to evaluate this case, because of Ohio’s “Castle Doctrine”- which is meant to protect a person within their home from intruders without justification. However, a garage is not a home, and it is only supposed to be used if you felt threatened. Henderson and Harrison were unarmed and in a garage.

My friend, however, was in his home. The person was trying to get into his home to assault my friends baby momma. And, yet, he was arrested less than 12 hours later.

Mr. Heck has some explaining to do. Unfortunately, there isn’t a lawyer in this city with balls enough to run against this fraud of a prosecutor so we keep getting stuck with Heck or high water.

So a guy with the last name “Santana” from New Mexico is “white?” Lol ok…