When I was arrested, I knew I didn’t want to look like the mugshots I’d seen before- Mick Jagger was firmly in my minds eye, I tried to smile and was told “no teeth” so I put on a shit eating grin and kept my lips together. My crime was of wearing a black balaclava in a Dayton City Commission meeting- sitting perfectly still, in protest of illegal secret meetings- including one discussing how to keep citizens from speaking at the meetings- or at least, shutting off the tv cameras when citizens come to speak up. It took 2.5 years to clear up. It cost a lot of money to lawyers. It cost the taxpayers. I had long ago agreed to not sue, if the city dropped charges- they didn’t.

Mine wasn’t criminal justice- mine was civil liberties at stake.

Yet, everyday, in the United States, our beloved “democratic” self-righteous county, screws up justice, just as it screws up democracy, with money, power and race as factors.

I present to you two Dayton boys gone bad. 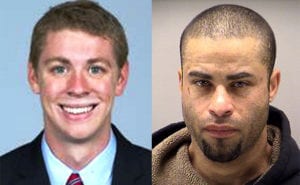 The one on the left is Brock Turner, white, wealthy, division 1 swimmer at Stanford. I can’t find his booking photo- just this picture, over and over. He was found by 2 Swedes riding bicycles, physically assaulting (the description by the victim makes this a lot more clear) an unconscious girl, while he was intoxicated. Had they not interrupted his actions, rape would have been the charge. A crime against a person.

The one on the right is the guy who I’ve served as a “big brother” to since he was 10. He’s now 39, and in custody of the local Sheriff. His charges- breaking and entering, carrying a concealed weapon, etc. are crimes against property.

The one on the left, didn’t have to sit in jail waiting for his court date, he was out on bond. The one on the right, arrested March 9th, 2016, is in jail. No one will bail him out. His family has given up on him, I’ve disowned him and divorced myself from his troubles. The house he was renting from friends, foreclosed. He’d stopped paying rent. He had a painting business- but, due to his untreated mental illness and experiments with Meth- he had lost his truck, his tools, his phone. His baby momma and three children (a fourth child with his first baby momma is also struggling to stay out of trouble at 17) had moved out in November. The house was being broken into- even after the bank boarded it up. There was evidence that he was probably still cooking meth inside- after the utilities had been cut off.  Any chance of him picking up the pieces of his life are over.

He’s heading back to prison. Third time. But, here is the difference between the privileged white boy and the poor black one, one has spent more time in jail, not prison (there is a difference) than the other one- and never for actually harming anyone physically.

I don’t know Brock Turner. I do know people who do. One female college professor I know whose kids are friends with him, almost excused him for his actions due to his own intoxication on Facebook. I wanted to throw up. Go read the victims’ statement linked to above.

I searched all over for his booking photo- and then realized why I didn’t see one, he was probably never booked into jail.

Eric has been booked into jail more times than I can count. But, I’ll just share one with you.

He’d gotten out of Nobel Correctional after serving a full three year sentence, and was living with me, and had a 3.95 GPA from the first year of an associate’s degree that he earned while there. His first day at Sinclair, he went to the campus police to report something he saw (he suffers from undiagnosed paranoia) and when the campus police looked him up, they saw a Dayton warrant from before he served his three years- and arrested him. He spent the night in jail on his first day trying to better himself back in the world.

But, let’s talk about why he went to jail for 3 years, other than being black in Greene County (it’s not on the books- but it seems to be a crime). He was involved in a minor fender bender while intoxicated. While waiting for the police, he thought it would be a good idea to go into the nearby bar and call me- asking me to come out and help him. When the cruiser arrived and he was mouthy with the cop- he was put in the back seat of the cruiser, in shackles- where he ran his mouth and said to the cop that he “wouldn’t live to see his next birthday” while the cruiser video cam recorded.

The judge said it was open and shut- threatening an officer of the court is a felony- punishable by a minimum of 3 years. Had Eric slugged the officer instead- it would have been a misdemeanor punishable by up to 6 months.

Brock Turner was violently molesting an unconscious girl. He’s sentenced to 6 months with the possibility of getting out in 3 months. He hasn’t spent a night in jail. When he gets out, he may have the stigma of being labeled a sex offender for life, but his life will go on. He’s still not admitted that what he did was wrong. Even in Eric’s most manic state, he still realizes what mistakes he’s made, even if he believes that there are people (including me) who are actively collaborating to screw his life up for something he did almost 20 years ago.

The sad thing is that prison won’t solve either of these problems.

Eric has needed professional mental health care since he lost his mother to cancer at 13 (probably a preventable death, but since she had outstanding bills to Greene Hall for her detox, she didn’t go to the gynecologist when the first clues of something wrong appeared).

Brock has obviously needed both lessons in what consent means, and what is acceptable sexual behavior- as well as treatment for alcohol abuse.

Three months or three years in prison won’t undo the damage he did to his victim. While the thought of Mr. lily white Oakwood getting raped in prison might make some people remotely satisfied that justice was somehow served, it isn’t a solution either. Two wrongs don’t make a right.

The money Brock Turners family spent bailing him out of hot water was probably exorbitant. My own legal bills ran over $75K for my case of 4 fourth degree misdemeanors.

Brock will grow a beard, change his hair style, start using his middle name, find some place to “hide out” and continue his life. Sure, he’ll have to register as a sex offender, but, some will overlook it, hire him, marry him, have his kids- just like Eric managed, but the difference is- no one will do the same for Eric.

This country is still racially and economically segregated and unjust.

We’re not about to address the issues of a proper health care system to help people who need it.

We’re not about to reform our justice system to make it equitable or to focus on rehabilitation.

Brock Turner should have to tithe for the rest of his life to either the victim or to rape prevention or alcohol education issues. He should be put in prison until he fully accepts responsibility for his violent actions. He should be banned from drinking or purchasing alcohol for life.

Eric  should be put in a highly supervised half way house, tested for drugs and alcohol for life, and allowed work privileges with his income being directed to pay child support. Putting him in prison won’t protect anyone, won’t solve the problem. He isn’t capable of managing a life that isn’t highly structured and monitored- but, that said, it doesn’t mean prison is the only solution.

In fact, I’ve yet to see prison actually do much to solve society’s problems except for the most dangerous psychopaths, serial killers and arsonists. It hasn’t done a thing to reel in the criminals of Wall Street, nor has it stopped the drug trade or the killing that goes along with it.

Need proof? Eric has been to prison twice, jail a bunch- and he’s still not able to operate on his own in society.

Need more proof- Brock Turner, despite being incredibly violent, is only going to go for 3 months.

It helps to be rich, white and to smile for your mugshot.

I stopped reading this, as the victim only knew what happened after the fact. It’s MFA story. Go read the witness statements collected during the investigation and then you can spout a story. Duke Lacrosse get a clue.

The difference in the privileges being afforded Brock are not lost on the online community, which is growing in outrage over the fact that Turner’s mugshot photo isn’t the first thing attached to articles about Brock’s sexual assault in the press.

I didn’t realize there was a controversy about it when I wrote this post- thanks for supporting my position David Lauri.

@bubba- I carry a swiss army knife everywhere I go. That’s a concealed weapon when they want to pile on the charges.

Ahead of the game yet again, Esrati. I am amazed at what an overlooked treasure you are to the MV community and overall world. You remind me of Roddy Piper in syfy flick “They Live” wherein he states: “I am here to chew gum and kick a$$ and I’m all outta gum.” Keep on doing what you are doing.

I just found out last night, that this family moved into my Sugarcreek neighborhood last year, after moving out of Oakwood. They live just a few streets away. I’m repulsed by this entire situation on so many different levels. The crime & criminal; the judge; the ONLY six months, probably 3; the friends & family of the criminal! The “Father’s” public statement, “20 minutes of action”, referencing”steak” as if the victim was nothing more than a piece of ass. My heart aches for the victim & her loved ones, her statement was eloquent & spot on! I don’t feel guilty thinking I don’t want this young man, getting out of jail & moving back home with his parents & being anywhere near my family friendly neighborhood. I don’t ever want to bump into him or his parents.

Hey dipshit, if you call yourself disowning Eric,  keep his g-d name out ur mouth, bitch

Do you kiss your mama with THAT mouth, Angela?

Sheesh!  Nothing like the internet to give people an opportunity to display their intelligence. LOL!