Dayton Public Schools were 607 when Dr. Elizabeth Lolli was handed the reins by a school board that had just fired their last trainwreck (Rhonda Corr). She looked like the best one available to them. Hint, you were 607 because the people you had in charge were all trainwrecks. Lolli was hired by the one you fired- Hello?

When you are 607, the first thing you think you’d do is immediately lay out a plan for change. Need to see how it’s done? Look at the posts on this blog about the new Trotwood superintendent, Tyrone Olverson. He had applied to be DPS superintendent when they hired Corr, but didn’t even get an interview. When Corr was fired, no consideration was given to bringing David Lawrence in for an interview- even though he was still on the payroll and was passed over for Corr.

Of the three finalists in the Corr pick, Roberson has left the district to be replaced by a white woman who sent out requests to all principals to fill out a blank spreadsheet on all their students on IEP. In Dayton, that’s well over 25%- and, a database already exists. Currently, the district doesn’t even have software to manage IEPs nor do they have a solution in place. Nobody seems to be in charge of IT since they RIF’d their last IT director back in November 2017 when the district lied and said they were broke.

Dan Schroer, went on to be the new Superintendent in Springboro. A district that had been in turmoil thanks to a dysfunctional board. Less than 2 years later, the district passes a levy on its first try (a first) and they get an A from the state. One of only 28 districts to do it.

Back to no plan Lolli. Since she’s been in charge, she’s spent money like a house on fire, giving teachers retroactive raises, hiring high-priced administrators, and spending money on consultants without explaining the value proposition. The board, sits there mute. No demands for projections on how this will payback- or bring students back. Just like Wright State, Dayton Public Schools is suffering enrollment declines the likes of which we’ve never seen. To further screw with things, Lolli runs an illegal school closing task force which only decides to close 1 building (Valerie) and move HQ across the street (waiting to hand the old HQ over to Sinclair for some sweetheart deal that’s been not-so-secretly pre-arranged).

Lolli has never completed a single contract as a Superintendent in her life. This has meant, she never had to renew a contract, or face public scrutiny. She won’t complete this 3 year sweetheart deal either- since she’s capable of retiring at any time, and incapable of passing a levy (which this district will need in 1 year or 2 thanks to her wild spending).

When the District got the F on September 13th, her immediate response was to blame a software company, which she plans on suing, even though it won’t change the score. She has proclaimed in public:

“The first thing that I will assure you here, as a City of Learners in Dayton, Ohio, is that Dayton Public Schools is only an F on paper,” she said. “We are not an F school district.”

If it walks like a duck, quacks like a duck, swims like a duck- it’s a duck. You don’t need a PhD to tell that Dayton Public School is an F district, it’s in black and white. Read the scores. You fail. 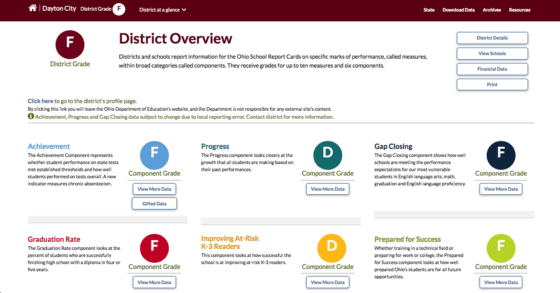 Denial is not a turnaround strategy. Maybe, Lolli needs to stop thinking she’s another Republican who found themselves in a position of power accidentally, her Republican hero- Donald Trump. He’d call this “fake news” and get away with it. Lolli isn’t Trump- even though she behaves like him, without the help of Twitter.

Having a plan is something the board should have been working on since day 1. You were 607, you were facing “State Takeover” or on the cusp for the last 5 years, this is no surprise, yet:

School board members have long talked about a need for an updated, official plan laying out a direction for the district.

“Our hope is that we have a strategic plan that is measurable, that is attainable for the district focusing on what is most important – and that is academic achievement, graduation and preparing our kids for life after Dayton Public Schools,” said Board President William Harris…

In an interview, Lolli laid out specific areas that will likely be discussed: academics and instruction, finance, culture, safety and security, and technology.

“We will set some short-term and long-term ideas out there,” she said.

Lolli has been superintendent for 9 months- and is just now putting out “some short term and long-term ideas out there”- excuse me, what have you been doing since you were put in charge? 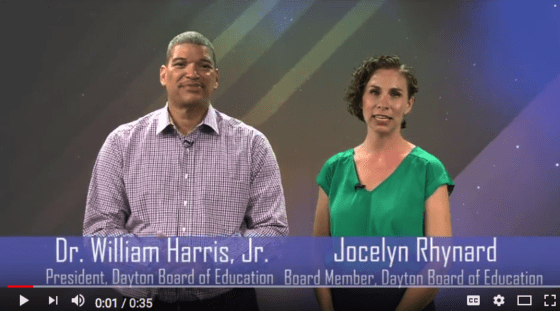 Harris is total fail. He still likes to call himself “Dr.” in a professional setting, even though he’s a Reverend, not a PhD or MD. And of course, he was put in charge by this board because he’s black. A move made by a dumb racist on the school board, Sheila Taylor, and followed by the rest of the idiots- including Mohamed Al-Hamdani, Jocelyn Rhynard, Karen Wick-Gagnet and Rev Walker. McManus, who should have been president, always being one to be a peacemaker went along with it hoping to bring some semblance of leadership from the VP chair. He’s failed.

Since Lolli has taken over, she’s had no problems spending money on consultants, including $1800 to local PR Firm Fahlgren Mortine. One has to wonder why, since the district already has a three year million dollar plus purchase order sitting open with The Ohlmann Group. Never mind that the board has publicly lambasted Ohlmann and wondered what they bought.

I brought the Ohlmann group contract up in my last speech to the DPS board on Tuesday.

Reportedly, Harris asked if it was really true I’d not be back, gleefully. You’re on your own dude. Enjoy the highway to hell.

Because, here is a perfect Libbie Lolli move, the reason she was hated in every other district where she served, after getting an hour-long dissertation on the why the district is now worst in the state, 608, her response, as if this was all new to her, was to announce that she was going to cut an instructional day for every DPS student and hold inservice training for staff. Because, well, you know, they don’t know what they are doing:

Each Dayton Public School will close for one previously unannounced day in October or November for mandatory staff training, as the district attempts to improve the quality of teaching in its schools.

A message Friday morning from Superintendent Elizabeth Lolli to school staff mentioned the threat of state takeover next fall if the district’s report card doesn’t improve.

“Great teaching, every day, is the only way we will be able to change the results. It is within our power and control to do that!” Lolli wrote. “Beginning in October, schools will be closed for one day in groups of 2 or 3, to focus on teaching strategies and expectations for DPS classrooms.”….

Lolli said she was not surprised by the state’s critical evaluation of DPS teaching. She said the district has been working to improve “instructional design,” but it’s not a simple or quick process, saying DPS is in the second year of a three-year rollout.

“We didn’t have an instructional framework when I arrived,” said Lolli, who is starting her third year in DPS. “We’re trying to get caught up. We don’t want to have our staff lack the quality instructional practices they need and want. They don’t want to be behind their peers in other schools. But you have to have high-quality professional development and time to implement it if you’re really going to make a difference.”…

Her letter to teachers called them “the hope of the district and the students,” calling for everyone to pull together and change DPS’ report card grade from an “F” to a “C.”

“I think we can make some impact with this,” Lolli said later Friday. “Will it solve the problems tomorrow? No. But we’re on our way.”

Insulting your employees, with the support of the School Board is not a good way to go from F to C.

Any school board with an IQ of over 10, would ask where has a day of training ever lifted performance? And, if this was the case, why didn’t your training before school even start cover this material? You already knew the preliminary district data was going to bring bad news.

When I got to the point in my speech where I said I just couldn’t bring myself to go to the board review session because I couldn’t take being around idiots- there is a very faint noise from the audience on the video. It was board member Karen Wick-Gagnet’s husband exclaiming “What the fuck” as he sat behind a group of DPS ESL teachers who were there trying to get guidance for doing their jobs.

Yes, what the fuck.

Taking kids out of school so you can school your staff, because you have no plan, after three years on the job. It’s time Libbie Lolli be shown the door, along with the entire top level staff. Clean house. Oh, wait! That’s what the State takeover will do in exactly 1 year.

The question is, why do Dayton School Students have to suffer this clown show another day?

If you need to see what a school board that actually cares about student achievement looks like, watch one of my videos from Trotwood. As different as night and day.