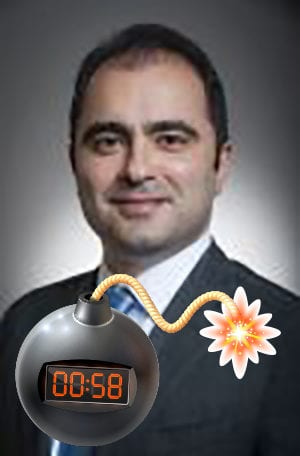 Dr. Baguirov dallies along while the Schools fail.

The Dayton Board of Education is lead by Dr. Adil Baguirov, who seems to think that the world waits for his decisions. Apparently, the 2 year deadline for State takeover hasn’t lit a fire under his butt, but it seems to be under others.

Today 3 Dayton Public School teachers quit, (update as of Friday, Jun 9- he’s remaining). Between the leadership vacuum, the impending takeover, and lower pay scales, everyone who has to depend on Dayton Public Schools for their paycheck is running scared and away from an already demoralized district.

Dr. Adil Baguirov, well, he’s out of town, so no new round of interviews till next week. One of their finalists already is probably going elsewhere. Time doesn’t wait, but Adil does. And note, the candidate from Beavercreek- with a much smaller responsibility than what the two DPS candidates have- was being paid at least $113K a year. That’s probably more than Gregory Roberson or David Lawrence make for dealing with a district twice that size- but, no- Dr. Baguirov doesn’t worry that maybe one of them might go apply for that newly open position and say “we’re done waiting” for his extended, leisurely timeline for selecting a superintendent. Remember- Beavercreek isn’t failing. It’s not at risk of a state takeover. It has money, computers, facilities, and, no one gets stabbed on the playground in broad daylight.

Why the board kow tows to the bullying of Dr. Baguirov is a mystery. There are six other people there, who have to realize that the market for superintendents willing to risk taking over a failed district for a 2 year turnaroud is kind of slim. But, wait, did I hear he wants to bring in even more candidates, and start over?

That a plan wasn’t firmly in place when they didn’t renew Lori Ward’s contract is the first sign of a clueless operation. That they’ve stalled so long that their candidate pool is shrinking is the second. That they don’t understand the cost of turnover, of firing, of learning curves- including the all important local socio/political landscape is beyond comprehension.

At this point there is only one candidate that they should hand the reins over to, and everyday they wait, is a few more empty positions to fill, and a day closer to the takeover. Make the decision next Tuesday or resign Dr. Baguirov.

Dayton can’t afford to lose any more assets on your education in hiring leaders.

As seems to be the norm on this blog, an excessively pessimistic opinion full of incorrect assumptions, Mr Esrati. DPS’ pool of candidates is rich and large, and that’s the opinion of even the OSBA. The Board is acting very fast, but does not rush the process. The Board needs to vet candidates – and that’s more than just a google search. And, by the way, there is no new process – it’s the same process, with some tweaks based on a large number of qualified candidates. The Board is very much on schedule to have a new superintendent by July 1, which is when the contract with current Superintendent runs out. So this entire blog post is once again just a lot of blame and unconstructive criticism puffed into air.

Dr. B- and those teachers that just left the district- they don’t care about your process- or waiting. The clock is ticking.
How many more departures can we wait for?
The real pool of qualified candidates who can step into your worst district in the state and turn it around in 2 years is in fact minuscule. You’re the only one who doesn’t understand that dynamic.
You don’t even seem to understand that carts for Chromebooks are just overhead- that cost as much as half the chromebooks they house. Total waste- but you love that idea. You aren’t working within the real time, real world Dr. B.
You’ve lost one candidate. Keep drawing it out- and you may lose more- and in the meantime- more people leave, more offers come in, and time is wasted.

The mindset of Adil, trying weakly to uphold the status quo, is spoken like the selected group of insular insiders found throughout leadership in the Dayton area. They keep clinging to the disintegrating infrastructure, like Nero when Rome burned. Their minds will never be changed, but we will keep on keeping on shining light on the failed systems.

I say we take off and nuke the entire site from orbit. It’s the only way to be sure.

While there might be a few self-sacrificing, idealistic teachers interested in working for DPS, most are going to avoid that school system like the plague. Describing the pool of candidates as “rich and large” is pretty much B.S.

For most professional educators, DPS is among the least desirable employment options.

I’m not sure exactly what happens when the state takes over a school system. But I do know that DPS stopped working years ago, and the board hasn’t been able to get it to function.

How much worse can it be?

[…] chastised DPS BoE president Baguirov for fiddling while Rome burns. After the only outsider left, left, there was a quick scramble to enlarge the pool- and more […]