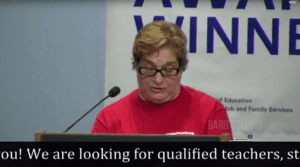 No other school board meets as much and does as little as the Dayton Public Board of Education.

They have a “Parliamentarian,” Joe Lacey, who is a member of the board, which is far from ideal:

This is only a part of the problem. But, at the end of the last board meeting, held on a Wednesday night (not the normal Tuesday- which makes problems for Mr. McManus who works second shift in Columbus) when “New business” came up- it wasn’t business at all- just speeches by the board. Rambling on about what you did the last week, while hourly employees wait is not in the best interest of the general public.

There are a million ways to run meetings. However, when a board of directors is meeting to review and guide an organization with a leader they’ve chosen to do a job, shouldn’t the leader do most of the talking? Explaining what the district is doing, why, and how its performance is improving? How initiatives are progressing, reviewing metrics? Updating on the status of directives she is given by the board? Never a public mention of posting the position of “Executive Director of Communications” at any meeting, but the posting was up and changed this week.

What an agenda should look like is something I’d love to show this board, but, since they refuse to investigate the eligibility of Dr. Adil Baguirov to be on the board, (he’s lived outside the district since November of 2015) I think the first order of business is to show this board the door.

Which brings us to the mysterious Friday morning meeting to review the 5 year projections of the Treasurer. Why is this not being conducted at a normal public meeting, on a scheduled Tuesday night should be the first question? Why did we show up with a video camera? Because we knew something was up. We’ll post the entire meeting soon. But, what was up is of more interest to us- I own the ad agency that was the low bidder on the contract to do district marketing– and have been hyper critical of the crappy expensive campaign done by the highest bidder and winner of the RFQ process. So what happened? Superintendent Rhonda Corr twice interrupted the board meeting with the treasurer looking for the meeting with the Ohlmann Group- who wouldn’t start their meeting with the district without board members Walker and Baguirov in the room.

That Corr didn’t know what meeting she was crashing the first time should make you wonder.

That two members of the board are meeting with a vendor- behind closed doors, should also concern you. Because, board members have no business conducting school business without a quorum in a regularly scheduled meeting- ever. We asked to film- but were told no.

There is no doubt the board needs marketing and public relations help- during the course of the Wednesday meeting when a whole big batch of teachers were resigning (a regular occurrence these days) and one of them got up to tell the board why she was leaving- the geniuses at DPS-TV were running a crawl across the bottom of the screen, asking teachers to come work for the district.

We have a technical term for this in marketing- it’s called cognitive dissonance, the rest of you would call this just stupid.

I have her “crawl segment” in the middle of my speech.

And as a final kicker, at the very end of the meeting, Rhonda Corr announces she’ll be introducing a student handbook at the beginning of next school year. This was directly out of our original marketing proposal to the district. We thought it would take over a year to create, with participation from parents, teachers, students and alumni. We thought it would be a tool to help explain the new values and focus of a newly rebranded district. So glad she’s just thought of this now, for next year. But, this is her Standard Operating Procedure by the seat of her pants. Remember the RIF? The Bus deal? Both rushed through as if a last minute afterthought. Sort of like holding a special meeting on a Friday morning, ostensibly to review a 5 year budget plan…..

I thought DPS liked ppl that fly by the seat of their pants. I tried to warn you David! Corr has no
Original Thoughts! She is just a waste –
A waste of money, and time!

“Bag Man” Baguirov needs to move back to Dayton or resign. Is there anybody out there that can do a thorough and complete background check on this guy? There’s a lot about him that just doesn’t add up.

Joe “Hoodie” Lacey? I get the sense this joker just wants to be in charge of something, anything, just so long as people have to listen to him talk. Send him packing, but give him a nice, new hoodie as a going away present. Then insist at he go away.

Thank David for keeping the community abreast as to what is happening with DPS board. It is my hope that you are running. I would love to be of assistance to you to get you elected.