Thursday night the Ohlmann Group gave a presentation to the board. Basically, a show and tell on how they made over $40,000 go out the door.

This wasn’t a presentation of the plan for approval, or sharing what comes next, it was just here is what we did, what we think it achieved, and, why we couldn’t do it better. 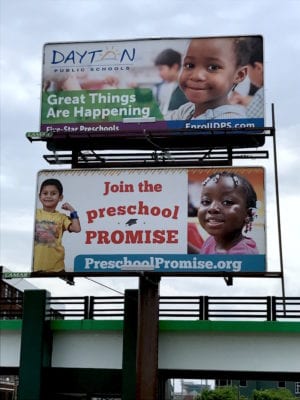 The problem with “Great things are happening at DPS” is it’s not based on facts. Just saying it doesn’t make it true- just because it works for Donald Trump doesn’t make it work for a district in distress.

Not only is the campaign for DPS bad- the campaign for the PreSchool Promise is just as bad- and a horrific waste of money. Considering the digital divide in Dayton, not having a phone number is criminally inept.

Spreading the message via billboards, radio and digital channels isn’t effective either. Remember, there are only around 24,000 kids in the district, and 13,000 already go to DPS. Your target is the 11,000 who don’t- and since many of those households have multiple kids, a direct mail campaign would have been more effective- as long as you weren’t trying to lie.

The reality is, most charter schools in Dayton have test scores worse than DPS schools- and since DPS transports these kids- they know exactly who they are. Try telling charter parents what the benefits of sending their kids to DPS over a charter are:

And a whole new leadership team working to rebuild the district with a plan, including a new transportation plan and brand new buses to make sure your kid gets to school.

On the flip-side, every kid that’s already enrolled at DPS should be taking home information about what’s in store for the district next year. Share success stories of recent grads. Talk about the programs in place to get scholarships, the ability to go to Sinclair for free. How DPS has a new groove.

At the same time, the district should be going out to the community and telling their story to neighborhood groups, to churches, to politicians and to business groups- asking for their help and involvement. If in fact “Great things are happening” those stories should be easy to tell.

The Ohlmann Group did get one thing right- the proprietary website content management system built by Upward is an expensive disaster and should be scrapped. This board picked this vendor- and has paid through the nose to keep it going. Building all these microsites doesn’t solve the problem- it just makes more problems. The district should have built a whole new site using industry standard open source solutions.

Considering the contract for the Ohlmann Group was $50K over my bid, and that we included full PR advice and 24/7/365 response, one has to wonder if the district is planning on bringing in a replacement Public Information Officer, since it’s obvious Ohlmann has zero interest in providing the board with support and guidance in handling issues at meetings, or to help them manage PR disasters like the handcuffed 4th grader, the Dunbar/Belmont thrown game, the bus buy, or the hiring timing on the District Athletic Director. While we didn’t get the contract, we’re there at the meetings to tell you what and why your school district is failing at every turn.

Ohlmann brought three people to the meeting, had one speak, and snuck out of the room as soon as they were done with their $40K worth of excuses. Totally ignoring the 400 teachers in red- there to start their own PR campaign to challenge the district status quo.

The board bought the Ohlmann contract, site unseen, mostly because they were promised a 90 day opt out at any time. Why they haven’t given Ohlmann notice at this point is beyond reason.

Stock photos? Microsites? A campaign based on an untruth?

Is this really the best DPS can do?