Judge Skelton asked for both sides to file a memo arguing if ORC 121.22 trumped Rule 65, even though he made it clear that he believed it did to start the court arguments.

And he asked us to use a pen, not a shovel.

To me, the pen is the tool that changes history. Shovels are what you use to muck a stall. Lawyers love to shovel. I love to write.

So, my filing is 9 pages plus attachments. I strayed outside the lines of strictly interpreting the issue of ORC 121.22 vs Rule 65, by explaining all the actions of the task force amounting to repeated  and willful violations of the law. Since the defense tried to claim that a TRO as required by Rule 65 was moot, since they had already violated ORC 121.22, and that he believed that sticking to the law in the future would some how fix things- clearly had to be addressed (total bullshit, needing a bulldozer instead of a mere shovel).

Needless to say, the research was enlightening.

The Montgomery County Clerk of Courts site doesn’t like my filing.

Unfortunately, the Courts website (the one with the 35 page instructions on use) gives a 404 error when trying to upload the the large document that the school task force was given during their illegal tour. I had to abbreviate it just to upload to the site. Acting in full transparency mode, I’m posting it here, now. I’m sure, this will give the advantage to the defense, who will now, re-write their memo, turning it in at the last minute- and wasting considerable tax payer dollars doing so.

That is the crux of the problem with ORC 121.22- the burden and risk, is all upon the plaintiff- who risks getting billed for court costs and attorneys fees if their motion is found to be frivolous. Public officials who break the law, on the other hand, suffer zero personal risk, having tax funded defense at their disposal.

It also turns out that removal from office has been a false threat, enforced almost never. Our “Sunshine Laws” are in practice, just blowing sunshine up our collective butt.

Or at least they have been in the past.

The actions of these elected officials and employees of the district have been so wrong, so wanton in their disregard for the law, that maybe, just maybe, this will be a case that makes a difference. Or not.

At this point, the judge will consider both filings, and then offer a conference call on how to proceed.

My call is that he issue the injunction, which allows me to begin the process of contacting the Open Government Unit to begin proceedings to remove Jeff Mims, Robert Walker, William Harris and Mohamed Al-Hamdani from office.

He should also order the task force disbanded, and all members ruled ineligible to discuss the issue of school closings because they participated in an illegal secret meeting. This means, Acting Superintendent Lolli, Associate Superintendent Burton and Treasurer Abraha would all have to sit this one out.

Mims would have to be replaced by election, the three school board members would be replaced by those chosen by current remaining members, John McManus, Sheila Taylor, Jocelyn Rhynard and Karen Wick Gagnet, from members of the community that ask to sit on the board.

Here are the documents for you to read, which are also available on the County Clerk of Courts site. 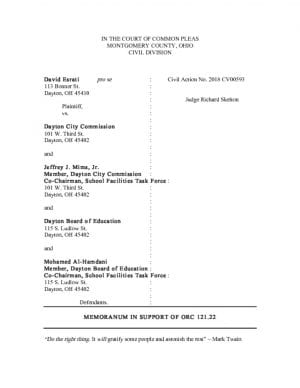 The Esrati filing on which law to use 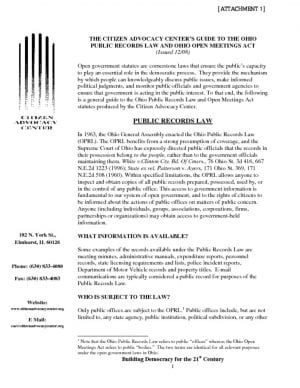 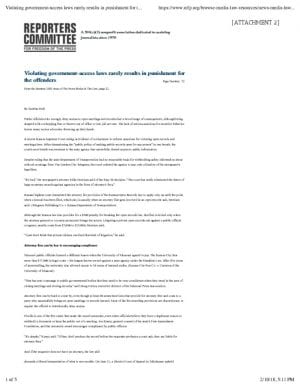 Document From Media and the law explaining that Sunshine Laws are weak. 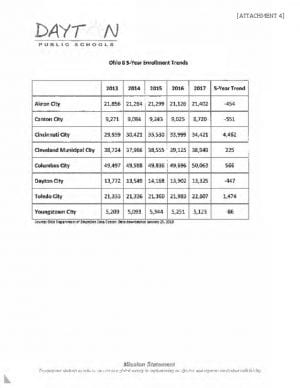 9pm Monday, 12 Feb 18 The city uploaded their response after 4pm. They had until midnight. It’s odd in that it focuses on the judges ability to shut down the task force, which wasn’t what he asked for, and some case law trying to grasp at straws that Rule 65 applies, without any specificity to the case.

9:15 am Tuesday, 13 Feb 18. The School Board attorney also filed a brief- more to the issue of Rule 65 and also arguing that the judge can’t disband a task force. Really? How can a task force that violates the sunshine law- by meeting in private, possibly contribute to any discussion the board will have about the issue of closing schools, and, how can any employee of the district, that helped coordinate these secret illegal meetings not put the board at risk of having any decision they make to close schools, instantly overturned? They can’t. And, the total page count of both their briefs equals mine. Yet, they miss the point of the special protections the sunshine laws are supposed to provide. 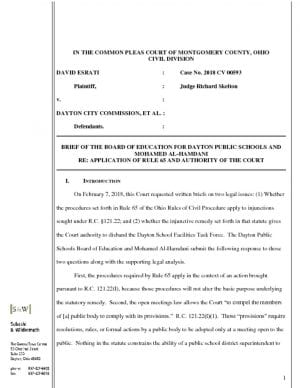 The more competent response filed by the private attorney for the district. Still wrong. 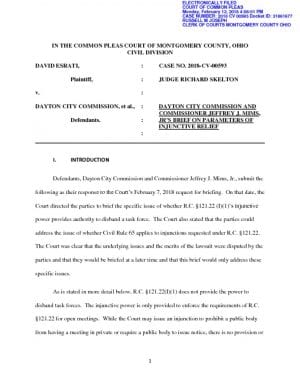 The city filed for the school board. It’s short, and harmless

Go get ’em on this, David!!! I think that far too many “boards” don’t take the sunshine laws seriously. I can think of a couple right now that are less than transparent. One of them schedules “retreats” for their board members that are outside of the area they represent (ie – the retreat is held in a different county). If my knowledge of the Sunshine Laws is correct, this is illegal.

One other thing, if these visits to the schools are considered “public meetings”, then someone should probably be responsible for taking note and publishing minutes of these meetings. I do believe the Sunshine Laws require that minutes of public meetings be made available to the public upon request.

Interesting that they say the superintendent can create a task force because she was instructed by the board. Looking at the board minutes from the 19 December it just states her team…I would imagine her team would be the people she works with everyday. I could be misinterpreting as I am rusty on reading legal docs.

Another thing I wondered about since they kept stating it was a safety issue to go on the tours is if they properly vetted all members of the task force. If they are going to be acting in an official capacity for the district I would expect them to have to adhere to the background checks etc to be allowed in the schools.

Thanks Bubba.
I’ve got a video coming that shows the hypocrisy of it all.
@Bob- they didn’t discuss the team- or a task force- or who would be on it in public. That 3 members of the newly elected school board hadn’t even been seated yet- should have set off alarm bells. Nobody ever took a vote to put Al-Hamdani in charge. Whole thing is a construct.

Wow. I am glad you have the resources to go after DPS and the City Commissioners. I think we need to find a way to assist financially, perhaps set up a funding account where people can do not small or whatever they can afford. You are doing a lot of leg work on behalf of this community.