The Ohio High School Athletics Association sent a clear signal to Dayton Public Schools last year after they identified DPS District Athletic Director Mark Baker as the linchpin to the attempt to throw the Dunbar/Belmont football game. Instead of letting Baker go, and moving forward, DPS under former Superintendent Rhonda Corr, dug its heals in and gave him a two year contract.

This is what happens when people like City Commissioner Jeff Mims is advocating for you from the sidelines. Even though Mims left the school board and the state school board for his eventual throne on the City Commission, he still thinks he’s the man behind the curtain at DPS. Why else would he be the co-chair of the illegal task force on School Closings?

When OHSAA vacated Dunbar’s win in the tournament for failure to sit players for 2 games due to the bench clearing brawl at Thurgood in January, moving Thurgood back into the tournament, DPS decides to go to court to force Thurgood out and Dunbar back in. How does this help DPS students at Thurgood?

Legal action should have been taken against OHSAA- when they declared that students enrolled in Charter Schools now had to play sports at the school closest to their home- instead of closest to their charter school- and kids were torn from program after program- DPS sat on their hands. Because they aren’t really in it for the kids- they are in it for the money, just like the charters. 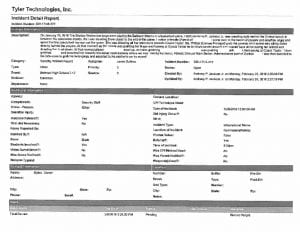 Defending Dunbar and Rookie Coach Chuck Taylor seems odd, especially after they had ordered Chuck to sit two games for his calling a parent a bitch. I’m unable to confirm if Taylor did in fact sit two games. From the attached reports on that incident:

Mr. Taylor in the Dayton Public Schools Athletic Handbook it states: Our goal is to not only be successful in our endeavors, but also to act according to the ideals of both good sportsmanship and good conduct on and off the court. Our program should operate with: integrity, honor, respect, and accountability. The use of the word “Bitch” to refer to a parent regardless of the situation showed a disrespect for women and our parents in which the Dunbar Varsity Team and the Dayton Community witnessed. This sets a poor example for the young men under your leadership.
Due to the severity of this incident I am imposing a two game suspension that will be served on Tuesday, January 30, 2018 and Friday, Friday February 2, 2018. Lastly we cannot always control the actions of our parents but we must control the way we react to them.

The program has been in total disarray since Baker was given his contract, and then forced the most successful coach in Dayton athletic history to the side to replace him with Taylor.

I’ve been informed that both Mark Baker and Dunbar principal Crystal Phillips are on paid administrative leave right now. This is unconfirmed at this point.

Acting Superintendent Elizabeth Lolli held a really stupid, short press conference on Thursday night with the three members of the slate, Harris, Al-Hamdani, and Wick-Gagnet standing mute behind her. The board members refused to comment, however, the choice of the three is telling.

The three remaining members who made the mistake of hiring Baker and letting former coach Pullen go, were no where to be seen: McManus, Walker and Taylor.

The lone independent candidate, Jocelyn Rhynard, seems to be doing her standard silent analysis of the issues, and may or may not weigh in before this is said and done. She’s cautious to the point of being ineffective so far.

What seems to be missing from all this is accountability at the top. Over Mark Baker according to the organization chart left over from the Corr era- is PR hack Marsha Bonhart, who had to have a hand in directing the press conference where nothing good was done.

It’s obvious that Lolli has no idea of how this is playing publicly. since she has zero connection to the community. Generally, this is seen as an embarrassing sidestepping of the actual need for action.

Litigation is never the best strategy for the court of public opinion unless you are either the underdog or absolutely guaranteed a win. DPS is neither in this case and will end up with even more egg on their face.

The only right course of action was to fire Bonhart, Baker, Phillips, Taylor and allow Thurgood to move forward and put this shitshow behind us and beg forgiveness from OHSAA.

Instead, we’re risking expulsion from OHSAA if we lose, and then, DPS will see even more exodus of students who used to stay in Dayton to be a part of powerhouse sports programs.

This school board and superintendent are getting horrible legal and strategic PR advice. You read it here first.

As usual, David – You hit the nail squarely on the head. This lawsuit has about as much of a chance of being successful as the proverbial snowball in Hades. Elizabeth Lolli appears to be an individual who would like to do the “right thing.” Alas, she has surrounded herself with a whole host of extremely poor advisors. The incompetence in DPS is so entrenched that I’m not sure anybody that was brought in to be Superintendent could right the ship.

An adult coach referred to a parent as a “bitch”? Within earshot of students?

That’s it, Chuck. You’re gone. Security will watch you clean out your desk and collect your personal property, then escort you to your car.

Best wishes for success in your future endeavors.

I am honestly surprised that parents with students in DPS haven’t organized a letter-writing campaign to BEG Columbus to take over management of this district. What are they waiting for? How much worse do things have to get before the state steps in? For those of us looking in from the outside and cringing, this is painful to continue to read about in the news every day.

Don’t forget totally inept Dunbar AD Boffman! If she would have handled this properly from the begining , filling the correct info on the OHSAA portal and making sure the players served their suspension none of this would have happened! This is on her more than anyone!
Baker, Phillips, Boffman and Taylor all need to go!

[…] for the record, I posted last Saturday, March 3rd, that DPS Athletic Director Mark Baker and Dunbar Principal Crysta… They got the story, a week later, today. Maybe I should call them the Dayton Week-Old […]