this post was published at 10:51 a.m. It set off a bunch of wheels in motion, and now, compromises and options are being discussed. I’ve changed some of the more inflammatory words- and removed some parts, in the hope that Rahn can be open again tomorrow- and that a sink solution can be in place soon- and we can more on. Typically, once I post, things don’t change. at 3:36 today – they did. This is a first. 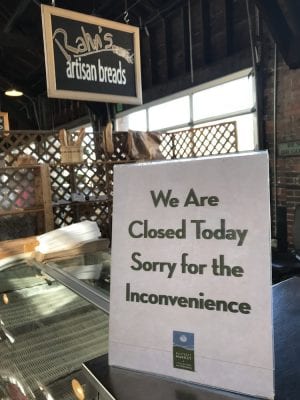 The scene at the 2nd Street Market on Saturday March 3rd at 10:30 am. Usually there is a bread line

The 2nd Street market has had a staple since it started- fresh, hot bread, from Rahn’s Artisan Breads. Until today.

full disclosure- I’ve been friends with Rahn since College at Wright State, and my firm, The Next Wave does work for him.

The Montgomery County Combined Health District decided to throw their weight around and closed Rahn down today because they believe they have jurisdiction. Rahn, as a manufacturer, falls under the Ag department which has a different standard than a food service provider. This has been the way it’s been for 15 years- and there has never been a single outbreak of food borne illness or issue.

What is causing the hang up? The health department wants a hand sink in his stall. Purell on a pump isn’t good enough. Gloves when handling bread isn’t an acceptable option. No, instead, we’ll close him down.

Note, the bathrooms for the market are almost directly across the hall from Rahn’s booth- no different than having a door on a bathroom in a restaurant where the hand sink might be.

The problem Rahn faces is if he brings the bread to the market hot, he has to slice it for customers on site, since it can’t be sliced hot- and bagged at his bakery.

Apparently, one person complained to the health department after 15 years, and the health department inspector feels that this is somehow their territory now. Options included a very expensive plumbing from the bathroom across the hall, a portable sink, or well, by the same standard food carts and trucks use- Purell or even a non-functioning sink.

This is a case of government shooting itself in the foot.

The person to call to protest this action is ___ ___________ at the Public Health Department- XXX-XXX-XXXX
If you’ve enjoyed the bread from Rahn’s- please pray.

Hopefully, he can be open on Saturday- so I can buy my mom her Chocolate Croissant, and I can get a loaf of sliced Abruzzi, and maybe even some Irish Soda Bread.

The name of the official that you redacted is still tagged at the bottom of the article.

I was happy to see that they were open again this weekend. I’d be curious to know what the compromise was that allowed it.

Andrew- very observant. Jake- they found a portable hand sink on ebay in Moraine for $600 and installed it. Total joke- but- it’s there now.