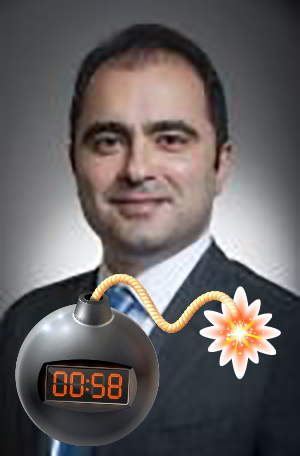 Dr. Baguirov is a time bomb. Don’t elect him to anything.

Frequent readers of this blog know the amount of time I’ve spent writing about the sheer audacity of this shyster. He’s committed voter fraud, he broke the residency rule for school board, he was responsible for the entire Rhonda Corr shit-show (not that he didn’t have lots of help from n00bs like Sheila Taylor and Joe Lacey, and Ron Lee), he personally got involved in a real estate deal that he had a conflict of interest in with selling the Patterson Co-op site to CareSource for half the market value, he totally engineered the bus deal- where he has a business that does business with the benefactors, but, on top of all that- he’s the biggest liar I’ve ever met.

The local Republican party should be locked up and put in jail for even letting him get on the ballot.

The local Dems should be locked up for failing to do anything about all of the above when the smoking gun of this video was released:

Before you buy into his “I was a poor refugee from evil Russia” schtick, he left out the part that he was born with a silver spoon in his mouth, and that spoon is still feeding him, without him filing the appropriate paperwork identifying him as a foreign agent.

He put $90K into his campaign, of his own money. He’s trying to out-SEO my posts, and fill up youtube with a bunch of videos. Do NOT believe a thing he says. There is zero reason to vote for him.

There are a lot of things that should have, could have been looked into by our prosecutors office, the Ohio Ethics Commission, the Ohio Attorney General, the Ohio Secretary of State- but, all of them, ignored it, because, frankly, we have the best government money can buy, and he has plenty of access to cash. Read about how a quarter million arrived in his bank account, right after he “won” in his unopposed race for School board- where he came in dead last: Dayton’s International Man of Mystery, Adil Baguirov, has ties to Russian “Laundromat”

I dumbed down the headline from Azerbaijani Laundromat to Russian at the time, I probably shouldn’t have, but, international diplomacy and intrigue isn’t everyday reading material for most Daytonian’s and understanding the Armenia/Azerbaijan conflict is kinda hard when most of you have never heard of either. Needless to say it’s sort of like the Hatfield/McCoy Feud- with lots of money and espionage.

I don’t expect him to win, or even come close, mostly because I don’t think there are a lot of hard Republicans willing to vote for “Baguirov” vs the guy with the same last name as Bruce Willis’s character in Die Hard, but, who knows anymore. If he does win, I’d be questioning the validity of our voting system, and if it had been hacked. That’s the technological skill set that Baguirov probably has behind his race. Think the whole Russian interference in the 2016 election- he’d be the person to test if the Russians can fix an election- and you’re the crash test dummies for it- since he’s already gotten away with fraud in the past.

Please, share this with everyone you know. Please go to Youtube and down vote his videos in record numbers, but don’t watch them.

Please realize the only mystery about Adil Baguirov left is why he isn’t already in prison for the voter fraud of claiming the house on Maryland Ave as his and his business partners residence.

Trust me- he NEVER lived in that house. And, you don’t want him in charge of the records for your house either.

I saw an ad for Adil on TV yesterday. On it, he said that the two most important skills for the Recorder position was to be a real estate expert and a technology expert. HUH??? You don’t have to be an expert in creating real estate transactions, you just have to be able to RECORD them!!

This whole election cycle has been a bad joke – and that includes both R & D candidates. I wish we could get really decent people of both parties to run for these positions. I’m really tired of going to the polls and having to hold my nose while voting. And more and more, it’s not voting “FOR” someone – it’s more like voting “AGAINST” someone. That’s not the way it should be.