The requirement of a political disclaimer only applies to the “little people”- the ones not endorsed by the backroom backstabbers who think they speak for the Democrats of Montgomery County. I’ve called them the “Monarchy of Montgomery County” for a long time- and said they run political offices and the patronage jobs that come along with power- on the “Friends and Family Plan” for a long time.

There was never a vote taken to spend money on the hit pieces they mailed out against Shenise Turner-Sloss and Darryl Fairchild (two democrats) and it backfired on them. Unions and other party members who were sick and tired of the backroom deals- came together and adopted the Rep Your Block program to start replacing the precinct captains that make up the voting membership of the party.

For those of you who don’t know about precinct captains and the party- it’s been intentional. This is part of the gerrymandering problem, the two “major parties” which is an oxymoron in every sense and shape, have rigged the system to put a whole lot of power in their own hands. They pick the voters for the offices- and do it down to the precinct level. It’s why I have always faced opposition in my precinct- and so this year, after 12 years as the Captain of 1D- I’m now 1E.

My opponent, backed by the party people- is Karen Wick Gagnet, a woman who isn’t even a registered democrat right now according to the voter roll. A woman who was elected to the School Board the first time- only to make some incredibly bad decisions- hiring Superintendent Rhonda Corr, paying their only hope at stability, David Lawrence to go away, and then promoting Libby Lolli to superintendent, despite her hire by Corr who they fired- and not doing any due diligence about Lolli’s trail of disaster through her previous jobs in Hamilton and Middletown. The damage Lolli has done to the schools, under Wick and friends is horrendous. Wick admitted she never even knew who David Lawrence was, or why the one person who demanded accountability in the classroom was capable of dividing the failing districts rank and file so much. None of that matters now- because turnover is running somewhere close to 30% and the district is losing students faster than ever. Wick wasn’t even able to properly fill out her petitions for the last run- despite “party backing” and had to rely on them including her on a mailer to get back on the board.

In South Park, Karen and her husband have been a force for good. Her husband, Jim, is a visionary rehabber/developer who has turned an entire block of Pulaski street from a slum into success. I’ve sung his praises before, even suggesting he’d be an excellent City Commissioner. However, she’s been more of a write the check backer- than actually involvement. I can count the number of times in 30+ years of neighborhood meetings she’s been to on one hand. She’s only been to Dem Party meetings when she had to.

So imagine my surprise when I get a mailer telling me to vote for Karen for precinct captain- and it doesn’t have any Karen specific information, nor does it have the required disclosure statement of who paid for it (a big naughty no-no). What’s more- other people in the Rep Your Block movement got the same card with their opponent mailed to them.

This counts as yet another one of the dirty low down tactics of a party that will eat their own willingly in order to keep power in their clutches. Even their darling Jocelyn Rhynard on the school board who decided she was going to run to replace Mark Owens, found out that the insiders had instead aligned behind the little incompetent tyrant Mohamed Al-Hamdani as their pick. Al-Hamdani was Nan’s favorite bitch-boy who started working on shutting down and demolishing the high performing Valerie Elementary before he even was sworn in (as documented by me with my “Goodbye Sunshine” video telling the story of his wanton breaking of all of Ohio’s Sunshine laws).

The dirty little secret of how the party has operated illegally for decades is that they never actively recruited precinct captains or asked them to actually work to get people involved in the party. What they did, was appoint their patronage job holders and union buddies to precincts they didn’t live in- and stack the deck. I’ve said for years that anyone who works for an elected official, who has a job to serve the public, shouldn’t be a voting member of an organization that picks the people who run elections, or anoints candidates as the chosen ones. It doesn’t pass the smell test.

And while the people who are in the party now don’t think they could ever elect me as Party Chair because, well, I disagree with them and their ways and have for years. So the question is if the precinct captains of Rep Your Block win- will their be enough of them to not elect the two insider political climbers- Rhynard or Al Hamdani, and to choose me- and if we’ll adopt Ranked Choice voting as the method of selection.

But in the meantime, which person should you vote for? Anyone who doesn’t have a mailer that looks like this: 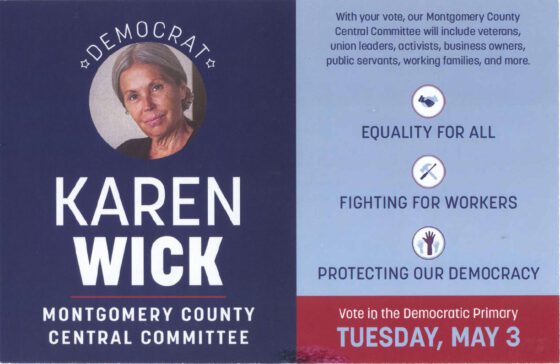 She’s not a veteran- she’s not even a registered Democrat, but she’s the Monarchy’s choice over me. 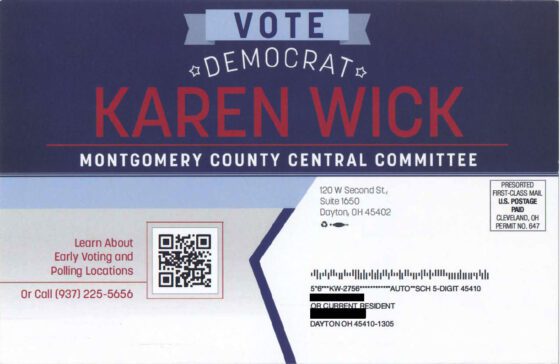 If you get a mailer that looks like this- vote for their opponent.

[…] Dem Party back to their old tricks | Esrati on Dayton’s next leaders; part of “The Esrati Plan” […]

My opponent send out those mailers too. Didn’t work though?????