How many quasi governmental organizations are there in Dayton that collect tax dollars, but voters have no control over who controls those dollars? The list is long- and wrong. Accountability at the ballot box is a basic premise of democracy.

In some major cities, the Mayor is the “buck stops here person”- and held accountable for the performance of everything from the schools performing to the trains running on time. Think NYC or Chicago. In Dayton, we seem to have a lot of folks who don’t report to anyone, but are in control of large amounts of tax dollars.

Bob Ruzinsky, my former neighbor, is now in charge of RTA, and bringing his mad accounting skills to the C-suite, rearranging routes, and cutting services in the name of operational efficiency. Ruzinsky makes more than most city managers in the area, the country administrator- because he’s one of the kings of the quasi government orgs that abound. RTA gets a lot of money from a cut of the Montgomery County sales tax- which was part of the reason people were pissed when services to important Greene County locations like Wright State, The Fairfield Commons Mall- and now the Soin Medical Center.

And while lots of business people and Republicans seem to believe that government needs to run like a business- that’s a major miscalculation of what government is supposed to do.

Politicians who are elected, to jobs that pay more than their constituents make, for less work and responsibility (in Dayton’s “City Manager” form of government- the Mayor and the commissioners are supposed to act as a board of directors- leaving the operations to a professional administrator, who is supposed to be held accountable for operational excellence- but of course, that’s not how it works). In order to raise money for expensive campaigns, they have to get cozy with people who can afford to support their campaign chests- meaning local businesses and power brokers, and then, go on to pay back the favor with “economic development” – which is another way of saying take from the poor and give to the rich.

Developers, landfill operators, demolition companies, contractors, are some of the favorites in the pay to play- others are large institutions/employers- hospitals, insurance companies, universities etc.

So when it comes to decisions about RTA are really firmly integrated in the success or failure of many communities- and their economic development, it’s probably a good place for some elected oversight.

When you realize that NYC without subways and buses would shut down tomorrow- you get a quick lesson in the importance of public transit in densely populated cities. But, wait, we’re not “densely populated” so why do we need to invest public dollars in public transit? Besides, buses are only for poor people who can’t afford a car…. wrong.

Cars are the bane of urban planners. The best thing the pandemic did for this country is establish the viability of working from home- where your employer doesn’t have to not just pay rent to have office space for you to work in- but also have parking space to accommodate your vehicle. Cars are not adding value to cities- the space used for parking lots, parking garages, is space not used for actual productivity. This is why the advent of driverless cars changes everything- your car can return home to wait for you to finish work- or go pick other people up while you’re at work.

Streets also cost money to maintain, and one bus is a lot easier on a road than 40 cars carrying one person each- less fuel, less pollution, less accidents, less traffic, etc. and zero parking costs.

And, cars are giant expenses to most Americans, usually coming in as the second most expensive thing they own after their homes. Think of the savings of not having to have a car, insurance, maintenance, fuel, parking- and realize that if you can walk to work, walk to a grocery, pharmacy, hardware store- all of a sudden, your personal wealth- your economic fortunes change. That’s why long ago- instead of giving tax abatement to business based on jobs, I proposed tax credits for employees who can walk to work back in 2011– or earlier. By the same standard an efficient working public transit system can change the game- and has, when it was done right- like the Wright Flyer, the free shuttle bus for White folks and wealthy college students, Hospital employees etc. 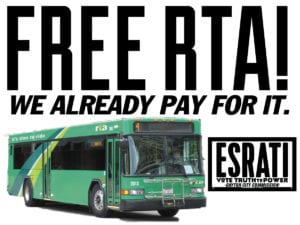 Our community would prosper by taking this free transit model county wide. Ridership would increase, needs for parking lots would decrease, air pollution and wear and tear on roads would decrease and the lowest paid people in the community- the essential service workers, could make their dollars go further.

I proposed free transit in my last campaign, and had a plan to pay for it via ad dollars. But, while ad dollars could work, the reality is- free transit just makes a lot of sense- especially when we’re building jobs out in fields by the Airport- where the roads weren’t built for that kind of traffic. In fact, I believe we should be building light rail connecting the airport and the warehouse/distribution district with downtown and then continue to south suburbs ending somewhere near the Dayton Mall area. Another line would start at the VA/Eastown and shoot straight over to WSU and WPAFB. These two rail lines would fill the new downtown housing boom with even more value. It would cement Dayton’s reputation as an affordable, desirable forward thinking community and it would pay huge dividends in increased disposable income at the lowest levels which helps push money into local small business.

The amount of money collected for fares, along with the headaches of accounting for it, are a tiny faction of the funding of our public transit system. We have to do better than cutting routes, lamenting the difficulties in hiring drivers (the dealing with policing the fare box and having to interact with riders is one of the reasons CDL drivers prefer a semi to a bus job), and trying to evaluate performance with a straight P&L statement- instead of treating transit as an economic development tool that benefits all of us.

I’d love to hear your thoughts on the matter. Comment below.

Well:
I note that Sinclair Community College is under the control of the Ohio Board of Higher Education, which is composed of people appointed by our elected officials–and also under the standards of the North Central Association’s Higher Learning Commission, which itself must pass muster with the US Dept. of Education. That’s all citizen control through the channels of representative government. Every public university and college in the state is under the same controls. Now, if you want to talk about University of Dayton receiving public money…
I would love to ride RTA, but they don’t have sensible routes, they no longer do transfers, and they don’t care about operating on time.

@Thomas Ruddick- There is no one we can recall for oversight of Sinclair Community College, or now just “Sinclair College” who has decided to build facilities in other counties that don’t pay a property tax to support it- or to build facilities on the borders of other counties.
As to RTA not having sensible routes- etc- again, if we had someone we could remove, maybe the buses would move better.

A few years ago RTA quit servicing the route that went from Miamisburg, through Germantown, out to Farmersville and back to Miamisburg. They did a study and determined that only 3 or 4 people rode that route in the morning and the evening, but nobody was on it during the day. I believe this was one of the first routes where they introduced using UBER or LYFT instead of the RTA. You fire up the app and a car comes to get you. Basically you could get dropped off anywhere along the “old route” or you’d be taken to a “hub” in Miamisburg (not the hub behind the Dayton Mall) to wait for the connecting bus. There was some sort of code that you entered in the app and RTA was charged directly for the ride. RTA determined it was cheaper to do this rather than to maintain the route.

I’ve lived in Dayton since 1972. The only time that I ever stepped foot on a RTA bus was to take the shuttle from UD Arena to the Dayton Airport for the Air Show. But, I’ve ridden public transportation multiple times in NYC, ATL, CHI. It’s a necessity in those places.