Political ads are supposed to have disclosure statements- who paid for it, who sponsored it.

Of course, if you are going to go after David Esrati, you can do it anonymously because you are a worthless piece of $h!t. Not the first time someone has done stuff like this: Wacko mail author identified, questioned, let off easy

When a neighbor sent me the pictures of the postcard that went out to my neighbors, I forwarded the photos to my opponent for precinct captain- Karen Wick Gagnet- owner of Coco’s Restaurant and School board member. She immediately told me she had nothing to do with it, suggested that I know she wouldn’t do that (she was a close friend and client for over 20 years). I asked her to issue a statement to disavow it, she refused.

She later said: “I have been assured by Mohamed that this piece is not from him or any of his associates. The Union stamp at the bottom is fake.”

Yet still refused to denounce it. 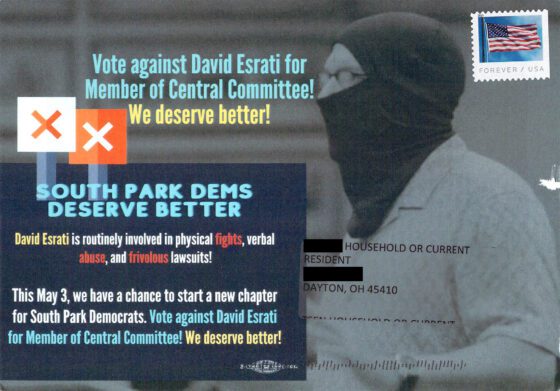 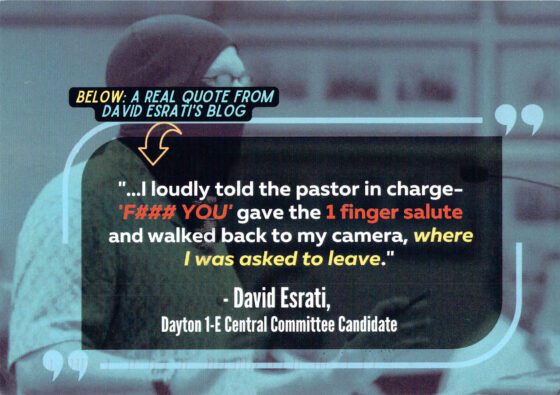 That’s as good as tacit approval. The fact is, Karen can’t speak for herself, her friends, or the people of Dayton- without someone telling her what to do. Previously it was Nan Whaley and Mohamed Al-Hamdani. Who did this? My bet would be Mohamed, Russ Joseph, Marty Gehres, but, there are lots of people sucking the teat of the Monarchy of Montgomery County who are deathly afraid of someone exposing their criminal behavior, the kind I expose, like John Theobald, former assistant to County Commissioner Debbie Lieberman, who was directing no-bid Public Health Contracts worth $225K to his own firm (he later said he was the co-founder- after he left Debbies gravy train job) : When the wrong answer and no response spells corruption and coverup

The difference between me and Karen- she sends out mailers, I knock on doors and talk to my neighbors. I’ve probably knocked half the precinct since Thursday night. Talking to people, giving them something meaningful, explaining why the local dem party is off the reservation. This piece proves it.

Mailed to people with a hand applied label, mailed with a first class stamp- no disclaimer- but a union label.

The claims don’t include references- so I’ll provide them.

Below: a real quote from David Esrati’s blog “…I loudly told the pastor in charge- “F###YOU” gave the 1 finger salute and walked back to my camera, where I was asked to leave.” David Esrati Dayton 1-E Central Committee Candidate.

It was when Nan Whaley and Phil “The Torturer” Phil Plummer were working together to sink an attempt at Unigov- and were holding meetings in churches and getting people up in arms about spoiling their gravy train. Read and learn.

Let’s see- physical fights? Would that be when former Mayor Richard Clay Dixon took me outside a church on Edgar Avenue back in 1993 and tried to beat me up? He was the Democratic Mayor- and the candidate that Mike Turner only beat by 400 voters.

Verbal abuse? Like all the times the people in power in Dayton, decide that they don’t want to hear the truth?

As to frivolous lawsuits? I’d say champion of Open Meetings and integrity in government.

If there is one thing I’m known for it’s that I take responsibility for my actions and that I always sign my name.

And, I don’t send mailers to my neighborhood- I knock on doors and talk to my neighbors. So, when this backfires, like the attack ads that the party sent out about Shenise Turner-Sloss and Darryl Fairchild did, and I win as precinct captain, we’ll have one more reason to restructure the Dem party so that it’s actually run by adults.

David — Wow. What a system of deceit. So sorry that you were not elected to the Central Committee. You could still run for Chair, according to the MCDP Constitution. But you already have a lot to do in your campaign for OH-10