I was in New Orleans on Halloween for a big conference. I rode public transit almost exclusively. The streetcar, the buses- all were all you could ride for $3 for 24 hours. At times, streetcars would just pass me- because they were so full. Public transit when done right works great. 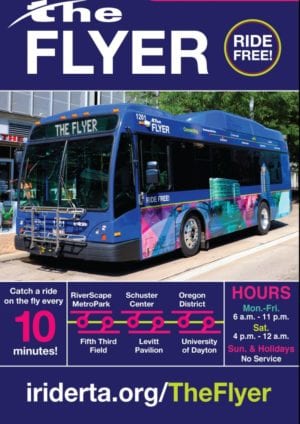 And finally, in Dayton, we did public transit right, or Wright, or whatever… but, it’s very white. The new “Free”  Flyer circulator runs between UD, Premier and CareSource, and they’ve partially funded it, or at least so we’re told. Of course, since none of the three pay property taxes, running a public free bus line for their employees and students in the name of “economic development” is fine.

I used it the other day to run down to pick my car up at Dayton Transmission Repair where they were doing a tune up. Full disclosure, they are a client. I walked four blocks to Warren at Apple Street, waited about 3 minutes and rode the bus to 6th and Patterson. Picked up the car and drove home. Faster than having one of the guys shuttle me which is how we used to do it. There were 9 people on the bus.

Yesterday, I rode it downtown to 2nd and Main by the Schuster Center so I could walk to Table 33 for lunch with a friend. Then rode it back. At most I waited 2 minutes at either end. Supposedly they run every 10 minutes, but I’ve seen 2 right in a row on Warren more than a few times. On the way in, there was one other person who got off shortly after I got on. On the way back, I was the only passenger.

Supposedly this is a crucial part of the UD participation in the Arcade project, but, mostly, I think it’s for shuttling people from the Premier HQ to MVH- so they don’t have to go in and out of the parking lots. CareSource hasn’t quite figured where they are going to park all the employees for their second building yet, and I wouldn’t be surprised if the old Fairgrounds ends up being a giant parking overflow with the shuttle route being slightly adjusted as that building fills up. Either that, or my neighborhood and others along the route will become the parking dumping grounds for people who work downtown who no longer want to pay for parking.

So why do I call it the White Flyer? Because the people who are using this route are mostly white, and can afford to pay, but aren’t. Whereas for the rest of the city, where the bus is ridden by poor folk and many of color, we’re not only charging $2 a ride, the tokens that were used by social service agencies and schools- are being phased out. We charge the poor folks while whitey rides for free.

If nothing else, the flyer should be collecting a quarter a ride, but even doing that has a cost and accounting factor, but, at least it’s not rubbing peoples faces in it. Of course, I’m predicting the moment DPS students figure they can ride for free, either they will start charging, put in some bogus rule about anyone under 18 having to have an escort, or ban kids all together.

Want to see public transit do what it’s supposed to do in Dayton? Make it all free and watch the utilization take off.

In the mean time, I’ll be running downtown for lunch more often. Next experiment is multi-mode, as I ride my electric scooter to the bus, and then hop off the bus and scooter the rest of the way to some of my other favorites like these two veteran owned small businesses: Texas Beef & Cattle Company on W. Third and Quincy’s on N Main (full disclosure I do work for Quincy’s).

The signs for the White Flyer are all printed on coroplast, which makes me think they have a 6 month time frame before the real routes appear. We will see how long before there are changes.

I remember this. Shame it takes so long for people to actually do something! https://www.daytondailynews.com/news/local/would-free-bus-rides-boost-dayton-economy/40cyANz0F5Rp9uqBFBOclL/

Premier now uses this service to shuttle their downtown employees from the transportation center where they park to their headquarters. They saved a ton of money by not paying the private shuttles they were running.