The Dayton Public Schools had a committee hold an illegal secret meeting to decide what schools to close. I filed a lawsuit to hold them accountable to the Sunshine laws. It got dismissed by Judge Richard Skelton on really stupid grounds: He said I failed to prove they deliberated in a meeting I wasn’t allowed to attend.

The violations were keeping me out of the meetings, refusing to allow me to video or audio record, threats to close meetings, failure to notify properly. The video above- pretty much explains it. The idea that I’m supposed to know what they did in a meeting I wasn’t allowed into is a “Catch 22” to say the least. If the court of appeals rules for the school board- they are gutting the Ohio Sunshine laws- which are already pretty weak. See ORC 121.22

If open meetings are important to you- come out and watch, and support me in my quest to protect our rights to keep our eyes and ears on those we elect.

Remember- when you elect someone, you effectively turn over your power to them to represent your interests. They work for us.

It’s already a travesty that the School Board has spent At least $35K defending themselves – to make sure their biggest critic was silenced and excluded.

Where: 2nd District Court of Appeals, Dayton, 41 N. Perry Street Downtown Dayton 45402 Judges Hall, Welbaum, Tucker. This is a rescheduled event, since Judge Froelich recused himself at the last moment in January.

Court guidelines: No knives (even tiny ones), no cameras, no recording devices, don’t use your cell phone.

Parking: best option- 5 hour meters on W. Fourth street E. of Perry and walk 2 blocks- it will cost you 50 cents or so, or park free along the Dayton Flyer bus route- take it downtown and and then walk from the Schuster stop. There is a PMI lot where WTUE used to be on the corner of 3rd and S. Wilkinson, but it’s $6 flat rate.

The oral arguments are time limited. This will end by 10:30. Most of the time, court is held in empty court rooms. Because this issue is so important, your attendance will send a message.

Since this is a Montgomery County Case, you are actually able to find the appeals briefs online (you can’t do this through the worthless 2nd district court site, only through the Montgomery County Clerk of Courts Pro site. Had this case been from one of the other counties the 2nd district “Serves” you wouldn’t be able to see any of the filings. BTW- the 2nd district still can’t accept a filing online, costing taxpayers a lot more money to pay lawyers to file in person. 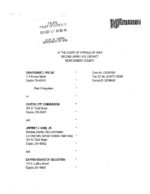 Here are the two briefs you need to review to catch up in this case.
Mine- I’m doing this pro se, (representing myself). 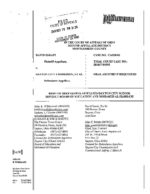 And then there is the one that cost the taxpayers a ton of money, filed by the lawyers for the Dayton Public schools. BTW- they asked for oral arguments, which is usually a sign of weakness.

Unfortunately, the PRO system doesn’t allow direct links to a case, you actually have to enter party names or a case number- and then pass a captcha to see public documents.

The court is unhappy that I’ve invited the public, and is said to have asked for security to be in attendance. They also allowed me to video record the hearing with only 1 camera (I’d requested 3, one for the judges, one for the lawyers and me, and one for a wide shot- apparently, quality is not important to them).

It’s unfortunate that they don’t understand the value of video of public meetings. The Ohio 9th district court of appeals does put up video of their oral arguments, however, the quality is so bad, you can’t really call them useful.

Thank you for your support!

…and Tuesaday evening, come to the “Raise David’s Bail Money Gala” at an Oregon District venue to be announced. Cash contributions only, business casual attire suggested…