While he said the revolution will not be televised, he nailed the last line of the song “The revolution will be live.” He didn’t foresee a broadcast studio in everybody’s pocket, he didn’t know you would no longer need a journalist to feed you news.

There will be a video of a crew of cops killing George Floyd, in Minneapolis. No bullets needed, just a knee and a badge. 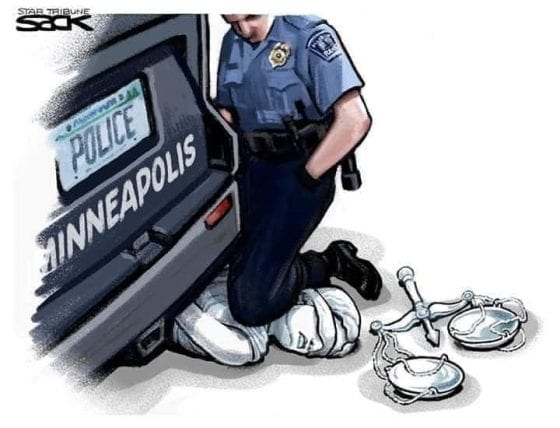 Steve Sack, editorial cartoonist for the Star Tribune, of Lady Justice being kneed to death by a cop.

There is no world where kneeling on someones neck, who is hand-cuffed is OK. Dayton’s police chief wrongly called it “a knee restraint” in a recent press conference. This is no time to legitimize a callous murder.

“Police in America are the only people who can legally kill you.” Bishop Cox at a Dayton NAACP meeting

Having a badge while having a gun, is a privilege. Police officers go through constant training and assessment. They are part of a well-regulated militia. Some call them “officers of the peace”- but…

Pivotal moments in history aren’t always known when they happen. Yes, Pearl Harbor and 9/11 were clear pivot points, but when Rosa Parks sat in the white section of the bus in Montgomery Alabama, she wasn’t the first, or the last to do it. It was doubtful that those involved in the Boston Tea Party knew that it was going to remembered in history as a pivot. George Floyd had no idea of his place in history, because, there have been countless other black Americans killed, on camera, by police, where nothing has changed.

Those days are over.

It isn’t just about cops on black crime, just as Rosa Parks wasn’t just about the seat on the bus. If you think of imagery, the knee of an empowered man on the throat of the underclass, the symbology becomes clear. George Floyd isn’t just George Floyd, he’s every minority in America, he’s every poor man that can’t afford Johnnie Cochran to twist the system to free him. America, where anyone can grow up to be president, just murdered a man over a $20 bill and a pack of smokes. Think about it.

Rosa Parks became the symbol of the American Civil Rights movement, yet, it’s leaders, Malcolm and Martin died. George Floyd never knew his name would go down in history, but it will, and the reason isn’t the long list of black men gunned down or killed by the cops before him, Amadou Diallo, Manuel Loggins Jr., Ronald Madison, Kendra James, Sean Bell, Eric Garner, Michael Brown, Alton Sterling, Laquan McDonald, Philando Castile, add in Tamir Rice and John Crawford to bring it closer to home.

You shouldn’t be able to do a Google Search to find lists of names of men murdered by police sharing the same common thread- being black in America. But you can.

And sadly, often, the badge protects the perpetrators, even when video clearly shows that being black in America is an automatic discount on your life. Need proof?

It isn’t about the money, but it is.

Being black in America means you’ll make less money, have less opportunity, and are more likely to be arrested for “driving while black” or spend time in prison for drug crimes, despite being a minority of the American population.

Studies locally, show driving while black in Oakwood increase your chance of being pulled over. The FBI and the DOJ say there’s a “Culture of Corruption” in Dayton, but only arrest and indict black people, while the white men who robbed Wright State blind, still have jobs and some even got promoted.

Former Dayton City Commissioner Joey Williams is spending a year in prison for an ill-gotten $40,000 patio- while now WSU Chief Operating Officer Greg Sample (he got promoted), spent millions of State money illegally to buy unneeded real estate by creating an illegal shell company he set up, to help future trustee Doug Fecher of WPCU buy his new HQ and sell his old one, for the benefit of Wright State benefactor Bob Mills, while also paying a vig to former US House Representative Steve Austria to do nothing at all for Wright State.

This is not a justice system. It’s a system of privilege.

Throughout history, when the gap between rich and poor, the haves and the have nots, gets big enough, destabilization is the norm.

By combining the toxic president Donald Trump, the collapse of the economy due to the corona virus pandemic, 100,000 already dead with no cure in sight, and the long standing disrespect of an entire class of people, we are seeing the start of the second American Civil War. The protests, the looting, the shooting, the rage, will set the pandemic response back as well, because protesters don’t care about social distancing while fighting for social justice.

The problem with civil wars is unlike sports, the rules and scoring system aren’t known when they start or what is considered a win, an endpoint.

It is clear that the petulant man-child in the White House is unfit for the job, and is totally willing to throw gasoline on the fire. That the Republicans in Congress refuse to see the toll it has taken and that they share liability for his actions. Will the protesters crash the gates of the White House to shoot and hang the president on a meat hook Mussolini style? Unlikely. While the fervent believers of the 2nd Amendment claim their ownership of AR-15’s is the secret to overpowering an unjust government, it’s the equivalent of bringing a John Crawford Air Rifle to battle a real Army. The White House will not burn again, nor will Trump leave his bunker in the basement. And even if he’s removed, there is no one to step up to bring this country together. Decades of privilege and corruption have left us without leaders we can believe in.

Will there be huge economic losses caused by rioting? Not even close to the losses already caused by the poorly managed pandemic, but, these losses will be visible and lasting, just as the riots in the sixties where Cleveland and Dayton burned, but, sadly, the worst damage will be done in the places the poorest people live. We will continue to see unrest until “a change is gonna come.” Unfortunately, change is one of those things that we may not know it happened, even if we’re looking at it.

Will the revolution/civil war adapt these above ideals as measure of success? It’s unlikely, but if we’re going to start shooting as the president tweeted, we may as well shoot for something.

The revolution is up to all of us to decide what the end will be. Hopefully, sooner than later, because the longer it lasts, the more we all suffer and watch it on livestream.

Humm interesting story. So what about the racial texting by 8 Montgomery County Sheriff deputy’s that never received any discipline at all. What about the black sergeant who peppered sprayed a white female inmate. That sergeant lost her job, the inmate received one of the largest payout from this county law suits ever. There was a white male sergeant who did the exact same thing to a black restraint inmate. That sergeant never received any discipline at all. That inmate didn’t make a third of what the white female received. Let’s not forget about the white deputy who had two deaths of black males to his credit. He went into retirement. Then MCSO rehired him and he is currently employed. He was also one of the 8 involved in the racist texting. Plummer did his part keeping racial tension alive and strong in Dayton. What about the Dayton officer who exchanged fire with a white male inside of a vehicle. The coroner said none of the bullets from the Officer was the bullet that killed that white male. But the male was killed by his own bullet. Humm but did you know that officer’s father works for the coroners office? Wake up Dayton your harboring racist, officers who has contributed to the global uprise we are experiencing now. And finally lets never forget the investigation by the Dayton Daily News with female inmates being segregated by some of the correction staff. They discovered beyond a doubt that the black females were being housed in the older mole infested and outdated section of the jail which was deemed illegal to house any inmates in those type of housing areas. But the white female inmates were placed in the modern, updated, pod like and dorm settings which is what all inmates should be housed in. Just saying!!!!