Unfortunately, that’s not how things work in real life. City Manager Shelley Dickstein is beyond incompetent (see Wayne Avenue Kroger fiasco for starters) , and the four sitting city commissioners have zero interest in doing their jobs.

In the meantime, small businesses are getting mixed messages. Nan has basically said that she and her husband wouldn’t be caught dead in a restaurant or eating on a patio now and she’s done everything in her power to make it difficult for those brave enough to open, to succeed:

The city also said for the time being it will not allow restaurants to use parking areas to offer open-air seating.

Mayor Whaley said she wishes people would hold off on going out to eat or drink in Dayton until at least the end of the month when Dayton Children’s Hospital expects to have public coronavirus testing in place.

Testing should start May 18, and Children’s expects to be able to do 10,500 tests per week for the region, which would make a huge difference to identify sick people and coronavirus hot spots, Whaley said.

Whaley said she believes testing should be firmly in place by May 25, at which time she should feel more comfortable about dining and drinking activities, though she still urges citizens to be careful and socially distance and avoid crowding.

Restaurant owners are scared. Their employees will be at risk, since diners can’t eat with a mask on. The virus can be expelled just by talking- and hang around for as long as 10 minutes in the air. They have to go through insane cleaning regimens to keep both diners and employees safe. Food supplies are still a bit hinky. It’s going to be almost impossible to predict volume, or diners choices, meaning food waste will be high. And, testing remains spotty and expensive and inaccurate. 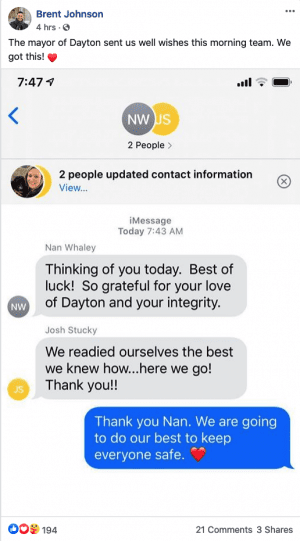 On the other hand, salons and barber shops are trying to open up. And in my FB feed, I see she’s sending well wishes to salon owners via text. And while masks can be worn by both parties when doing hair, you are in close proximity for an extended period of time. The risk is also high.

Yes these are difficult times. Yes, the decisions are hard. But, in a city that already loves to pick winners and losers in “economic development” via government support, this is not the time to show favoritism.

There will be different approaches taken by every establishment to try to comply with the safety guidelines. Some businesses have done an amazing switch over to the new reality and earned respect. From the large essential businesses- like Costco and Trader Joe’s, who’ve gone above and beyond as leaders in revamping, to small places like Ginger and Spice on Brown Street or Olive Mediterranean Grill downtown or Stoney’s Munchie Bar.

Right now, it’s ok to be scared, it’s ok to warn people, but, we’re all going to have to act like adults and try to work together and build each other up, instead of tearing away at what may be the first last chance to save their businesses.

As Cameron Mitchell, the restaurant guru of Columbus said, “I can afford to open back up once. Not twice.”

People, please, use common sense. Wear a mask. Wash your hands. Physically distance yourself as much as possible, and don’t go out if you feel even a little bit less than 100%

We’re only 4 months into this. We’ve got a lot to learn, a lot of adjustments to make, and our “leaders” need to help, not harm our efforts.

This slob of a Mayor and her snarky CM are a disgrace. Whale is obsessed w/ clutching full power and is spinning the narrative solely to that regard. She should be her grandstanding, fully visible self anywhere and everywhere that the Governor, another power slurping Napoleonic jerk, has given allowance to operate. When you get down to it, not Whale nor tiny Mike Dewine actually control the narrative. That power rests exclusively w/ the unelected boss of the state, Amy Acton.

I’m with Nan on this. I think it’s way too early to open restaurants, primarily because there are so many surfaces and people on which the virus can hitchhike. Also, the length of time patrons sit at a table just means you’re breathing recycled air for a long time. I’m also leery of hair salons, but think they’re less of an issue since, at least for men, you’re in and out in 20 min or so.

I’m not saying I’m against Nan on the safety of opening- and I won’t go out to eat, or get a haircut.
I’m just pointing out that her mixed messages aren’t helping.
She may be entitled to an opinion- but as a leader- she has to be consistent.