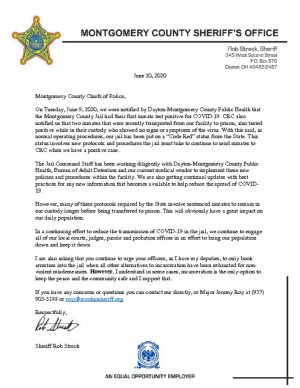 Unfortunately, the actual message that went out , despite a clear public records request. (received Jun 22, 2020 at 15:27)

Sheriff Streck who is running for his first election, unopposed, is worried that he may harm his image by letting the public know that the Montgomery County Jail is no longer taking prisoners unless they are violent/dangerous or felony charges.. He’s sent out a message asking for courts to re-examine their holds, and to try to empty things out. He’s also in total denial, taking the Trump/Pence approach- to not test everyone, every day, because knowledge is dangerous.

Now with at least 17 cells in lock down, 7 Covid-19 confirmed inmates and the corrections officer force also reporting some infections, he’s reached out to the National Guard just in case he no longer has enough healthy staff to man the jail (current staffing is already threadbare and overworked).

Of course, it will continue to get worse because jails are human petri dishes for infection.

Streck should have instituted daily testing at the first confirmed case, and immediately moved to remove the infected prisoners to a separate isolated facility. Now, the whole jail is about to become a lawsuit breeding ground. Too bad voters don’t have a choice to replace our feckless sheriff in November- but, maybe, Covid will do take care of him for us, as he may have to work in the hell-hole he helped create.

Time to look round for a different target. You may think that you have Streck stuck in the cotton candy machine. Fact is, today, on summer soltice, police may look like a soft target; but, the 80% of law abiding, tax paying, decent – average citizens .. we all respect and appreciate ALL of the police. so, root around for a different target. You may not like him or think that he’s doing a very good job. While that may be true – at this moment in time, tee up one of the other many failing leaders here in the Miami Valley. there are more than enough