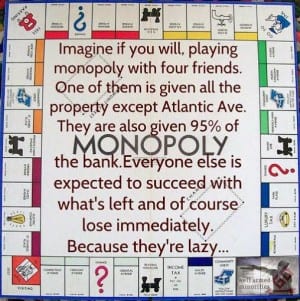 The online poker sites got shut down.

The online fantasy sports leagues have run into a bit of trouble because the only people who were winning were working with inside info.

Yet Wall Street is still going a hundred miles a minute with all kinds of convoluted “financial products” with absolutely zero oversight. Need proof? Go see “The Big Short” which makes the shenanigans understandable even to a non-finance major.

If you were starting up a company and someone offered to “invest” in it for a fraction of a second- would you consider them an “investor”- nope. Yet, this kind of wild distortion of financial markets has been allowed to exist on Wall Street for the last 40 years.

Fantasy sports leagues will be banned before 40 months are up.

The financial illiteracy of most Americans is epic. Most don’t think they have a direct connection to Wall Street since “they don’t own stock.” Yet, fail to understand that their employer may be publicly traded, their pension or retirement (if they have one) is invested, their government depends on bond ratings for public works projects, their car and health insurance are tied to the markets, and their home value is directly dependent on interest rates, lending practices and secondary markets that are being manipulated to maximize profit for a very small part of our society- by sociopaths who don’t have to fear any repercussions for their actions. After all, some of them really do deserve to pillage a billion dollars away from our collective net worth each year.

They can gamble with the world economic order with impunity- but, you can’t play poker for money. You can however play “mega-millions” and throw away your money.

This should piss you off, but since most of you feel powerless anyway- it’s just better to continue to fight the day-to-day struggle of getting through this game called life without losing your shirt, home, health or job.

When the banks were allowed to cross state lines, and begin investing with your money that they were holding for “safekeeping”, it should have been greeted with a big fat no from the public, the politicians, the regulators and even the bankers. Banking was never supposed to be risky, sexy or a license to gamble- but that’s what it’s become. Same goes for Wall Street and the tools of finance. Debt and equity in publicly traded companies used to be serious – now it’s more like a roulette wheel. Apple hasn’t changed its business model in years- yet the markets have had the valuation going up and down like a yo-yo- same goes for Google (now Alphabet) and a host of other companies. Yet, somehow, Amazon, which has barely turned a profit- is valued higher than WalMart- which has turned massive profits year-in, year-out and has real, tangible assets worth billions. Never mind the “unicorns” – darlings of Wall Street- mostly tech companies, that haven’t made their first dime, but were valued in the billions. Remember when Google was offering to buy Groupon for $6 Billion- and now…. Groupon who?

There is the old fable about the emperor’s new clothes, the one where the emperor is naked, but only a naive kid has the balls to point it out.

The reality of our entire economy is built on 4 words “In God We Trust”- which is on our money. Not, “In Government We Trust”- because then it’s too easy to point fingers- better an invisible force- because in reality- the whole system is really just a house of cards. We make it up as we go along. The value of our currency isn’t linked to anything other than what we think it is- for some, it’s how many dead presidents it takes to buy a hit of heroin, to others, it’s more like monopoly money- and how much can they amass before the game is over.

The difference is when you are playing Monopoly, there are rules- and the game ends. With our economy, the rules have all been thrown out the window, and the game isn’t supposed to end, nor is anyone supposed to say the emperor is naked.

Bad news- the emperor is naked.

Today, the New York Times reported that Mike Bloomberg is considering running as an independent for president and willing to stake $1 billion of his own money. The difference between Bloomberg and Trump is that Bloomberg has actually run for office, and governed- and he really has that kind of money. The reason he has that kind of money is because the system allowed it- and now, we’re going to see that our fabled democracy really isn’t anything but an auction for the right to run the casino.

There are a lot of people who thought this election was going to be Clinton vs. Bush. I’ve been saying it’s going to be Bernie vs. Trump, unless the Republican party brokers the convention- in which case I fully believed that Trump would continue on as a wild card independent- and split the R vote making a NY Jew our next president. I might have only been slightly off, seeing as Bloomberg is the more electable NY Jew, or at least one who can outright buy his way straight to the White House.

The reality is, Bloomberg isn’t going to fix the casino- it’s what made him.

Others say Bernie is talking about a chicken in every pot, a car in every driveway kind of idealistic dreams that won’t ever fly thanks to Congress, and they may be right.

Having four choices for president is also a wild card- as it’s never happened before. What happens when you have Bernie, Trump, Bloomberg and random Republican (insert Kasich, Cruz, Rubio or Christie). all of a sudden, the whole system gets incredibly strange- because the Electoral College doesn’t really allow for a 4-way race.

And while you may not be able to bet on fantasy sports for much longer, and you may be cut out of the windfalls of Wall Street- and online poker has to be on the down low, there is one organized betting game still left as an option- you can bet on political outcomes– and no one has shut it down- yet.

Oh, the irony of it all.

The fiat currency scheme is odd. Everybody knows government is insane, dysfunctional yet we trust our overlords to hold up the value of our currency. There once was a time when money was valuable and actually created more money. There once was a time when one had multiple investment options: precious metals, real estate, certificates of deposit, interest on savings. Today it appears Wall Street is the only place where one can invest and sort of make money. Good luck picking something that actually offers a decent return. Somehow our rulers have managed to funnel just about every investment penny towards Wall Street.

@NUGE When I read The Big Short I was amazed at how layered the deceit really was. It played on greed of the naive by Wall Street insiders that were getting away with crimes that other insiders and investors knew of, but ignored. Our, “Rulers”, were not innocent by any means, but can’t be faulted for not directing the investors greed wisely. This is a very bad cycle that we keep repeating. I remember the Savings and Loan scandal, the Enron, and now the second subprime fiasco repackaged. I don’t think we’ll ever get rid of the greed! We need to educate and prepare! IMHO!!!