The next time they run for office, you might want to consider voting for whomever is running for these judicial seats to replace the following judges: Richard Skelton in Montgomery County Common Pleas Court, Judges Jeffrey M. Welbaum, Michael T. Hall and Michael L. Tucker all of the 2nd District Court of Appeals.

Oh, that’s right, you’ll never see these judges face an opponent, thanks in part to the “Culture of Corruption” in Montgomery County where the two political parties cut a deal where Judges races are only contested when a seat has been vacated, or if you are appointed, at the end of your first term. After that, you’re in for life thanks to a backroom deal.

Note, Richard Skelton broke that “unwritten rule” when he ran against Judge Frances McGee-Cromartie, daughter of former Dayton Mayor James H. McGee, after she had survived her challenge period. His race was one of the only ones where I saw elections officials step in and try to interfere, complaining that the word “for” wasn’t big enough on his expensive large signs and made him redo them and an early postcard that was sent out.

Why you ask should these judges be sent packing? Well, while they have been protecting the legal profession and it’s strict rules and processes allowing my case against the illegal “School closing task force” the people who very obviously broke the law, and should have been at a minimum punished and at a maximum, removed from office per the infamous Open Meetings Act/Sunshine Law/ORC 121.22 the Dayton Public Schools has continued to devolve into an even bigger shit-show than it was when I was playing watchdog.

Need proof? Despite not even being looked at during the illegal bus tour, DPS is now going to close Residence Park Elementary (AKA WOW) and Dayton Boys Prep, one of the only “magnet” type schools in the system, is going to be turned into a regular old school- named “Roosevelt” disgracing the name of the once proud building that used to stand on the same lot. Yep, to all the proud “Teddy’s” that graduated from that grand building with it’s WPA art, and solid soaring, serious architecture- you will confuse future generations by being represented by a school connected to a pint sized rec center that has a pool that didn’t come close to what they tore down. (btw- the building of all these “new” schools in Dayton was a bonanza not only for the construction companies who wrote the rules- but to the demolition companies at the center of the “culture of corruption” investigation).

The reason, according to Superintendent Doktor, Herr  Elisabeth Lolli? Because “parents and staff failed to market their schools effectively and grow enrollment” (paraphrase- although the quote is out there somewhere). Excuse me? Didn’t your district not only hire the esteemed Ohlmann Group while you were a chief in the district (oh, that’s right- you weren’t even on the selection committee, but your buddy Dr. Markay Winston was) and then you hired a Fahlgren Mortine as well and the new board tried to hire their buddies who ran their campaign Burges and Burges out of Cleveland and… oh, that’s right, you hired the replacement for Marsha Bonhart (who sent an email telling school folks not to email each other because, well, I could public records search it and prove that they were violating the law against private meetings- the OMA- yes, she was THAT stupid) in December, but didn’t renew her contract less than 5 months later. Note, I recommended firing her less than a month in if you read this post. 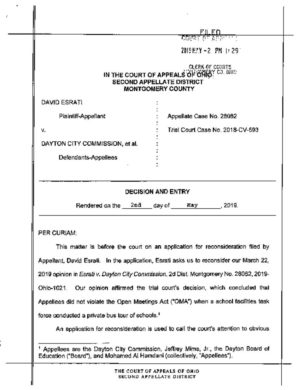 But, the dysfunction extends way past marketing or incompetence. Although the judges don’t care about that at all, all they care about is how I didn’t file my case pro-se correct enough for them and that I wasn’t willing to spend enough of my own money to protect their profession and to hire a lawyer.  They made that abundantly clear when they issued their response to my request for reconsideration on their decision to allow Skelton’s summary judgement to stand (a summary judgement is a court order ruling that no factual issues remain to be tried and therefore a cause of action or all causes of action in a complaint can be decided upon certain facts without trial.).

There are plenty of causes of action to hear this case, but the judges are dead set on helping the law firm that the school board used to use, Subashi and Wildermuth, continue to run up their bill at tax payers expense. The main issue according to the judges is my failure to prove whether people were engaged in “deliberations” while in a meeting that I wasn’t allowed either in, or to record for the record- both of which are violations of the OMA. The claim is that this was an “Information Session” – a nebulous construct of the courts that would totally circumvent the letter of the law and the more important, spirit of the law when it comes to open meetings in Ohio. For this reason, I am now forced to do one of two things- either refile the original lawsuit, being careful to name each and every participant on the task force so that I can force them into court effectively, or appeal to the Supreme Court, to finally get clarity on these so called OMA runarounds the judges think are legal: “Information sessions.” I have 45 days to file in the supreme court.

In case you are new to all of this case, you might want to watch this video we produced “Goodbye Sunshine” that clearly shows multiple violations of the law. It’s made up from hours of actual video that was never admitted into court- because, despite not being able to collect fees or compensation for my time like a lawyer in filing a case where the law states citizens are supposed to challenge their elected officials in court, I’m supposed to reach the exact same level of legal competence for free. Note, in my original filing I quoted the Sunshine Laws Handbook- item 62 of the original filing:

62. Because the law can be difficult for common citizens to apply, the State of Ohio has provided a handbook in common language expressing the intent of the law and before they jump into legalistic lingo, quote the founders of our country who used clearer language: “The liberties of a people never were, nor ever will be, secure, when rulers may be concealed from them… [T}o cover with the veil of secrecy the common routines of business, is an abomination in the eyes of every intelligent man.” Patrick Henry ~see State of Ohio Sunshine Laws Manual http://www.ohioattorneygeneral.gov/Files/Publications-Files/Publications-for-Legal/Sunshine-Law-Publications/Sunshine-Laws-Manual.aspx

and 66. “the Open Meetings Act is intended to be read broadly in favor of openness.”

And I also included the following which gets to the crux of the appeal in my original brief:

67. And while the Sunshine Laws handbook includes this nonsense statement: “In evaluating whether particular gatherings of public officials constituted “meetings,” several courts of appeals have opined that the Open Meetings Act “is intended to apply to those situations where there has been actual formal action taken; to wit, formal deliberations concerning the public business.”941 Under this analysis, those courts have determined that gatherings strictly of an investigative and information-seeking nature that do not involve actual discussion or deliberation of public business are not “meetings” for purposes of the Open Meetings Act.942” The public has no way of telling that the meeting was in compliance if it was held in secret, thereby negating any and all semblance of being open.

As to what other stupidity has gone on while this case has dawdled through the courts and Mohamed Al-Hamdani and his wrecking crew have been at work (He was the co-chair of this illegal task force) I’ll have to save for another post, but one look at staff turnover in the year of Dr. Lolli should tell you the district has somehow gone from worst to, well, worse than worse. All while the State has decided to opt out of the responsibility of fixing this mess with their former threat of district takeover.

I’ll have more posts soon, fully sharing some of the dysfunction.

Glad to see you fighting these meetings. I think that the Sunshine Laws are violated all the time, all over the State. I know of one local municipality that has 20-30 minute meetings that are televised and/or recorded, but then have “work sessions” that last a couple of hours. The Sunshine Laws state that full minutes must be created for work sessions and also states that no decisions may be made during a work session. But, this municipality will write something like “Discussed Budget” for a 3 hour meeting as the extent of their minutes. Their work session minutes also mention that “a consensus was reached” for several items. If a consensus was reached – isn’t that decision making??? They’re trying to get around it by not taking the roll to reach the consensus.

With regards to replacing the judges, I’m with you 100%! There should be term limits for local/county judges, but that will never happen. I’ve met/dealt with several local judges and none of them have been very impressive. Many of them were mediocre attorneys that had small local practices. Becoming a judge was a good way to boost their income, not have to worry about billable hours and get a state retirement. Sure beats chasing ambulances for a living! Yeah, replace ’em all!

By the way, Congrats on the “win”, David! I’m looking forward to watching you campaign over the next several months. Its sure would be good to see a couple of the incumbents unseated in November!

I think a lot of the judges need to be tossed out at the earliest opportunity. Especially the one who directly impacted my neighborhood by sending a habitual and well known drug dealer to “rehab” instead of jail on the millionth time he got caught so that he could do more free advertising for his business. You know business will pick back up when he gets done serving his time. Nothing ever changes.

[…] who needs a seeing eye dog to find dog poop) Mr. Kambitsch was on the School Closing Task force that violated the Open Meetings Act. His board-president, is the wife of another member of that “Task force” and this is just […]