I’ve been publishing Esrati.com since 2005.

So far, the only things that have generated legal issues- have all been centered around a single lawyer, the deposed Montgomery County Democratic Party Chief Dennis Lieberman (or his firm).

The next was when he called me about my post “Remembering Sandy Mendelson” the day after he died.

And today, when I was served with a “CEASE AND DESIST DEMAND DEMAND FOR IMMEDIATE REMOVAL OF DEFAMATORY MATERIAL” for posts I’ve written describing the questionable contracts steered to the Wilderness Agency by the assistant to Debbie Lieberman (he resigned in June) – Debbie is a county commissioner, and wife of Dennis.

The posts cited in the demand letter:

Wilderness did work for Debbie Lieberman’s political campaigns, held fundraisers in their office, and hired her assistant after he resigned from the county. Except, whoa, he’s listed as “Co-founder” of a firm that’s been around since 2016.

I’m making the letter available to you.


My father worked in journalism for most of his career- as a reporter and an editor. If there is one thing I know, the truth is the best defense.

But don’t take my word for it:

Truth is an absolute defense to libel claims, because one of the elements that must be proven in a defamation suit is falsity of the statement. If a statement is true, it cannot be false, and therefore, there is no prima facie case of defamation. 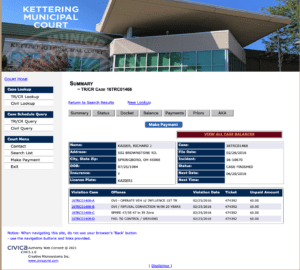 Just one of Richard J Kaiser, founder of the Wilderness Agencies DUI cases.

Richard Kaiser probably doesn’t want what I can prove in court to be proved in court. Neither does Mr. Theobald. And, neither does Mrs. Lieberman.

And as to Kaiser being a drunk- I’m not going to list ALL the public records backing up this statement, but, here’s Kettering Municipal Court, case 16TRC01468

However, this will cost money to defend. So if you value the kind of reporting I do, please consider making a donation to the “defense fund.”

There is a culture of corruption in Dayton Ohio- and it wasn’t masterminded by Joey D. Williams, Roshawn Winburn, Clayton Luckie, Brian Higgins, Joyce Cameron or her husband.

We obviously can’t count on the local prosecutor, the State Attorney General, The Ohio Ethics Commission, the FBI or the DOJ or the Dayton Daily news.

You can count on esrati.com.

Did the Supreme Court just deputize you? | Esrati

[…] Do the right thing: Get threatened with a lawsuit | Esrati on Remembering Sandy Mendelson […]

I guess that’s what happens to gadflies who spout off about things they don’t understand. I hope you get taken to the cleaners.