When you have a meeting on a Monday- nobody comes to watch your circus.

Dayton Public Schools Board of Education meets on Tuesdays at five, except when they meet on Mondays at five. They meet to conduct business on the second Tuesday of the Month- except when they have a special meeting on a Monday at the end of the month. They discuss the public business at hand, in public, except when they don’t…. oops, did they really say that tonight? Why, yes, they did. 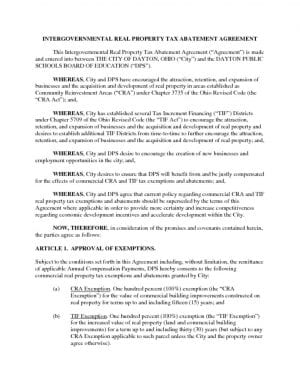 PDF of the tax abatement agreement they voted for- without knowing how it was going to work. Click to download

Ostensibly, the reason for the special meeting was that they had to approve some hiring before school started, stuff that couldn’t wait. What Dr. Lolli also stuck on the last minute agenda seemed to take board member Sheila Taylor by surprise. Board member McManus was as angry as a southern gentleman can get, telling Lolli that “he’s going to tell you one time, if I ever have something as important as this appear on an agenda without at least a phone call…” before he caved and voted yet.  The issue- a “renewal” of an agreement to cede authority on tax giveaways on commercial projects to the city. However, it wasn’t a renewal, or, maybe it was, or maybe the language had changed. After questions from Board members and a brief presentation by board attorney Jyllian Bradshaw, they still didn’t know what they were really voting for. 40 minutes of must see TV.

Taylor began with the fact that they really shouldn’t vote for a ten year agreement, since it exceeded their terms. Also, her folks in her ‘hood pay their taxes, and why shouldn’t the rich folk buying up condo’s downtown like hotcakes. And, what about a levy? 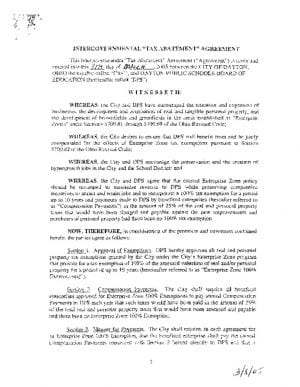 The old agreement. Why this had to be done in a special session? To hide. Click to read PDF

Harris was a condescending jerk to her, telling her she should have asked her questions before the meeting. Something that Al-Hamdani and Wick-Gagnet obviously had already done and told him how to vote (which they have to do every time a vote comes on the people who quit after the deadline- he started wrong again tonight). Taylor tried to correct him that they were supposed to do the public’s business in public- but, that seemed to fall on deaf ears. I chimed in, that they should also be voting on stuff like this when the public can speak. It’s as far as I felt like screwing with them, although you will hear me applaud Taylor for showing some integrity acknowledging the Sunshine laws.

to have my video up tomorrow- since DPS is now taking forever, if ever, to load video to YouTube. Hint: the whole world can’t access Facebook, but most in free countries can get to YouTube.

There was also a vote to renew the option with the Ohlmann Group for help in marketing the district. They haven’t used them since June of 2017- and if you need a refresher, they weren’t very happy with them. Taylor took over from former board marketing genius Adil Baguirov, now suggesting customized mailings. Hint folks- the time to do enrollment campaigns for this coming year- was back in February, not 2 weeks before school starts.

Taylor forgot she didn’t like Ohlmann- and voted yes, only McManus voted no.

Why this couldn’t wait till a normal business meeting? Because Lolli was afraid I was going to point out the way this mess happened, or their dissatisfaction, or because she wanted to stick it to me? Or, for the stated reason- because Marsha Bonhart is retiring in Oct- and they won’t have anyone left to help with their marketing. Especially after their “Digital media specialist” of the last 10 months resigned too. Of course, having an actual marketing plan wasn’t even brought up.

And lastly, Lolli shared that the upcoming test scores for DPS aren’t going to be good, thanks to the “challenging year” they had last year. We can look forward to using these scores as a baseline. Let’s see, my guess is we just moved from 607 to 608, with Trotwood making real gains to rise out of the dreaded bottom spot Dayton used to own.

Several board members tried to sugarcoat her turd of a warning with “thank you for your honesty.”

However, if they were honest, they wouldn’t be in this kind of shape with their communications – and would have had a better way to deliver the bad news. If there was ever a need for competent PR help, this was it- and Ohlmann was no where to be found. Of course, the only ad agency that goes to meetings, was the one with the low bid- and brings you videos like the one above.

Dave…I swear you recycle these stories and just change names and dates. You must have five or six DPS MS Word templates.

Mr. Whitefolks instead of trying to shit on Esrati address the issue that he brought to our attention the authority that is being ceded to the city for tax abatement on commercial properties at the expense of DPS and the students. Certainly that she at least draw a response from you other than a personal attack on the messenger.

“The issue- a “renewal” of an agreement to cede authority on tax giveaways on commercial projects to the city.”

I wonder if the secret, non-meetings at the downtown library that Lolli, Whaley, Mims, and others took part in is related to this.

I love Esrati. I was joking. It was more of a slam on DPS, not Dave. Dave’s a big boy. I think he knows I appreciate his work from previous posts. I apologize if I upset you or others. I know the cyclical circus that takes place at 115 South Ludlow. Regards. Mr. WF