How long does it take to invest in Dayton? Two years and counting if you are Nick Keyes Jr. of Key Ads.

With a myriad of city, state and federal laws to maneuver through, he’s tirelessly worked to identify a worthless parcel of land left over from the US 35 routing that was created before he was born, rezoned many times in his lifetime, and now stands to become a piece of revenue generating land for the city by the building of a modern electronic billboard.

Nick is an oddity in his business- one of the few local owners in an industry dominated by three giant companies. He’s a homegrown, all-American type guy, who does the right thing like give space to local charities because, well, it’s the right thing to do. 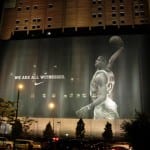 "We are all witnesses" LeBron James ad specatacular in Cleveland

He’s in a business that people love to hate. Advertising is intrusive, can be annoying, ugly and even crude- when done by amateurs (even the ones that pose like pros- see this years user generated commercials in the SuperBowl with snow globes being hurled at crotches) but it can also be beautiful, inspiring and part of the community (see the debate over the ad spectacular in Cleveland with LeBron James “We are all witnesses”). We buy DVR’s to skip TV ads, we listen to iPods to avoid the radio, we’ve stopped reading local newspapers as their news to ad ratio changed to more ads than content. The knee jerk reaction is “advertising bad, greenspace good.”

Never mind that local businesses are running out of cost effective ways to spread the word, which is one of the beautiful things about outdoor electronic billboards- they are one of the last media options that can’t be ignored- allow time sensitive, geographically relevant advertising that doesn’t cut down trees, or require huge lead time. A local pizza place can be hurting for business in a snow storm, and throw up an ad from 5pm to 6:30PM that day saying “Fresh, Hot Now” Pizza Factory 224-4477- and see a bump in business.

There will be a billboard within a hundred feet of the spot where Nick had artfully worked to put what could only be described as a work of art: a gateway board with architectural quality features and including the words “Welcome to Dayton” as a prelude to the spot where you will first see the Dayton skyline as you come West on US 35 into the city. Working with local architect Alan Scherr of ASA architecture, Nick presented a concept that was elegant, mindful of the site and the neighborhood. The competition, which will be a static old school poster owned by a carpet-bagger, had to do nothing, because his sign location happens to fall within the lines drawn on a map that make no sense (the “residential district” line falls in the middle of the Westbound lane of US 35- and ignores the fact you can’t build on the highway).

Nick offered concessions: removal of six non-conforming smaller boards in 5 different parts of the city, promised to donate a sizable proportion of his inventory on the board to local charity (including the City of Dayton- which rightfully declared they wanted no part of it- because it looks like a kickback) and entertained this kangaroo court of five local yokels who voted 3-2 against granting “3 variances/waivers” for this project to go forward.

Never mind that this sign can also be used in cases of emergency or Amber Alerts, which the static sign will not.

Please note: the investment in time, the willingness to make concessions, the requirement to prostrate ones business in front of this travesty of homegrown snootiness, in a time when most businesses are NOT investing in the city would not be a pretty sight if being done by this writer.

Nick brought a bevy of local business people to the meeting in support of his cause. Ignored.

There were citizens who spent 2+ hours in this session of comedic drama who spoke in favor of this project.

Then there were the NIMBY contingent, who in the end will lose at the next level, or in the courts (I would hope) who were saying that an electronic billboard will distract drivers and cause wrecks (of course ODOT electronic signs that are harder to read, with cheaper tech don’t do this).

Dayton, in it’s infinite wisdom, has once again shown itself to be a PITA.

While we have a City Manager form of Government that is supposed to provide for professional management of the citizens business, we have polluted it with this kind of amateur hour in the name of citizen participation. 3 people who were nominally selected (the priority board system has become an impotent circus for blowhards and diehards- with an ever increasingly insignificant mission- thanks to our declining population and net worth) chose to put another delay into a process that just shouldn’t be this hard.

Watching this travesty last night, I was embarrassed for Dayton. It’s a wonder that business even attempts to locate here. I faced the same stupidity when trying to transform a vacant boarded former corner grocery store into my “award winning” office over 19 years ago. The building which I bought for $2,200 and a promise to pay $2,400 in back taxes, had to recieve at least 4 variances to exist. People came out and tried to sabotage my plan as well, making my vision out to be a pox on the ‘hood. At one time I had to tell a city inspector to get out of my office when he came to threaten me with closing me down because a visitor to my business had parked on a public city street in front of a private home. This is the kind of BS that makes Dayton a laughing stock.

We have to do better than this. Our future depends on it.

And, as a note, Gary Leitzell, chairman of the SE Priority board and sacrificial candidate for Mayor, was one of those who got up and spoke against this plan.

You’ve read this far- do you care? One of the reasons I’m running for City Commission is that it’s time to end this kind of craziness. Of course, I must be crazy- because I’m willing to waste my valuable time sitting in on this bunk and reporting back to you. In the delivery of any product or service, it’s all the little “touchstones” that make or break a brand. It’s how they take your order at Burger King or what’s on the bag, in addition to the actual food that is being delivered. Companies that care, are tuned into the experience of the delivery of service, Dayton hasn’t a clue about this.

I hope businesses who can vouch for this like Pacchia, the 5th Street Wine and Deli, Thai 9 etc. weigh in on their past experiences in Dayton to substantiate my point. These are just 3 high profile cases where the process almost killed what has turned into success in spite of our bureaucracy.

Of course there are two sides to every story. The majority of people at this meeting liked the sign that was presented. I went on record as stating that I liked the sign and the concept. Like many, I felt that if there was any way he could locate it nearer Woodman Ave or Smithville Road he would find greater acceptance. Some people stood up in support of Key Ads. This was honorable but was not specific to the location of this particular sign. Mr. Keys has offered to remove signs in each of the Priority Board areas as a concession to installing this one. Some are actually in conforming areas and could be replaced at a later date so some of the concessions were temporary. The real issue was allowing three variances to the ordinance for one non-conforming sign. This is the first case that takes advantage of a loophole in the ordinance that has gone before a land use board. The board was tied, 2 for 2 and the chairperson had to vote in order to break the tie. He didn’t vote no right away. He weighed the issues. It was a difficult decision but in the end he felt that he had to support the residents over the business since he had received a fair amount of support against the billboard from the community. At the end of the meeting I spoke with Mr. Keys. I explained that he was up against public opinion and if he wanted this billboard he could use a different strategy. If he had a map or a picture showing what may go up within 100 feet if his permit is denied, that would have weighed in and he should present that to the zoning board at his meeting with them next week. The zoning board has final say and Mr. Keys could take his case to the courts if he chooses to. I further explained that he should put a sign like this up in a conforming area along somewhere like Route 4 or anywhere that it would be permitted first.… Read more »

I don’t dispute that Mike Weitzel, SE Land use chair wanted to call the police about me circulating a petition in a public place, BEFORE a public meeting was called.
It’s called the right to petition government, and it’s guaranteed by this document that is oft forgotten these days: the Constitution of the United States- specifically, the first Amendment. In fact, it’s such a basic right- it’s included in the Universal Declaration of Human Rights.
http://en.wikipedia.org/wiki/Right_to_petition
For those needing a refresher, I’m the one expert in the First Amendment in this city, who is not a lawyer, and will continue to fight for the rights of citizens to question their government.
That the people in the room didn’t start tipping over chairs and pouring tea down the toilets says how sheepish we’ve all become.
And for the record- I wasn’t disrupting anything, going person to person introducing myself. Weitzel was the disruption with his threat of arrest.
It’s time people knew, and exercised their rights.
The reason I didn’t write about it- is because there are other issues at stake here more important than my rights to run for Commission.

Actually it wasn’t Mike and it was when you spoke out of order somewhere near the beginning of the meeting that the statement was made. I would have jumped in if it got too complicated. Did you get a decent number of signatures? For the record, I signed Mr. Esrati’s petition. He deserves the opportunity to run.