Just after WWII, America, victorious in war yet battled by its aftermath, had to face an uncertain future just like what we are facing during the Coronavirus pandemic. Granted, the coronavirus death toll, while still climbing, hasn’t reached the 405,000 that gave the ultimate sacrifice for our country and world peace during WWII, but, there are major differences between these two battles.

In WWII the toll was mostly young men, and far away. The American public had no way to either experience it first hand, getting most of their information from heavily censored and sanitized news reels and dispatches from the front that tried to put a positive spin on the death and destruction that goes along with war. With a draft in full force, this was an equal opportunity war, where men from all walks of life were called upon, and went willingly for “god and country.” Those who died, were wounded, or just emotionally scarred were called heroes and given a well deserved welcome home.

Now, we call health care workers and front line responders heroes, as well as all those who work, at great risk to stock our grocery store shelves, deliver our food and take care of our elderly. The deaths are disproportionately older, the infirm, the unhealthy, and for the most part, concentrated where people are packed together.

In both battles, the entire country has been asked to sacrifice for the greater good. WWII in America stretched from December 7, 1941 to August 15, 1945, not quite 4 years. At the end, we saw the unleashing of the most powerful, dangerous weapon mankind had ever seen, not just once, but twice. The nuclear age had come, and the horrific concept of “mutually assured destruction” was building its foundations. There was an uncertainty.

With the coronavirus only being a reality in this country for four months, we’re already seeing the unraveling of decorum and decency. During WWII- we gave up so many things and focused as a country to win the war. We built tens of thousands of planes, tanks, guns and rationed food, gas, sacrificed for the common good.

Four months in and we’ve got people whining about their “sacrifices” because they can’t get their hair cut, or open their restaurant, or that they had to vote by mail. And the death toll keeps rising. The battle is far from won. There are people pointing fingers, running around with guns in statehouses, saying mask wearing is against their religion because they are covering up “the image of god.” There are conspiracy theories of everything from this is caused by 5G cell technology to a plan by the government to implant chips in us. Instead of heavily controlled media, we’ve got the free-for-all of the intenet, which will either allow researchers to find cures and vaccines faster than at any point in history- or will cause our fall, as citizens turn against each other over the wearing of a mask.

Which brings me to a movie that I watched last night, “The Best Years Of Our Lives” which was Samuel Goldwyn’s contribution to the cause of the reintegration of veterans to a nation that changed while they were off fighting for all of us. And while I’ve always heard about “Gone With The Wind” this movie, despite winning 8 Oscars and one of the most commercially successful films of all time, never hit my radar. While clocking in at just under three hours and being in black and white, the story, the parallels, the importance of a nations collective conscious, remain as important today as they were in 1946.

For those of you who haven’t seen it- it’s available for rental on Amazon, A brief synopsis is that three veterans meet as they are trying to make their way back to the fictional “Boone City” (which it turns out is based on Cincinnati which makes a cameo in aerial shots). Each has their own reality to return to, and their own crosses to bear. Fred, a former soda jerk, who became a captain as a bombardier  in B-17’s, who had married a bar maid before shipping out. Homer, a sports star, with the girl next door waiting for him after his stint in the Navy left him with 2 metal claws for hands, and Al, the senior, a banker who had become a Sgt First Class leading an infantry platoon in the Pacific, coming home to his wife and children.

Fred, finds his “skills” not valued, and ends up taking a huge pay cut, to work under the guy he used to supervise. Al, turns to the bottle to hide the memories of war. And Homer, feels unworthy of his girl, who he can’t hold or caress with his claws. 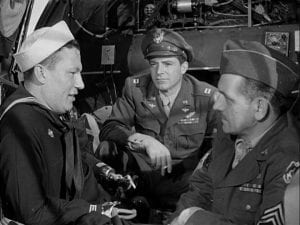 Harold Russell with hooks on left, actors on the right.

There are two parts of this movie that I can’t get out of my mind, and both relate to hand-less Homer. One is a scene where Fred, the captain turned back to a soda jerk, comes to defend Homer in the movie from someone who thinks that Homer gave up his hands for a war that didn’t matter, and the real story behind the actor that played him.

For his role as Homer Parrish, Harold Russell won the Academy Award for Best Supporting Actor in 1947. Earlier in the ceremony, he was awarded an honorary Oscar for “bringing hope and courage to his fellow veterans.” The special award had been created because the Board of Governors very much wanted to salute Russell, a non-professional actor, but assumed he had little chance for a competitive win. It was the only time in Oscar history that the Academy has awarded two Oscars for the same performance.

Turns out that in real life, Harold lost his hands when he was training paratroopers at Camp Mackall NC on June 6, 1944, D-Day, and a faulty detonator went off. I have memories of my time at Camp Mackall doing the most challenging training of my life. I learned more about myself those 30 days than any other time in my life. And the crazy thing was, Harold wasn’t even born here, he was Canadian, and came to the state after his dad died when he was 6. He joined the Army right after Pearl Harbor because he “thought of himself as a failure.” He was given a choice between prosthetic hands that would look ok but be useless, or the claws, which he could learn to use and have some control of his life. Sam Goldwyn had seen an Army film about how Harold had managed to overcome his loss of hands, and asked him to be in the movie. Harold almost turned him down.

Harold went on to be a champion for veterans, and was a part of the founding of AmVets. Later in life, he did meet a girl and married her. In 1992, he put his best supporting actor Oscar up for auction, so he could pay for his wife’s medical bills. The Academy of Motion Pictures and Sciences threw a hissy fit over this, and has rules against the sale of Oscars now, but since he’d won it before their rule, he was exempt.

And then I think, about us now. We’ve not lost our hands, and yet, we’ve got people talking about the government stealing our freedoms and liberties. We’ve not had to watch our brothers die, since the Coronavirus now has everyone dying alone, and somehow, we’ve become so callous to discount life itself, putting the economy first.

I can’t imagine this is the same America that sacrificed so much in WWII. I can’t see how a man who gave both hands to save us, had to sell his Oscar to pay for health care, the most fundamental human need. I can’t believe that we’re more interested in wealth than health, and are now willing to risk more deaths, after already surpassing the number who died in Vietnam over 20 years in just 4 months.

“The Best Years of Our Lives” has a message about the American spirit, one of optimism and faith in our ability to look out for one another. It’s a message that is as relevant today as it was in 1947. Somehow, I hope we can find that spirit and bring it back. It’s not about pointing blame, it’s about having a heart and soul that understands that there is no true liberty until we’re all safe and accounted for. That we’re measured not by how much we’re worth, but how well we take care of those who have the least, who’ve suffered the most- be they Harold Russell, who lost his hands, or those who struggle to pay their bills and put food on the table.

I salute you Harold Russell. It was an honor to walk in your shadows. Thank you for your service.