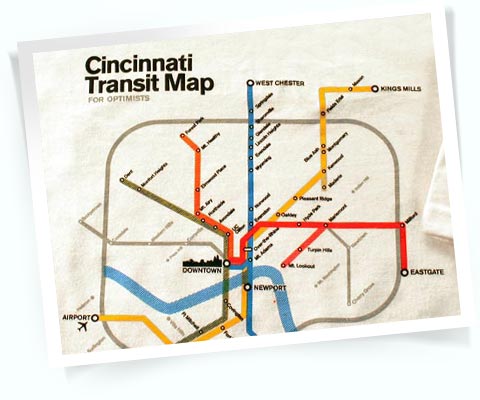 When gas hits $4 a gallon, or $5, this won’t seem like a stupid question at all.

Long ago I thought two major lines would go a long way. The West to East line would start at Westtown and the VA and head straight down Third street to WSU and then cut over to the Fairfield Commons mall. It would also have a branch from WSU to WPAFB.

The North South line was a little more complex- starting at the Airport, cutting down to what was the Salem Mall and Hara Arena, and then down to Third and Main straight shot down 48 and then over to the Dayton Mall and now then cut down to Lexis Nexis and Teradata.

We would also have two circulator routes: from UD Areana to UD up Brown past MVH to the Convention Center and then over to Sinclair, and back down Edwin C. Moses, and the other around downtown.

Of course the new high speed rail would tie in somewhere- esp. the one from Cincy to Dayton so that Sinclair can keep focused here and Warren County residents can ride up here to go to school.

Of course, someone in Cincy already has the shirt made for optimists only:

Maybe we should start with a shirt too- and get this train on track.

Don’t forget the elevated line above the median of Rt 35 that starts in Xenia and continues up Rt 49 to Clayton!

I would be happy to lead the charge for light rail from Dayton to Cincinnati. While my commute is under an hour, it would be great to be able to use that time more productively while riding the rails.

I too would like to see some form of mass transit from Cincinnati to Dayton. I have emailed Cincinnati Metro about this exact question. They replied by telling me that they have received interest in this route but the Cincinnati and Dayton transit have never worked anything out. There are so many people that travel between these two cities everyday, it just makes sense to have some form of mass transit. In fact, I work for GE Capital, we had approximately 1500 jobs from our office in Mason move and consolidate with our site in Kettering. The majority of these people now make the commute. GE Transportation has large operations in both Cincinnati and Dayton as well. Not to mention the number of people who drive up to Wright Patterson everyday. With speculation that gas could soon hit $5, $6, and even as high as $10, something needs to be done.

Dayton needs rail; we need an alternative for driving or flying. This is the perfect stimulus
plan… once you start with Cincinnati to Cleveland, then you can do Dayton to Chicago, etc.
It creates jobs, encourages tourism and entrepreneurism, and opens up more job opportunities. Dayton needs to jump on this; don’t let this opportunity for rail bypass us!

I made this in a series of Ohio Transit Maps for Optimists inspired by that above map:

Don’t know if it’s a good solution at all, since I don’t live there.

So, Esrati, is this going to actually happen?  Please!  I’d love it!

@John- I wish. We’re still thinking like a car based city with the new Austin Road Interchange. The money spent on that could have been a great start on this system.