Full disclosure, I’ve known both of these candidates for years. One has been an ass from the first day I met him, the other, a southern gentleman. I’ve done business with the latter and been treated with disrespect non-stop from the former. I’ve watched one get elected and do his best to get along with others, and I’ve watched the other suck at the Dem Party Tit as if his life depended on it. With all that said, here’s where we’re at with the juvenile attacks each campaign is tossing around. 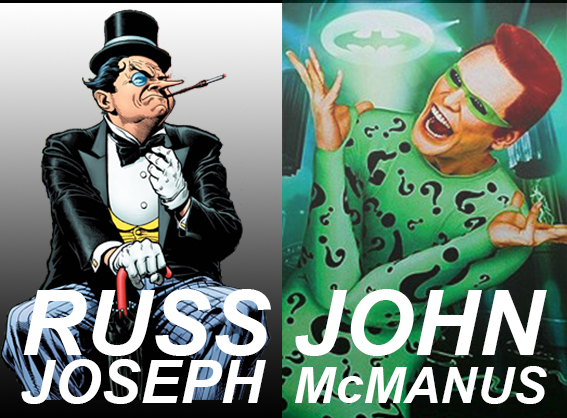 To be clear, most people go to vote for Auditor, Treasurer and Recorder and have no clear idea what each does. They know the auditor because they stick their names on all the gas pumps and scales, the treasurer for sending out tax bills and the recorder well….

In Montgomery County the two candidates running used to both be democrats, but each had a different definition of what being a democrat meant. For Russ Joseph, it’s a private family business. He got his brother Matt elected to the Dayton City Commission where Matt generally sits and smiles and collects a paycheck. Matt will serve for his entire life- and not ever lead an initiative that he came up with on his own. Russ hasn’t worked a day out of college without a party paycheck- for years, he worked for Mark Owens at the Dayton Clerk of Courts office. He aspired to be the Dayton Clerk of Courts when Mark finally retired- which will happen before the end of this term- and if Russ loses this race, he will just move back to his old job and wait. His wife, works for Karl Keith- the county Auditor, because, well, working for the party is all the Joseph family knows how to do.

For John McManus, he’s not from around here. A native Tennessean, he was born and bred into politics. Both his father and his mother have been lifers in office. John came to Dayton to go to UD Law- and ran for school board as a stepping stone to his lifetime of service. While he was a registered Dem, he worked in DC for the GW Bush White House for a stint- and also worked in the Tennessee legislature. When he ran for School Board he almost ran without party support, and used his vast network of political connections to raise money- and win (granted there were 4 people running for 3 seats – he beat Nancy Nearny for the last seat). There he got to serve with a mostly Dem Party Supported board- Ron Lee, Sheila Taylor, Joe Lacey, Robert Walker, Hazel Rountree and the one odd ball, the International Man of Mystery, Adil Baguirov who Joe Lacey takes the credit for recruiting.

This was a very dysfunctional board. They made lots of mistakes. Remember, it takes at least 4 votes to do anything, and most of the time, McManus was in the minority. Many of their decisions were made behind closed doors. Somehow, they chose Rhonda Corr over David Lawrence for Superintendent- a fatal mistake. They also hired the Ohlmann Group for almost 3x more than my bid, and then complained about the quality of the work. But, none of that compares to overlooking the fact that Baguirov didn’t live in the district- and that he also was railroading contracts that he had conflicts of interest that should have provided reason for him to abstain.

Russ Joseph has sent out mailers attacking McManus for his performance on the Dayton Public School Board- yet, that board was made up with people he chose- and then added William Harris, Karen Wick Gagnet and Mohamed Al-Hamdani- all the party chosen ones. These folks chose Harris over McManus for Board President because of the color of Harris’s skin. This is kind of pond scum that Russ Joseph runs with.


It’s this kind of immature crap that turns people off from politics in the first place. The reality is, school funding in Ohio was declared unconstitutional back in 1997 in DeRolf vs Ohio. Here we are in 2020 and because of the good-ole-boy gridlock and corruption in Ohio, we still haven’t fixed school funding- or embraced professional school management. The fact that we have 608 school districts in Ohio- some, smaller than an elementary school (Jefferson TWP schools- we’re talking about you) says that all of it has to go. We’ll never know who argued for Rhonda Coor, or for Libbie Lolli behind the closed doors of executive session, but, we do know the outcomes had to be by at least a 4-3 vote. McManus can’t be held accountable.

McManus raged against Joseph’s approving of a major expenditure run through the county by Mrs. Russ Joseph. Normally, this wouldn’t happen- or at least someone with integrity would abstain from voting- but, Russ feels he is better than everyone else, so the rules don’t apply to him. This is totally within his character. McManus was always the one on the DPS board to correctly count votes, to advise on how to properly abstain etc. He showed for four years he recognizes and respects not only Robert’s Rules of Order, but his fellow board members and the citizens who came to speak.

I’ve started an organization, Reconstructing Dayton, a 501(c)(4), to try to help educate voters and find and endorse candidates who pledge to work toward regionalism and cutting our high tax burden caused by having so many banana republics in one county. We sent questionnaires to all candidates- along with opportunities to be interviewed. So far, we’ve had Bob Matthew’s candidate for County Commissioner, Zach Dickerson, candidate for County Clerk of Courts and John McManus- running for Treasurer. Others- including Russ Joseph, chose to blow the questionnaire off.

Here’s an 82 minute interview with McManus- where he explains why he left the Dem Party- and why he’s running for Treasurer as well as his views on regionalism. We’ll have a post up about this interview.

McManus is cut from a very different kind of cloth than most of our local politicians. Maybe, it’s because he’s more experienced and has worked in different political pools than our local ones, who’ve only swam in our own local cesspool. Often times, he gives evasive answers, or tries to answer in the Southern Gentleman’s vernacular, one where a smile is almost more important than the words. It’s not always clear what his answer is, but, it’s probably because he wants to test the water before jumping in. With Russ- you’re straight to pig wrestling in the mud if your views or opinions don’t involve kissing his ring.

This is an election where D or R really doesn’t matter. You don’t have to be an actual numbers guy to run the shop, or have any actual qualifications to do the job. When it comes down to who actually cares about doing what’s right for the county and the general public, there is really only one choice- McManus.

Don’t worry about what happens to Russ if he loses, he’s always got a fallback job with the Monarchy- and I’m sure he’ll be appointed to finish someone elses term soon enough.

I’ve already voted for McManus and hope to God he wins. The only way to reclaim Montgomery Countyis to get rid of all of these inbred, entrenched Dem party bastards. That fact that McManus is “not from here” speaks volumes. If I knew nothing more about the candidate than that, he would have earned my vote!