Before this school board was elected, I warned the citizens of Dayton that William Harris was a mistake:

Harris has said “I won’t be anyone’s puppet” as part of the slate- yet, that’s comically what he is. I don’t think he brings any of the critical thinking skills we need to this board, nor do I think he has the intellectual horsepower to move the district forward at a critical time. He’s Ron Lee 2. Pass, please.

I also said it was time for Joe Lacey to go. Luckily, the voters agreed, and Joe wasn’t re-elected. Unbelievably, Harris makes me forlorn for Lacey.

On my non-recommended list, was the political climber Mohamed Al-Hamdani:

This guy has political aspiration signs coming out of every side of him- in neon, with strobe lights. This board run is his first step to his long future political career. And, he’s arrogant, by the truckload. Early on, I asked a question about the hiring of Burges and Burges and how much it cost- and why they didn’t buy local talent- and he tried to sidestep it and said they hadn’t paid them a dime. I don’t need to be lied to ever, and especially before you have been elected.

Mohamed thinks he knows it all. He has a smugness that rubs people the wrong way. He thinks he has all the answers. He probably reminds people of me in some ways- but, with the establishment nod. His campaign rhetoric has been full of bullshit about all the teachers that taught him- and his story of coming to America- all nice and fine, but missing any substance. He may indeed have all the answers, but, I’ve not heard them, and his testiness will bring back some of the rancor to the board that we can’t afford. He has a law degree- which would and might be handy, but, so does McManus- and it hasn’t kept us out of trouble. One of the biggest mistakes Americans make at the polls is thinking that being a lawyer makes you a good lawmaker- and that’s actually the opposite. Good lawmakers and only the best lawyers, understand that their profession is actually the art of compromise. Too many think it’s to win at all costs. Mohamed is a total wildcard. He may be smart, he may have a good story, he may even understand the issues, but I’d put Mario and Jocelyn ahead of him for my slate. He’s also been the one to say that if “The slate” is elected, they won’t disagree with each other as much in public- lending me to believe he’s planning on operating behind a curtain.

So far, my predictions have been totally proven correct. Al-Hamdani, started with trying to have secret illegal meetings of the School Closing Task force before he was even sworn in- leading to my lawsuit against the district over the Open Meetings Act.

But, last month, when I decided to push my speech over the 3 minute limit- after Harris had let a whole bunch of people speak for well over 5 and as long as 10 minutes in the June Meeting- I mentioned that maybe, Harris practiced discrimination- since he doesn’t interrupt African American speakers- and referenced Sheila Taylor’s  nomination of him for board president as a rookie- because he was “African American.” You can watch my video: A racist on the Dayton Public Schools Board of Education 2017.

Al-Hamdani, Wick-Gagnet, Jocelyn Rhynard, John McManus, Robert Walker and William Harris were all sitting there- and didn’t say a thing then- but, when I bring it up, Al-Hamdani, the pious one, wants to make me out as a racist for reminding them how Harris got to the center seat.

“So I want to apologize to you on behalf of this community, to insinuate that your only qualification was your color, um was interesting to hear, um there’s people, as a community, we’re better than that sir, so I’m sorry that we had to hear that today, but that’s the world we live in today” ~ Mohamed Al-Hamdani

When I tried to go up with my camera to question Al-Hamdani after the meeting- the security forces played bouncer. You can watch the entire meeting here.

Word has gotten back to me, that someone is telling people that I said the “N” word. Nothing farther from the truth.
What you need to watch is how smug Al-Hamdani is as he plays this out. Note also- if you watch the DPS video feed of this meeting- you’ll never hear my outburst.
It’s sad that this is the best we can do for a school board. They all need to be removed. All of them, suffer from amnesia apparently, totally forgetting how they followed Sheila Taylor’s racist rationale for picking Harris as board president. 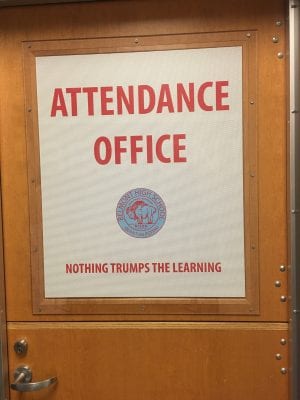 And, while we’re at it. As part of his campaign trail story, Al-Hamdani liked to talk of his path to success as a poor immigrant child coming to America, not speaking English- and how he owes all his success to his DPS teachers and their acceptance of him.

A source has sent me a photo of new signs in Belmont High School “Nothing trumps the learning”- the DPS school where most of the immigrants are, a sign that has many of the international parents terrified. This is, after all, the country where children are now separated from their parents in deportation camps, thanks to President Trump.

A final note: Al-Hamdani, right after getting elected to the school board, was handed a high-paying patronage job in the Montgomery County Clerk of Courts office by his Democratic Party buddy Russ Joseph, who was just appointed to be the clerk when Greg Brush left town.

Vote for the Penguin or the Riddler? Montgomery County Treasurer race is full of name calling | Esrati

[…] and then added William Harris, Karen Wick Gagnet and Mohamed Al-Hamdani- all the party chosen ones. These folks chose Harris over McManus for Board President because of the color of Harris’s ski… This is kind of pond scum that Russ Joseph runs […]