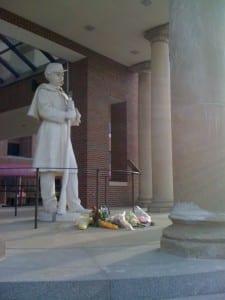 Friday morning was a little harder than most. Writing this post has taken 2 days, and I’m still not sure what to say. The Dayton Daily News closed comments- yet asked strangers to send condolences.

Condolences don’t cut it. Neither did the headline of the DDN’s other story: Did war vet kill self to make a statement?

I don’t think a newspaper copy editor can write a more presumptuous headline.

The paper also says that Jesse Charles Huff didn’t leave a suicide note- but then again:

via Veteran commits suicide in front of Dayton VA center.

Might his note have been in the backpack? Maybe. But, I think that anytime someone shoots them self a note isn’t the most important part of the deed.

Jesse Charles Huff is just one of our veterans who’ve been fighting in a war that the American people take for granted. We fight because we are protecting “democracy.” Yet, as if it is a self-fulfilling prophecy, the democracy we had pre-war is not the same we have now. The men and women we send over to do our “business” come back to find a country that’s falling apart at the seams. 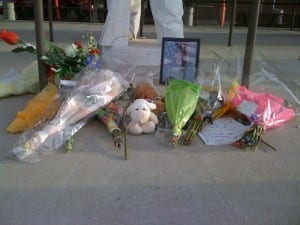 Closeup of tribute to Jesse Huff

Foreclosures, bankruptcies, record unemployment, under-employment, a “health-insurance debate” and billions spent propping up the Wall Street Casino- while our homes and hometowns slip into worthlessness. All while the beltway bandits keep the military industrial complex working at full steam- and the banking industry is thinking up new ways to siphon off your wealth with bets on when you can’t pay anymore.

Yep, Jesse came home from one war, to another- and we need a suicide note? It would seem that to even the most casual observer that things aren’t ok in America today. Why should we expect Jesse or Joe Stack to write the note to us- when most of us are giving tacit approval to the travesty of the war- both abroad and at home. Less than half of us vote. Those that do are as mesmerized by the distractions as an audience at a magic show. We’re fixated on things like abortion, guns, taxes, health insurance, while the class war continues to devastate our country.

Need an indication- drive around the area you need to drive through to get to the VA- as Jesse did on Friday. We’ve given up on parts of this country- in a way we refuse to give up in Iraq and Afghanistan.

Greg and I recorded a video about what we could do- and Greg brought up an old Drexel Dave idea to give houses to veterans for free- instead of tearing them down. I don’t know that giving a home that others don’t want to a veteran is a real gift. But, what I do know is that we need to provide a safe and secure environment everywhere in Dayton- and one of the ways to do that is to re-occupy the homes that we’ve turned over to father entropy, and to tell the thugs that there is a new sheriff in town. Turning an entire neighborhood over to a group of veterans, who are paid to provide security within the neighborhood, even if it means “peace through superior firepower” and letting them openly carry the same weapons they did in Iraq- so be it. I think there can be real pride in taking back OUR country from the thieves, punks and junkies, as opposed to making sure the oil flows for Exxon in Iraq.

We’re coming up on a year anniversary of a murder that still doesn’t sit well with me. I think it’s time that we start looking to provide the same security to our own citizens that we’ve been expecting people like Jesse Huff to provide overseas. As long as Americans are getting shot and killed here, we’re failing our most basic promise to our citizens- the one that talks about “life, liberty and the pursuit of happiness.”

If you enjoyed reading true breaking news, instead of broken news from the major media in Dayton, make sure you subscribe to this site for an email every time I post. If you wish to support this blog and independent journalism in Dayton, consider donating. All of the effort that goes into writing posts and creating videos comes directly out of my pocket, so any amount helps! Please also subscribe to the Youtube channel for notifications of every video we launch – including the livestreams.
Subscribe
10 Comments
Inline Feedbacks
View all comments

I was also stunned and saddened by the suicide of Jesse Huff. One reason why I am running for State Representative is to be an advocate for veterans in Dayton and elsewhere in Ohio. More should be done to honor and help all veterans especially those who have returned from Iraq and Afghanistan.

Bringing them home from disastrous illegal wars would be a good first step.

What this country needs is another WAR or the DRAFT. Make the Draft or another War a fact, and you’ll see these Oil Wars stop. Get rid of Lobbiest, get rid of the Crud that is in office, and fill the ranks with people that are not as greedy. Inforce the laws we already have, and rewrite some laws that will bring the big facories back to the U. S. of A. If you don’t put anything into the Social Security program, you don’t get anything out. My list goes on and on…
wake up Amerkia, you have nothing to loose but your chains.

The Dayton Daily News has a bit more in today’s paper- and I added 2 pictures to the post that I took this morning at the VA at the makeshift memorial to Jesse.

Jesse Huff … received an honorable discharge from the Army in 2007. An infantryman who had been promoted to the rank of specialist, he had been seriously injured during his deployment to Mosul, Iraq, from 2005 to 2007. He served with Bravo Company, 1-17 Infantry Regiment, 172 Brigade based in Fort Wainwright, Alaska.

via Brother not discussing details of suicide much.

A troubled vet commits suicide in a most dramatic and public way, and the comments on Esrati.com range from Marxist polemic to shameless self promotion. What Drexel Dave seems to forget is that vets, who as young and male fit the highest profile group for suicide, also end their own lives in times of peace and during wars all consider just and legal……

The DDN finally gave us a picture of who Jesse Huff was: http://www.daytondailynews.com/news/dayton-news/vet-who-committed-suicide-fought-depression-ptsd-670745.html

What Drexel Dave seems to forget is that vets, who as young and male fit the highest profile group for suicide…

While that may be true, we shouldn’t stick our heads in the sand, there is a problem:

…young veterans in their early 20’s were killing themselves at an unusually high rate back in late 2007. Using never-before-seen 2004 and 2005 data, CBS News discovered that the rate of suicide among young veterans was an estimated two to four times higher than any other age group.

The new preliminary data released by the Department of Veterans Affairs shows the suicide rate went up 26 percent from 2005 to 2007. It’s assumed that most of the veterans in this age group served in Iraq or Afghanistan.

If there is a bright spot in the data, it’s that in 2007 veterans in the group who used VA health care were less likely to commit suicide than those who did not. That’s a change from 2005.

The military in recent years has struggled as well with an increase in suicides, with the Army seeing a record number last year.
Suicide Rate of Young Veterans Soars

When we mix and confuse the justice of a war with just conduct in the war, and use these unfortunate events to make political hay it makes it harder for kids like Jesse to “find a place in this world” and get the help they need.

Hmm I wonder who will be our future drug dealers…. disenfranchised military vets with knowledge of country and supply lines.  If I remember correctly there was plenty of HASH and Heroin when old Ronnie was in charge of the USA in the early 80’s.  Nothing like drugs to finance both sides of operation.  Now that the good ole freedom loving USA realizes that it cannot afford to incarcerate drug offenders and educate children at the same time, I wonder when we will stop the madness.
I guess we are going to celebrate Ronnie by putting him on the Fifty.  Hell yes I say everyone knows 50 will get plenty of Ronnies legacy (coke, hash or heroin) so they can forget Ronnies legacy.  I love the irony!

Chiarelli says one of the most important influences on a soldier’s mental health is the cycle of repeated deployments to a war zone. Those erode a soldier’s bonds with family.
“The number one thing we can do is to expand the amount of time all soldiers … spend at home,” Chiarelli said.
Army General is point man on Pentagon’s push to improve soldiers’ welfare

As far as whether there is a problem or not, Secretary Gates doesn’t seem to need any more convincing:

The Pentagon official in charge of the wounded warrior program said Sunday he has been forced to resign, as the military continues to struggle with how best to care for troops injured in combat.
[…]
Nearly nine years of war, in Afghanistan and Iraq, has physically, mentally and emotionally battered the military, sending thousands home with severe injuries and spawning spikes in suicides and post-traumatic stress issues.