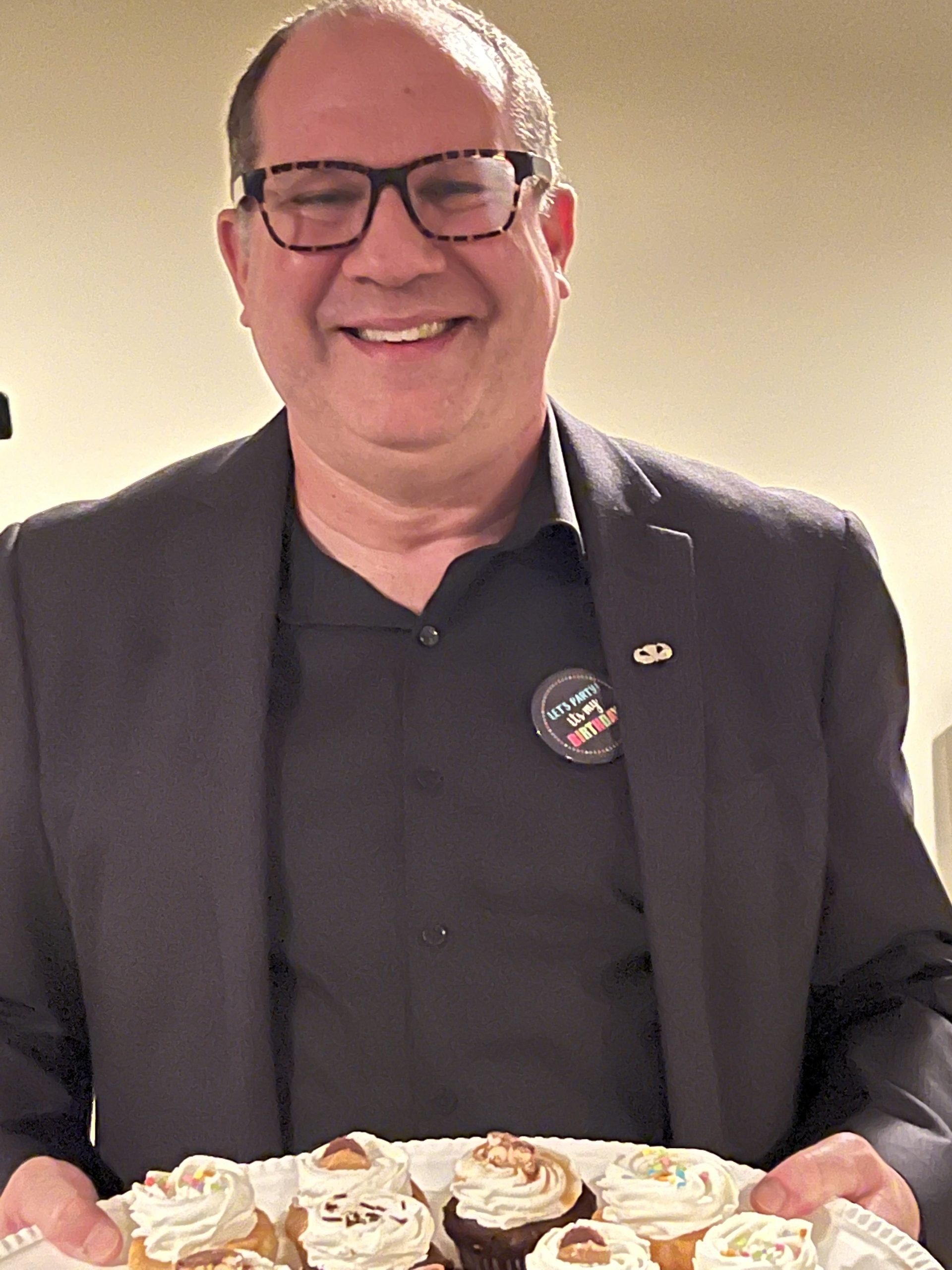 On Wednesday night I held a fundraiser/birthday party at Coco’s Bistro. It was a small gathering, and I felt somewhat guilty asking friends to pony up $125 a plate. I paid my friend, fellow veteran, sometimes client, David Cousino to play music. I brought in delicious cupcakes from sometimes client Twist Cupcakery.

The food was amazing, I talked a bit, and I let my guests tell the others how they know me, and what they think of my run for office. I made a video for myself- (for when I get old- to remember the night) and to share with a few folks who couldn’t be there.

The next day on Facebook- David Buccalo wrote the nicest thing about me:

Happy 60th Birthday Esrati. Like Cher, Madonna, tough guy Stallone he can easily function with just one name. His life defines him. His name is his brand. Tough. Relentless. Disciplined. Tireless. Sharp. Quick witted. Stubborn. Most of all defined by loyalty of love to his parents, even now and his duty to the greater community that he calls home. He is the Dayton version of Detroit’s Michael Moore. He does more than just walk the talk. He is the talk. Looks out for what is not right in our world he calls it to account and has little tolerance for nonsense. He’s definitely not a Republican and the Democrats are not sure what to do with him as he shows no partisan favor. He is the stuff of that greatest of American characteristics, he is an independent thinker. He is a dreamer in a world where we like the concept about dreamers but rarely encourage them in real life.
That is what I should have said.
Happy birthday to the 60 year old birthday boy. He fights the impossible fight and gets back up to do it again. He does not know what it is to be knocked down. He only knows what it is to stand up. As the song says, “You don’t stand on Superman’s Cape.”
Next year he will be fighting the fight for right and he will be 61. The question is not what he will do in his next year. The question is what will you do with your next year.

This is after the Ohio Democratic Party refused to acknowledge that I won a democratic primary to be their candidate to take on Mike Turner. In their hack job letter, they accuse me of:

We have also received multiple credible accounts of past conduct on your part that would make us hesitant to do so, such as harassing Democratic candidates, elected officials, and leaders; supporting Republicans; and using inflammatory and offensive language.

Does the Democratic Party care about winning elections?

To be attacked by your own party, attacked by trolls on Facebook, while watching your opponent being given more than his 15 minutes of fame defending Trump for his theft, deception, and treasonous theft of classified documents is enough to make you disgusted with the process, before you also think about that what you raised at that one fundraiser doesn’t even equal the donations from a single one of the 19 billionaires that have backed Turner.

It’s odd that despite Turner’s recent star turn as Trumps defender in chief, not a single major news outlet has contacted me for a response, or given me a mention. So much for “equal time rule.” You’d think that even a single Democratic PAC would key in on this- and offer a modicum of support? Nada. To date, the only PAC backing me is the one run by Senator Sherrod Brown- which kindly sent $2500 to every Ohio Dem running, regardless of the parties stance.

In the mean time, Turner’s been mailing postcards with his free mail frank, and I can’t get an answer from the Ohio Democratic Party or the DCCC, if they will avail me of the rights of discounted postage allowed “political parties” but not candidates by themselves (something that needs fixing if we ever hope to see other parties form in this country).

I’ve been working a minimum of 12 hour days, sometimes more, every day, including weekends since winning the primary. I’m trying to do things to differentiate myself from Turner- who has never had a town hall in 20 years – so I’ve been doing daily (M-F) livestream townhalls on Youtube and simulcasting them to Facebook at 4PM est. www.tinyurl.com/esratilive The idea is to engage folks, increase the amount of content about positions and to build an audience- and then to continue doing it once elected- so everyone can find out what their congressman did for them each day. It’s a rather novel approach to using technology for outreach- but, I’m probably 5 years ahead of everyone else. I’d have thought a mainstream news outlet would have mentioned it- but, no, my first national press comes from the right wing rag that gave the world the Fusion GPS BS. Apparently, their fresh out of writing about TTUN minor sports, “assistant editor” watched my livestream one day and wrote a hack job story (nothing researched, no background, just a regurgitation of carefully chosen content) about my livestream talking about how Congress shouldn’t be allowed to trade stocks.

He even has the wrong image- and video posted with his “story“. Which is all about how I’m so busy distancing myself from Joe Biden- just like Tim Ryan. Hardly the subject.

If you are wondering what the real position was- it’s not that far out there, it’s been on the House floor for a while- banning members of Congress from trading stocks while they can make changes that wildly impact specific companies. S.3494 – Ban Congressional Stock Trading Act which was introduced in the Senate after the House failed to move even though supposedly, Nancy Pelosi greenlighted it.

This “associate editor” was reporting on my response to a question posed during the livestream by my longtime Republican friend Mark K. who was asking about kickbacks and how Hunter Biden made insane money despite zero qualifications. Somehow, this becomes the entire topic of the story.

No news outlet has picked up the fact that 80% of Turner’s money is from out of state- or that 19 billionaires have backed him. Politico hasn’t taken the tip that he’s spent $35K on “Food and Beverage” just in this reporting cycle- when it was “news” to them 2 years ago, when he spent twice that much over a few years.
It seems that until you raise half-a-million, nothing you do is worthy of coverage, unless it’s something illegal or irrepressible. Unfortunately, I’m too busy to shoot someone, hire a hooker or get caught on tape talking political kickbacks in exchange for city contracts (oh, yeah, that’s the hallpass to run for political office despite having committed a felony in office that the FBI gave to Joey D. Williams- with an agreement to resign if re-elected).

Since I’ve been denied access to the Party database and tools- I’ve gone the AOC route and adopted a tech startup Reach.vote’s tools to help my supporters connect with their friends and spread the word. If you want to help out- go to https://app.reach.vote/campaigns/elect-esrati-for-oh-10 and sign up. You’ll download the app, load your contacts in and match them to voter records, and then start working your friends to support the campaign- and get them to come on board.

The app is gamified, and if you contact enough voters, send enough messages- you could win a t-shirt, a signed framed (by Custom Frame Services) Shepard Fairey print and my undying thanks.

Please also sign up for the weekly campaign email at www.electesrati.com/subscribe.

This week, I have a tele-conference on my lawsuit against the Montgomery County Board of Elections concerning their inadequate agendas and public records policies, and we start seeing more candidates events.

If you’d like to donate to the campaign– or just buy a t-shirt or print to contribute to the campaign, follow the links. The new “Defund Politicians” shirts should be ready by weeks end. In the meantime- I’ll continue to be the same voice of the worker, the downtrodden, the under-represented, the ignored, the righteous fighter of transparency, the activist, the ad guy, the big brother, the caretaker of veterans, I’ve always been.
Thanks for reading.