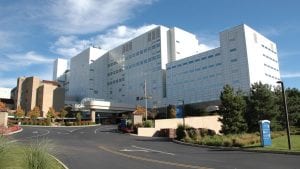 Nan Whaley plays the victim, but never had a problem accepting money for her campaign from Premier employees. She never had a problem asking them to help pay to raise the city income tax either. And now, she wonders why they are going to close Good Sam, as they build out other beds in other parts of the county.

Not that saving .25% in income tax is the driver, it’s safety. No female nurses or doctors want to drive up Salem Avenue in the middle of the night. Past the AM PM Market where gunshots are frequent.

But here’s the deal, there is nothing the city, the NAACP, the ministers or even god himself can do to keep Premier operating on that site, and frankly, people should say thanks- and good riddance.

What the city can and should do, is tell Premier that you can’t trash the facility, you can’t tear it down, until it’s been on the market for two years. Just like what happens when we close a school building. At that time, any other health care system that wants to come into the market, should have the opportunity to buy the building that Premier has never paid a dime of property tax on, and open up as competition to the duopoly of Premier and Kettering Health Network.

We should be asking The James in Columbus if they want to come to Dayton, or the Cleveland Clinic, or UC Health, or a group of private doctors who want to band together to open their own facility- one where the CEO doesn’t pay herself $4 million a year, and sit on the board of CareSource, her largest client, and set the salary of their CEO at $3 million a year.

In fact, what needs to happen is we need to stop allowing companies to claim they are non-profit or serving the public good- and being allowed to skip paying for police and fire, and roads and water, etc- while paying CEO’s astronomical salaries. If you make more than 5x your average payroll, you can’t claim to be tax exempt or non-profit. It’s time that the taxpayers stop subsidizing the CEO class.

Another test would be if you receive more than 35% of your revenue from government, pay caps are in place. No one makes more than the President (current salary is $400K a year). If you can’t live on $1000 a day in Dayton Ohio, you shouldn’t be claiming non-profit status.

Any company that hires it’s own private police force should be charged a fee, equal to the officers pay, that goes to pay an extra Dayton cop. That would be called a “licensing fee” for providing a duplicative service to a public one. The reason we don’t have independent fire departments got figured out long ago, there is no legitimate reason for private cops- just like there is none for “contractors” who are really mercenaries in war zones. Sorry, you want to be a cop- work for the government, with proper oversight.

I’m pretty sure that if Good Sam was put on the market, we’d have a third option for health care in Dayton- and that it would start a price war that would benefit us all.

Who will work there then, because according to you, the issue is “…safety. No female nurses or doctors want to drive up Salem Avenue in the middle of the night.”

This is the kind of story that should be on the front page, above the fold, in the daily newspaper. But it won’t for all the reasons previously .visited. It has always amazed me how the Miami Valley has placed some of the least qualified women in places of power that should by all rights require highly intelligent, hard working and well-trained individuals. I could name them all, but will focus on The Whale Nan and MB, millionaire CEO at Premier. MB got her nursing degree from a lackluster school and rose to prominence thru the interconnections known only to Daytonites that are promoted up the ladder of success without doing any of the heavy lifting that accompanies such elevation. It must take a secret handshake to get into this club. Because these 2 did not go thru the usual machinations the rest of us have had to do, they have no perception of how things are and show no empathy to those they leave in their wake. Witness the disaster that has become the City of Dayton and the soon to be disaster of an empty hospital in a town with too many opiate overdoses and poor who still can’t get care. This is leadership at it’s worst.

@Hall- remember the part about the taxing of the private cops to pay for the real ones? By the time Premier, Kettering, Sinclair, Metroparks, UD, etc- pay for their private police forces- we’d have another 100 cops on the street- protecting all of us- not just the rich.