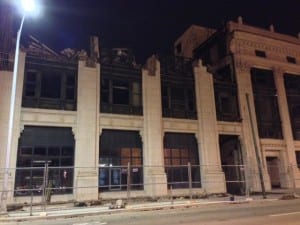 The day after demolition was allowed to continue

There is zero accountability in city hall. The demolition of the rear section of the Dayton Daily News building, despite it clearly being slated for saving by Landmarks, clears the way for the demolition of every other historic building in Dayton.

City staff failed to notice that facade preservation was not written on demolition permits obtained by Rauch, said Aaron Sorrell, director of planning and community development for the city. He said Students Suites officials knew it was to be preserved, but had asked for the city to consider allowing it to be cut down with only the bottom third remaining as a decorative wall. That proposal had not yet gone before the Landmarks Commission.

And while there was a small whimper from the community about the loss of this building, no one misses the Schwind- except maybe former patrons of the Embassy lounge. The terracotta detailing on it wasn’t quite as ornate as others in the area, but it was a building with zero structural defects and prime for a rehab. Two previous local developers were both denied tax re-appraisals and any funding for their plans to turn it into housing. When the Dayton Daily building had two reductions in tax valuation since the DDN abandoned it:

via Time to fire the “community development” manager.

Were tax values decreased for Cox in exchange for the lump sum donation of half a million dollars to “River Run” the paddle boat course on the river, and a pledge for money to go toward this demolition (typically, government money can’t be used to tear down property that’s protected by preservation laws).

Why demolition even began before the deed on the Schwind building had been cleared is also worthy of investigation. Should the deed restrictions hold, this project may never come to fruition, leaving us with an empty hole on a streetscape and half of the historically significant part of the Dayton Daily News building. Was the rush to complete a deal that funneled money into the most expensive political race on record? Demolition contractor Steve Rauch has been a large donor in the past to the Democratic machine.

Considering that the laws that have protected historic districts have been part of the formula that has given Dayton its only successful neighborhoods based on property and tax value increases over the last 30 years (that are in areas served by Dayton Public Schools) does this mark the end of preservation in Dayton? For a city that had no problem hauling me into court in 1986 for putting up the “wrong kind of garage doors” on a non-historic structure- facing an alley, who is going to take responsibility for the demolition of a landmark?

Hey there David…wouldn’t it be great if our current Mayor would put up the biggest witch hunt in Dayton and get to the bottom this travesty? It is only one of many losses to our community.
And on another topic…what about the blue die being purchased initially for $11k. The reasoning is interesting…but weak. Do other communities color their salt so that truck drivers know which streets have plowed? Oh and so that residents won’t call City Hall asking about plowing their streets??? WOW, where are we headed?

@Jenet- I’m sure Nan would have preferred “Whaley Red” for the dye- but- it would have made it look like a blood bath. I’m not overly upset about the dye- it does help the street maintenance guys know what’s been done- not done.
Our current mayor may or may not give us somethings to consider soon- we’ll see.

Dayton officials, elected and administration, have zero respect for any legal processes designed to sort out and decide public interests, and haven’t for a long time.  This includes formalities like deeds, due process,  commission decisions, accepted hiring practices – even (especially) their own Charter, which they regard as something to be ignored or skirted (who has standing to complain?)  The ends always justifies the means to them, and guess who decides what ends (and whose) are to be served?

I wonder if the color choice of the road salt is blue to indicate that Dayton is controlled by the Democrats? Or is it blue to acknowledge the economic “blues” that Dayton is experiencing? Perhaps the color blue references the way dissenting voices are asphyxiated in the local media? Maybe it has something to do with the Smurfs?
———
This is my first attempt at starting a conspiracy theory.

David: You had garage doors facing an alley, and I had a window that was as well facing an alley, only difference being my wife and I had to pay a lawyer $3,200.00 dollars to keep our window. All we was trying to do was increase the value of our home and neighborhood, not tear down and destroy a historical treasure. The Landmarks Commission is nothing but a joke, oh I forgot to mention that when our lawyer asked to come down and view the TV transcript of our hearing,  and was informed that they had lost it. May the Landmarks Commission get the mange and a lasting case of diarrhea.

A negative alternative to not using the dye (never heard of it before and only know the details posted above) is that some streets can get salt applied 2x, 3x, or more.

Regarding what Gary may say, I know he’s said he’s got stories, but he should be careful if he’s really planning to run for county commission. Now, if it’s about exposing corruption and other truly harmful things, he could actually use it as a campaign point.

Who cares about the Dayton Daily News. They have been culpable in the demise of Dayton and their stain should erased from downtown. Life is too short to change the glaringly stupid. Move to Denver, where the obese get enough exercise and blood flow to be thin and intelligent. Food Carts, bike sharing, music…..

The city says the plan was to keep the facade on the historic Dayton Daily News building.

[…] I’d like to start dumping stinky bio-waste next door to you. I’m the guy who mistakenly demolishes landmark buildings on city contracts. I’ve donated lots of money to elect dunderheads to lead your city into the ground- which has […]