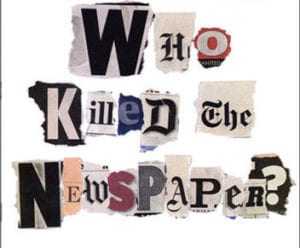 The “newspaper” that shows up on a very few doorsteps tomorrow morning will have come to you from Indianapolis. The deadline for this cost saving measure is now 5pm. They started testing this 2 weeks ago, so when I saw the Dragon’s lose their last game of the playoffs on a Sunday night- I got to read about it in Tuesdays paper.

The old saying, “never argue with anyone who buys ink by the barrel” no longer holds in Dayton, since the Cox sisters are too cheap to even buy ink anymore. It’s the cheapness that’s helped kill it off, bit by bit. First with putting the printing plant in Warren County- no doubt to avoid the high Montgomery County taxes- which they happily endorsed (they in effect, voted with their feet after only 30 years of paying for Sinclair Community College), their whittling of actual talent from the ranks- where they laid off their photographers (and lost a 2x Pulitzer winning photo editor, Larry C. Price- the story broke here on this site btw). They cut the news staff, they built a “national copy editing desk” pooling “talent” on the fourth floor, thinking all copy editors do is check grammar, and edit for length (I’m the son of a newspaper copy editor, who taught me that good editors check facts, do their research, and know their city better than the reporters to help make sure the story isn’t only factual and concise- but, fair and balanced.)

The sad fact is, Cox has invested in one horrible digital strategy after another. Their epaper is a total joke, they’ve built multiple websites for the paper, for the city, for the TV station, for the “news radio” station and tried to integrate “talent” but never understood their audience, or that no one but them thinks or cares what screen they get their news on- be it an iPad, Kindle, cell phone, desktop or even TV- it’s the news- and they want it on demand and time is valuable.

Not that the rest of the industry has it right. The New York Times has seen its subscriber base grow, but revenues drop. Their new iPad app, actually stripped features and fails at the basics of user interface design compared to their old app- but, at least it doesn’t suffer from sudden page scrolls with a random touch- so all can be forgiven.

Here’s the saddest part- rumors have it that reporters are now graded by how many clicks they can get online. They’re on Facebook trolling and clickbaiting for links and comments, they are writing headlines that any respectable journalist would scoff at. And sadly, none of them know how to monetize it properly.

While Google and Facebook are becoming the richest content companies on the planet- without any professionals making content, the “professionals” are failing. Hell, even the fake news has more eyeballs these days- with or without the Russians.

Why? Because they broke one of David Ogilvy’s rules. Was Ogilvy a journalist? Nope- he was a hotel kitchen worker who became a legend in the advertising business building one of the largest and most successful ad agencies in the world. His rule: “The consumer isn’t a moron; she is your wife” applies. We’re not interested in car crashes on 35, or local monkey sightings, we’re interested in actual news that affects us- how our leaders are performing, tax dollars invested, successful strategies paying off in business, opportunities to become more intelligent, better informed, well versed. Tips on making it in our city- and what will make our city better. Successful news outlets create a relationship between reader and story teller. This blog has about 2600 posts, and 26,000 comments. The refinement of the story, the enhancements of my readers, the community we’ve created, is what builds a stronger community resource- one that is actually of value.

I’ve built this site for the community- allowing others to have a platform. I’ve engaged, I’ve learned, I’ve listened, and over the years- I’ve built trust. So that when things are going wrong, people no longer call the Dayton Daily- they call me. It’s how I get tips that lead to stories like another pepper spraying of a restrained inmate or a school board members shaky residency (which lead to other revelations).

If Governor Cox could see what his skinflint offspring had done to the paper he worked so hard to build by his own hand (banks turned him down so many times, that when he built his offices at 4th and Ludlow he built it to look like a bank- it now sits at the middle of a mess caused by the city and his family) he’d rise from the grave and chisel his name off his tombstone.

The only reason to pay for the paper these days? Josh Sweigart , a reporter who seems to be the only one capable of single handily digging in and revealing the sad truths about our city that’s been left without the checks and balances a strong fourth estate is supposed to provide. Oh, and the obituaries, to find out who died (also often incomplete) and the bid notices. Other than that, it’s cliff notes of things you can find elsewhere- often with better writing and even a comments section that’s managed right- like, oh, that’s right- you’re reading it right now.

Not a big surprise at all. Hometown newspapers are in the decline stage of their life cycle. There are so many other options that will deliver news instantly, why wait until tomorrow to find out what is already old news given social media! While there is the potential for good/great reporting, it media just isn’t paper anymore! I get the big news from the Washington Post on my phone which is updated throughout the day. The demographics are against paper distribution of the news. To maintain it’s viability, the Dayton Daily should be providing really great content via social media and the internet, along with hard copy for the demographic that still clings to that. But, as that demographic dies (literally) readership falls, and so does the appeal to potential advertisers. To get it right, it takes personnel that can produce top quality content…good reporting, good reporters, etc., not hiring cheap and easy while cutting cost by eliminating the people that got them there!

You need to give some encouragement to DDN reporter Lynn Hulsey. From what I can tell, she is working hard and doing a good job.

While it is certainly amusing (and occasionally enlightening) to read it, touting this organ as some shining example of ‘getting it right’ just demonstrates how off the mark you are of late. I’ll take your word on the 26,000 comments cumulatively, but in the last 6-9 months you’ve been unable to inspire even 2 or 3 per post. IF you truly believe that first number denotes some accomplishment of connection and community has been built then that second number should point to a serious problem with it.

The DDN isn’t the only thing around here that has lost focus and gone off in multiple and seemingly random pointless directions.

Rob, The goal of this site isn’t clicks, comments, ad pages served. If it was- I’d have implemented Facebook comment integration years ago. The number of the comments on my posts has probably gone up exponentially- as well as readership- judging by bandwidth transferred. Many of the comment have moved to Facebook where I have an open public profile- and all these posts are also there. Glad you still read it- even if you think I’ve “lost focus and gone off in multiple and seemingly random pointless directions” I’ll admit- I’ve spent more time on the sad situation at the Dayton Public School board than ever before- but, never before have they had such incompetence at the top. examples from this post: BG Ya know…I was sensing a delay and repeat of news. I get the DDN daily and have been increasingly feeling like the paper was printing past news. I did not analyze but now it makes sense. Bummer. Thank you David! ? · Reply · October 3 at 11:40pm BRT I have had that same feeling. LikeShow more reactions · Reply · Yesterday at 12:52am AMG: Well, glad I didn’t decide to subscribe. Sounds like only the digital version would have recent news anyways. If I want delayed news, I’ll stick to Facebook. · Reply · Yesterday at 12:45am · Edited PO: Indy’s print center is more or less clear down by Columbus, IN, if that shows how loyal they are to the city they claim to cover. · Reply · Yesterday at 12:57am MT: I often wonder if they still had a competitor like when I grew up if the newspapers would have kept us in the know on news that really matters. But in their defense we have become the instant society and most people don’t want to spend time reading, w…See More · Reply · Yesterday at 5:41am VR: This tracks with their Facebook page which is always at least a day and a half behind on regurgitating clickbait that has been plastered everywhere. They irresponsibly drop “stories” on their page and then leave the… Read more »

…not interested in stories about monkey sightings? Speaking for myself, the Old Bandito always took delight in stories of simians running amok. And feel the lack of these
monkey-interest stories are the real reason for the demise of the DDN. Oh well…