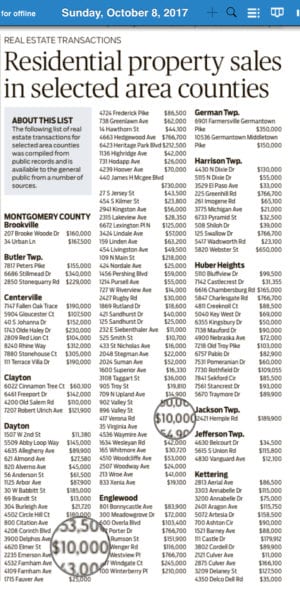 Only in Dayton is the $10K house a reality

Are you your neighbors keeper?

Every week I look at the listings of homes sold in Montgomery County and marvel, because only in Dayton can you buy a home for less than the price of a nice used car.

This doesn’t happen in surrounding communities (other than the depressed ones- Jefferson, Trotwood) . Do you wonder why?

It’s all supply and demand would be the perfect capitalists answer. But, what drives demand?

In real estate 101 they say “location, location, location” – and people choose communities based on the schools. And to some extent this is also correct. Yet, my house, bought for $14,500 in 1986 is worth close to 10x that, and a slightly larger home 2 doors down, just went for the same amount 7 years ago. It shouldn’t have sold that low, but it was a foreclosure. And, my property value dropped- not just because the price was low, but because of the cancer that moved in.

Four doors down, a house sold for $95K 3 years ago. The new couple put at least $40K into it before splitting. It sold in a day- price unknown, but for well over $125K. And my property values are sure to go up.

Yet, I didn’t change locations, and my schools still suck. My investments in my house shouldn’t penalize me with higher taxes anymore than what my neighbors do. The value will come to me, and to the community, when I sell.

How and why do the actions of others affect my property values? If I own a share of stock in 3M, does my value go up just because Apple had a great year? No. Yes, if I go to sell my car, and someone else paid X for a similar car- that’s the price- but, I’m not selling my home, I just want to live here. Why should my value change until I do something?

Simple answer- it shouldn’t. And, this constant re-valuation of real estate based on the actions of others is causing gentrification, housing bubbles, foreclosures, and a mangled economy.

The purchase price of an owner occupied home shouldn’t change until the house is sold. The same should be said of rental property. When the government steps in and raises your property value for taxation purposes, they become an uncontrollable variable in a business equation. They distort markets. They screw existing businesses and property owners when they offer tax abatement to the new guy, while the long term investor gets shafted.

And, it’s almost counterproductive to do improvements to your property, if the tax man is just going to charge you more. But, what could be worse? Your neighbor doing improvements.

Case study: Dr. Michael Ervin, shadow mayor of Dayton before he left town for Scottsdale AZ, bought a dump of a bar in the Oregon District and poured $1.6M into it. This skewed the valuation tables for his neighbors, who were thankful the bar left, but were asked to pay more for Dr. Mike’s excess. Some, couldn’t pay the additional taxes and were forced to sell or move. Others might have spent more on a crappy house, because Dr. Mike did what he did. The market skewed. But, 10 years later, when it came time to sell, Dr. Mike got less than half his money back on his taj mahal. Yes, it’s still double the value of any of the other single family homes- and still skews things, but, the only person paying the tax on the new market rate evaluation- $725K , should be the new owner. Just as the neighbors who never left, shouldn’t have been forced to pay more when the $1.6 boondoggle went in.

The reason we pay property taxes is supposedly to support public infrastructure and government to keep our investments safe. Income taxes are supposedly a more progressive tax that are supposed to be based on ability to pay. When property taxes unfairly start to penalize people for making a long-term investment that they hoped to keep- it’s wildly unfair, un-American.

The fact that almost every office building downtown has been foreclosed on, while tenants have moved to fairer pastures funded in part by tax dollars- with more advantageous tax structures (both income and property tax) like Austin Landing is proof positive that our property taxation and income taxation hodge podge is causing more problems than it’s helping.

The value of the Kettering Tower, once the premier office space in Dayton, was decimated by Dayton’s high income tax (now 2.5%) and property taxes based on market forces beyond the owners control. Would Austin Landing have looked so good, without the huge investment in infrastructure by the county, or the income tax free zone for white collar workers (while the retail underclass pays 2%)? Probably not.

It’s time to realize that tax policy and abatement has serious consequences to the entire region, and we need to find a way to level the playing field and stop letting the choices others make, affect our tax rates.

Regional tax policy, from property to income tax, needs to be set and managed at the county level, and by fair market forces, for all of us to live within our means, and to stop changing the playing field in the middle of the game.

We keep losing sight of the big picture regarding taxes. Government keeps trying to impose taxes that the typical voter doesn’t notice–like toll roads, telephone taxes, gasoline taxes. Splitting up major sources of revenue among income, sales, and property taxes is a dodge designed to make us all think we’re paying three low rates rather than one big one.

Property, sales, and those others are regressive taxes. Those with more means pay a lower percentage than those with little.

If we want tax fairness, first we need to eliminate every loophole. No deductions, no tax incentives, no exemptions. If the government wants to promote something, make it an expenditure that can be managed.

The next step toward fairness is to go to a progressive tax system. The only one of those that we know is a bracketed income tax; that is one where you pay more when you have more income, not when you spend more or own more. In addition to making the system more fair, think of how much businesses would save in the costs of compliance with sales tax collection, inventory taxes, property taxes.

If we implemented those two ideas, we could eliminate our required annual labor (or cost) involved in filing tax returns. The government could simply deduct the correct amount from payroll, or for the self-employed simply require reporting of profits at which point the IRS could send a bill.

What’s not to like–if you’re a pragmatist?

I am all for the government staying out of the economy as much as possible. There are, and have been, unintended (we assume) consequences for laws passed (case in point, ACA). Our tax structure is awkward at best. I have read the Fair Tax book, and find that system to be the best for our Federal tax system. I would favor a flat tax rate after a certain level of income, perhaps $20K, at the state level. Taxes based on ability to pay is Marxism (from each according to his ability, to each according to their need), and there is no room for that in this country. A huge key to the level playing field is much less government than we currently have, which means people being more self-sufficient and not expecting anyone else to take care of them. Fortunate for all of us, the early settlers didn’t come over here with their hand out. Not that they didn’t receive help, but it wasn’t because they had a mindset of entitlement. I don’t think that I am my neighbor’s keeper, but I do help my neighbors.

Scott, I couldn’t agree more. Couple the unfairness of our current tax structure with the stupidity of local voters who vote “Yes!” for every damn levy they see, and the result is the dreadful mess Montgomery County homeowners are dealing with today.

Scott, the notion that the wealthy should pay a higher proportion to support our society came originally from Adam Smith, “The Wealth of Nations”, the economics text on which capitalism was based. Calling a bracketed income tax “Marxism” is entirely wrong; in Marxism everyone pays everything to the state which then redistributes it–in Adam Smith’s capitalism, taxes are stable, transparent, efficient and levied based on ability to pay, with the wealthy bearing more of the burden.

I rarely agree with Libertarians, but these authors have it right.
https://www.libertarianism.org/publications/essays/what-can-adam-smith-teach-us-about-tax-policy

truddick,
Here is an except from the article you suggested.

Henchman and Stephens note Smith’s first maxim in their first definition of progressivity, arguing that even though Pennsylvania’s 3.07 percent income tax is one “flat” rate, payments increase in a linear fashion as income grows.6 This is a direct interpretation of the word “proportion” in Smith’s narrative. This, then, suggests that Smith would be in favor of a flat tax on income.