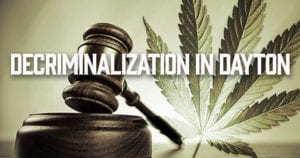 Curve ball out of Dayton City Hall last week when Mayor Whaley and her crew decided to toss a bone on the ballot to “check the voters pulse” on decriminalizing pot in Dayton. Not bricks of pot, nope- only the people who pay off the state officials will get to profiteer from medical pot, but, small amounts, enough for a few joints.

Normally, misdemeanor pot charges are an excuse to arrest and hold people who can’t afford bail, or to harass people of color. We’re filling up the jail with cheech and chong, while we can’t manage to find murderers, arsonists or even charge white collar criminals who steal money from disabled veterans.

By putting the question to the voters, the politicians have the appearance of doing the right thing, but, what it really is, is an attempt to get the black vote to the polls to make sure they support people like Brandon McLain and Gerald Parker and Carolyn Rice. After watching Gary Leitzell almost beat Debbie Lieberman without spending any money, some people in the dem party are now officially woke.

Yes, Montgomery County voted for Trump, and they are pulling out all stops to get people out to vote, because the “blue wave” that they predicted hasn’t really shown itself.

Members of the NAACP just got woke too. They were out gathering signatures to put the speed and redlight cameras on the ballot- and failed. Now they see that just 3 city commissioners can throw a ballot initiative on the ballot, without ANY signatures- has them a little ticked off. About time you realized you’ve been getting used by the party for years, but, you kept electing empty suits like they have downtown at Price Stores.

The reality of citizen initiated petitions succeeding in Montgomery County and most of the state is a myth- unless you have millions of dollars behind your issue. The recent effort to put the sales tax increase on the ballot was a clear sign that even a very popular issue, is almost impossible to make happen.

Try looking up how to recall a school board member in the Ohio Revised Code. There isn’t a standardized rule or format for doing it. Trust me, I’ve looked.

The people trying to repeal the sales tax increase were political insiders, lawyers, and even they were surprised at how fast the law required the petitions to be turned in- 30 days after the vote was taken. It’s almost impossible.

Instead of wondering about “hot button issues” in this next election for state reps- you shouldn’t care about guns, stand your ground, legal pot, you should be asking for reps that will actually clean up the ORC so simple law like the Open Meetings Act (I’m joking when I call it simple) is actually clear and concise with actual steps spelled out on the books. Instead, the Attorney General publishes a 250 page book to explain the damn law, that’s never resulted in a single politicians being removed from office despite that rule being on the books for over 60 years.

The first thing the Dayton City Commission should have changed by their ability to put new laws on the ballot- should have been a revamp of the petition to run for city commission. It’s time to eliminate the nominating committee requirement, as well as the notary requirement. The form needs to have a block to print your name, one to sign your name, your street address and date. No more ward or precinct. And, it should be assumed, that if a candidate collects 500 good signatures and turns them in, he’s offering to run for commission. What his/her signature adds to the petition is unimportant. If 500 voters say Donald Duck should be on the ballot- and Donald turns them in with the filing fee, that’s good enough. And, one last thing, the whole date of the election question needs a revamp too- since the idiots at the BOE can change the date of the primary seemingly randomly, and there might not be a primary if there aren’t enough valid candidates- so just say “to run in the next election” for the Dayton City Commission.

Voters SHOULD decide who they want on the ballot- not the parties, not the Board of (S)elections.

The pot issue should be approved. Minor quantity possession for personal use is not a threat to society- we’ve already approved it for medical use. The real question is, if this city commission really cared about our citizens safety and health and welfare- how can they let any citizens spend a single minute if Sheriff Phil “the torturer” Plummer’s house of horror- commonly known as the Montgomery County Jail?

If this wasn’t just a ploy to draw out votes in November- I’d be more enthusiastic about this good legislation, but unfortunately, it’s just Nan and Company trying to use the people of Dayton for their friends and family plan.

But if the turnout boost put Gasper over the top, and took your old friend Turner out of the house, would it be worth it?

In all seriousness, this will make Dayton a better place, and if more Westside voters turn out, that’s…a good thing, isn’t it?

This habit of acting like it’s some kind of outrage when politicians engage in politics is growing weary. Keep being outraged by injustice, but not stuff like this, which will probably a) increase turnout while b) making Dayton a better, more just place.

Truthfully, that’s the first thing I said when I heard about it. It’s relatively meaningless in the grand scheme, but her Whaleyness and company learned in 2015 how many people would come out in an off-year to vote on anything which involves pot. What better way to get out the progressives than an issue giving the casual user a green light? I daresay it wouldn’t have even happened had the NAACP been successful at putting her precious traffic cameras on the ballot!

Interestingly enough, if a person is found by law enforcement anywhere in the state of Ohio to be in possession of less than 100 grams of an illegal substance (marijuana for instance), they are charged with a minor misdemeanor in accordance with the ORC (state laws). The cop does not list a city ordinance or law when they cite the offender. They use the ORC. The person then goes to their municipality’s court system, and, if found guilty, are ordered to pay a fine.

It is a state law, not a city law…and this stunt by the city will do nothing to change the state law. Nan and her band of flunkies on the commission do not get to choose which state law they will enforce.

CdS: The report I saw said the city was going to put their own law in place. I think that means that instead of citing the ORC, Dayton Police will cite this new local law. They will probably just duplicate the current state law’s wording except they’ll remove the fine. Will you still go to court ? Seems like you’ll have to so there will still be court costs.