“I work for the president but like-minded colleagues and I have vowed to thwart parts of his agenda and his worst inclinations.”

Those words, published anonymously by the New York Times, may be the most dangerous words written in the history of our nation.

While so many had their panties in a twist about a Nike ad using former NFL quarterback Colin Kaepernick, which read “Believe in something, even if it means sacrificing everything” could very well have been the impetus for the “like-minded colleagues” to come forward. 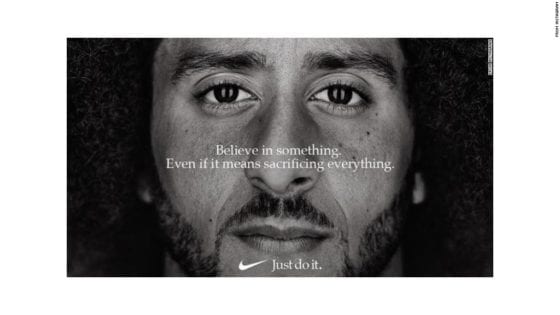 Very few people put the two events together. But we all should have.

When one enlists in the United States Military, as I did long ago, you raise your right hand and swear an oath:

I, _____, do solemnly swear (or affirm) that I will support and defend the Constitution of the United States against all enemies, foreign and domestic; that I will bear true faith and allegiance to the same; and that I will obey the orders of the President of the United States and the orders of the officers appointed over me, according to regulations and the Uniform Code of Military Justice. So help me God.” (Title 10, US Code; Act of 5 May 1960 replacing the wording first adopted in 1789, with amendment effective 5 October 1962).

Those words are commonly referred to by basic training instructors, boot camp DI’s and the like as signing a check to the US Government payable with your life. It’s serious.

And here we have the problem the “like-minded colleagues” (LMC) face, they have apparently decided that the president, is a domestic enemy and it is their role to support and defend the constitution over obeying the orders of the President of the United States.

And for that, we should be thankful, except by doing it anonymously, they are not stepping up and signing that check. What they are doing is called treason, and the President is right to be incensed.

One of the ways we test a theory to see if it applies is to use Occam’s razor to present two scenarios and test for the simplest answer: If the same LMC had tried to insert themselves into President Obama’s presidency as he tried to unwind the financial meltdown by anonymously announcing their intervention there would have been screams of racism, of subverting the democratic process. I’m not saying people didn’t interject themselves into his presidency- the bankers got exactly the bail-out they wanted, and the public got the bill, but, it was all done in relatively plain sight, and of course, Obama had won not just the electoral college vote but the popular vote- and let’s not forget that he isn’t bat shit crazy.

On the other hand, we have people burning Nikes, and screaming about how Kaepernick hadn’t sacrificed anything really, in comparison to, well, you name it. First of all, those words were not Kaepernicks, they came out of the braintrust at Wieden + Kennedy of Portland Oregon. No, they are not a political thinktank, they are an ad agency. Nike’s ad agency, and they are insanely great at what they do. They are also one of the largest independent shops left in the industry (independent as in not owned by some huge conglomerate of ad agencies- not as in politics). This campaign was well thought out, measured and did exactly what it was supposed to do- generate free promotion, move Nike to the forefront of the consumers mind and boost sales- which it did and will win huge awards for.

Kaepernick is just the model. But a model with a brain, a voice and who is lucky enough to have a corporation ready to back him up. Because, just like in politics these days, the size of your soapbox is directly correlated by the size of your bank account (or your “supporters” bank account).

As I’ve said before, we have the best politicians money can buy. Still.

And that’s part of the problem with President Trump, he’s defied all odds, and continues to befuddle the betting money. All the “Never Trump” Republicans fear that his supporters which ruled over so many of their districts, will not tolerate disobedience to the new emperor, even though they are well aware that he has no clothes and is bat shit crazy. Not in that they truly believe that his policies will solve all America’s problems, but that he’s caused confusion as to who their true allegiance needs to be sworn to- the president and his “deplorable followers” or the money that has kept them in power for so long.

Elections are no longer as predictable as the gerrymandered maps used to guarantee. Some crazy ass socialists have already won over incumbents who used to be safe and solid establishment folks. We can’t love all of Trump- because some of his character faults are reprehensible even to us (take your pick from philandering, to Russian interference, to the good Nazi’s of Charllotesville).

And now, we have this gift- there is a resistance, an underground secret society, working to protect America from the dilettante dictator in the making. If I manage to squeak by in my election, and the Special Prosecutor finally does make his case for removal from office for Trumps defecation over the rules of decency that used to be in place for our political system, as flawed as it has become, to work, we can say “I was part of the resistance” – I now have “plausible deniability:”

Although plausible deniability has existed throughout history, that name for it was coined by the CIA in the early 1960s to describe the withholding of information from senior officials in order to protect them from repercussions in the event that illegal or unpopular activities by the CIA became public knowledge.

And that’s what Kaepernick doesn’t have. He has actually taken a stand by taking a knee in front of “God and Country” to protest what he sees as injustice. Of misappropriation of power, of the protection of those in blue who have lost their perspective on what “to serve and protect” means. Of the discount of human lives, especially of black ones, who seem to have a separate standard applied to their loss of life without judge or jury- just an executioner.

Just this week, a white female police officer in Dallas entered an apartment and shot a black man and wasn’t immediately arrested and charged with manslaughter. Yes, we have a problem. Kaepernick has clearly stated over and over why he kneels. Many choose to ignore it. And of course ignorance is bliss.

Ignorance is the enemy of democracy and trust is the bedrock. We may claim to be a secular country, but on our money, the currency of our political system, it’s there for all to see “In God We Trust” as if the power of the greenback really isn’t what props the whole thing up. In the end, it’s trust.

Those LMCs have a problem. They have broken our trust. If they are indeed senior officials, they have not done what the constitution requires which is to sign your name to your claim. They have cowardly tried to have their cake and eat it too. They have not sacrificed everything. They have endangered the very bedrock of our democracy, by thumbing their nose at the rules and saying “trust us” without question. That is unacceptable.

While the New York Times was right to publish the essay, they created a political football.

Our legislators swore an oath of office after all, and Kaepernick just played football.

We can’t afford a fumble on this one. To the LMC- sign your names or resign. To the rest in Congress, you’re in the game, it’s time to demand a President who plays by the rules again.

Trust is what makes civilization and democracy possible, and it can’t be bought and sold, it must be earned. And yes, there is a price that comes with it. Some are willing to pay the ultimate price and some, just want to pay lip service. Now is the time to separate the true patriots. My bet is still on Kap.