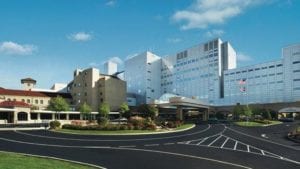 The people of Dayton have paid for Good Sam many times over by allowing the corporate thieves pretending to be a non-profit, Premier Health “Partners,” escape paying property taxes with the excuse that they provide health care to all. It’s been an accounting slight of hand for years and it should be stopped. You aren’t a non-profit when your CEO and top management is making over a million a year. End of story. You aren’t a non-profit when you can have your own private police force. Let’s cut the crap and move forward.

Premiers plan to demolish a community asset and do us a favor is a lie. But, since they’ll fight tooth and nail to stop competition from coming in, like The James, The Cleveland Clinic or Cincinnati hospitals, we need a non-hospital use for the building.

Hello Sheriff Phil “the torturer” Plummer. Sheriff Phil complains that half his over populated jail is filled with drug addicts and mentally ill folks. Actually, one in the same Phil, but you still think busting a drug dealer will stop the epidemic, nice try, but no.

We could convert Good Sam into desperately needed mental health wards and rehab facilities- that are secure, but better suited to deal with the problem than mixing that population with actual criminals. Having specialized health care professionals take charge instead of rent-a-wanna-be-cops (sorry to the professional correctional officers, the last few of you that haven’t been fired by the torturer).

With an average census of about 450 people (take the jail’s overcrowded 900 inmates, divide in half) that would nicely fill up about half the capacity of Good Sam- but given actual treatment takes longer than processing these people through the in-justice system, the population could climb to double that- or more. There are plenty of times when police who pink slip a citizen can’t find a bed at either Premier or Kettering’s facilities- because the number of psych beds is severely limited.

Even with 900 people in treatment, there would still be room for more folks. Here is where we could either place transitional housing for the chronic homeless (many of whom could also use mental health treatment). With the huge garage, providing a secure place to park (many homeless live out of their cars) we’ve started to tackle yet another chronic problem.

And, if we can shoe horn one more program in, transitional housing for new immigrants with an intensive ESL program. While Catholic Social Services may think that they are doing a great thing by plopping families into urban neighborhoods after coming out of countries where they don’t have grocery stores or public transit, teaching them together as a group- and working at acclimation together may create a higher success rate. Yesterday a car flipped in Walnut Hills as a driver tried to avoid a kid running into the street- because, well, the kid didn’t know what a street was yet.

While Premier may not want to have to compete with a community mental health facility, and the people of West Dayton might not be happy about housing a bunch of crazy folks or drug addicts, the reality is, it beats an empty lot on Salem and a jail downtown that’s so overcrowded that it’s become a death trap.

And, btw, please feel free to take this idea as your own and run with it. I seem to have lost all credibility for giving an old lady heckler the finger at the Montgomery County Democratic Party.

Ahhhhhh, if only “those who have ears, could hear,”. Dave!! How many more great already-built buildings, and solid ideas of great merit will our city allow to be torn down or discarded without even a twinge of conscience or regret? Think of all the people who are needlessly suffering within our city now who could be soothed, helped, lifted and supported if your VERY excellent suggestions were to be implemented! Dayton could begin to shine again and stand out as a city of great promise and progress as it was back in the mid-1900’s. The inertia in this city when it comes to positive needed change is overwhelming. Time to vote-in entirely new boards and bodies city and countywide!

It makes so much sense that the powers that be will never go for it!

And even if TPTB went for it, there is no profitable money line for mental health services that would keep the lights on. Premier already has a rehab center opening up in the North. This was probably one factor that contributed to Good Sam’s closing. It is so damn disgusting that Mary Bosalis makes nearly $8 million a year with a nursing degree from an unremarkable, match-book nursing school. But she is part of the insular group of miscreants that get all that is good in beautiful Dayton.

And just who would pay for all this

What with the opiold epidemic, if Premier could find it in their heart to offer the property and buildings, maybe the City, County or State could come together and find funding to really do something constructive to solve this problem that is not going away!

@Butch- we’re paying for it now. Over $10M in settlements and more in legal costs. Never mind the amount of petty crimes people with mental illness and addictions cause.